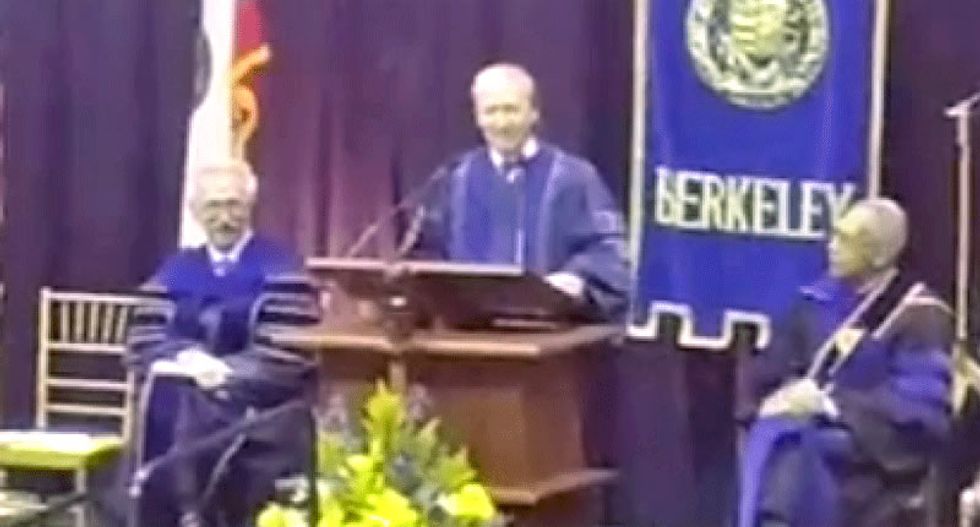 Comedian Bill Maher spoke at the University of California, Berkeley's winter commencement on Saturday, despite calls for the school to cancel his appearance over his perceived Islamaphobia, the San Jose Mercury-News reports.

Maher was greeted by loud cheers before his 15-minute address, in which he briefly mentioned the student-led protests against his appearance by ironically noting that it was the 50th anniversary of the Free Speech Movement started at Berkeley.

"I recognize that this university, on the fiftieth anniversary of the Berkeley free speech movement, made a statement by choosing me for this speech, and I would like to say I appreciate that, and I’d also like to say: I think you made the right statement," he said.

Maher also implored the students to make a difference, just as their forebears on that campus had during the Vietnam era.

"We need a place to live," he said. "We’re humans. We need a crib! And the world desperately needs a generation -- your generation -- to make this a priority the way the Vietnam generation, on this very campus, made stopping that war a priority."

"All over the world," Maher continued, "we see the devastation that pollution is causing -- heat waves, oceans that are dying and rising, glaciers melting, species disappearing, droughts, wildfires, Frankenstorms. This is an awful lot for Pat Robertson to blame on gay sex."

Despite the innocuous nature of his speech, many on the campus silently protested his appearance, both outside the venue in which the commencement was held:

As well as inside the building itself: