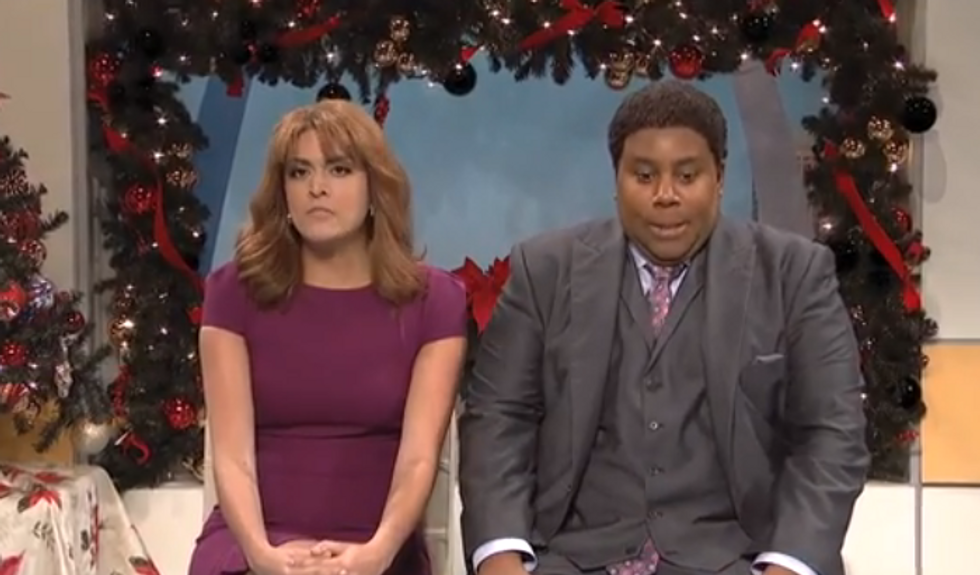 In a skit dropped from Saturday Night Live due to time constraints, cast members Cecily Strong and Keenan Thompson portray hosts of a St. Louis morning happy talk show, "Rise and Smile," attempting to put on a happy face while protesters and police battle in the streets of Ferguson.

Introduced by a grim-faced new anchor reporting on the protests, lamenting "our community will never be the same," the two hosts are seen looking despondent, with Thompson saying, "Can we just show a rerun or something?"

Told they are live, the two soldier on, telling viewers to "rise and smile," before pleading with the producer to not run the overly-perky show jingle to no avail.

After asking Strong how she spent her weekend ("Spent it holding a fire place poker and protecting my property, so why don't we skip the chit-chat and talk about some weekend events") the two press on.

What follows is a series of malapropisms, misunderstandings, an air traffic reporter wanting nothing to do with the city, and a visit with a celebrity chef unfortunately named 'Darryl' Wilson who, when shunned, claims, "I'm the real victim here."

Watch the video posted to YouTube by SNL Sunday morning: