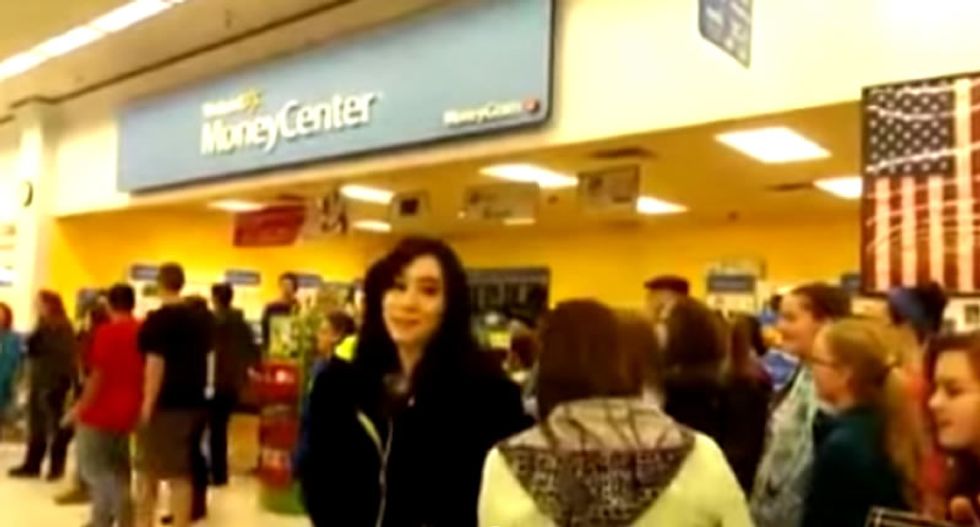 Video of a Walmart manager kicking out caroling teens in Oregon went viral over the weekend, KOBI TV reports.

On the video, a group of high school students from Henley High School in Klamath Falls, Oregon can be seen singing a popular carol about spreading Christmas cheer in front of Walmart's Money Center when a manager -- who refused KOBI TV's interview request -- comes on the store's intercom system and demands the students leave.

"Did she just say what I thought she said?" one concerned mother on the video asked.

"She said, 'I'm calling law enforcement or you have to go,'" another parent replied.

Stacy Kerns, the parent who recorded the video, wrote on Facebook that "[m]y daughter and Henley chores [sic] were doing a flash mob at are Wal-Mart and the co manager corrie [sic] told the kids in the middle of the song to leave it they would call law enforcement on the kids. Make this go viral people please!"

The manager also told Kerns that Walmart "is private property and we cannot take pictures or videos."

Walmart policy on "flash mobs" -- even those composed of teen Christmas carolers -- has become more strict in the wake of both last year's labor disputes, in which workers attempting to unionize would show up unannounced and impede shoppers, and last week's "die-in" at the Walmart store where police shot and killed John Crawford III.

Watch video of the children being kicked out below via KOBI TV on YouTube.