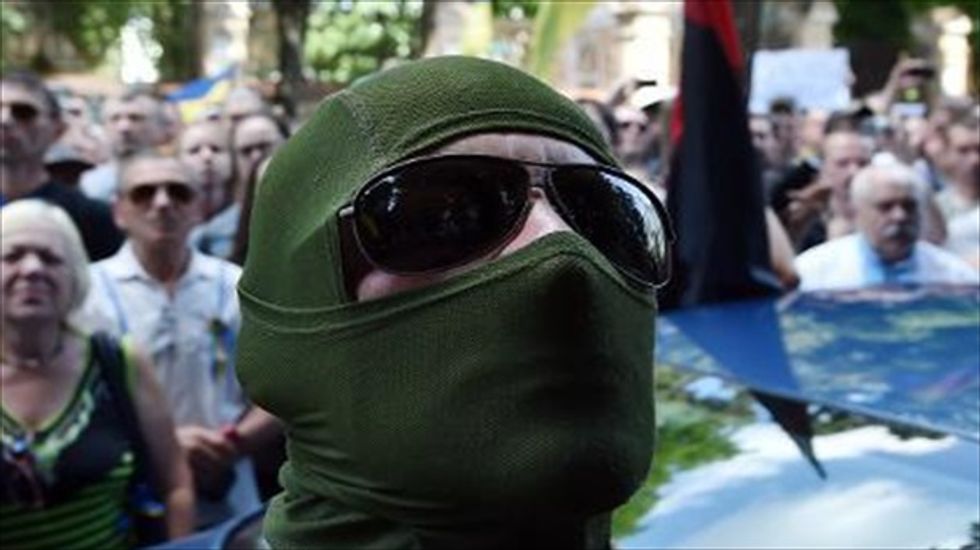 Donning bullet-proof jackets, a score of foreign journalists clamber aboard an armoured vehicle headed for Ukraine's front line as Kiev flexes muscle in the propaganda war with Russia.

For the first time since the April start of its "anti-terrorist operation" against Kremlin-backed separatists, the Ukrainian army is staging a "press trip" to counter Moscow's powerful media machine.

The fighting has spiralled since then into a full-blown conflict claiming more than 4,700 lives.

But reporters, including those from AFP, have often found it easier to work with pro-Moscow rebels than with government forces, and complain about the difficulty of interviewing Ukrainian commanders in the field.

"We're trying to be open to journalists as far as is possible so people know what's happening in the conflict zone," said Stepan Poltorak, Ukraine's defence minister, ahead of the trip.

At Ukrainian checkpoints, journalists can be stopped for hours as soldiers verify papers and are often turned back. Both the defence ministry and intelligence services claim the restrictions are due to security.

Vetted by the defence ministry in Kiev, the reporters are taken to the front line of the war-ravaged east in a convoy that includes two armoured vehicles and an ambulance.

In Debaltseve, a strategic town on the route between the two main rebel redoubts of Donetsk and Lugansk, the commander in charge of the section, Oleksandr Krasnuk, says "the situation is under our control."

Unlike ravaged Donetsk airport, where fighting has probably been the most intense and attracted much media attention, little is known about hard-to-reach places like this town.

Yet Krasnuk says that just in the last weeks, Ukrainian soldiers "came under attack 341 times between November 18 and December 22 and, in order to save their lives, had to return fire."

One Ukrainian army position on the town's outskirts is barely 200 metres (yards) from the rebel front line and since the start of the latest ceasefire on December 9 has been subjected to dozens of artillery bombardments, Krasnuk says.

Oleksiy, a soldier keeping guard at the back of stone and sandbag fortifications, says he hasn't seen a single journalist in months.

But the Kiev-loyal local authorities say residents are getting back on their feet. "Life is returning to Debaltseve, 65 percent of the inhabitants have returned to their homes," says Oleksandr Papayona, head of the local council.

For Ukrainian media expert, Natalia Ligacheva, officially organised trips to the conflict zone can prove "useful" for Kiev but are not enough to counter the ferocious media onslaught directed against the country by Russian media and the rebels it backs.

Ligacheva thinks the government needs to increase its own English-language output.

But the most simple solution, she says, is one that Kiev has been reluctant to try: simply to let journalists cover the war independently.