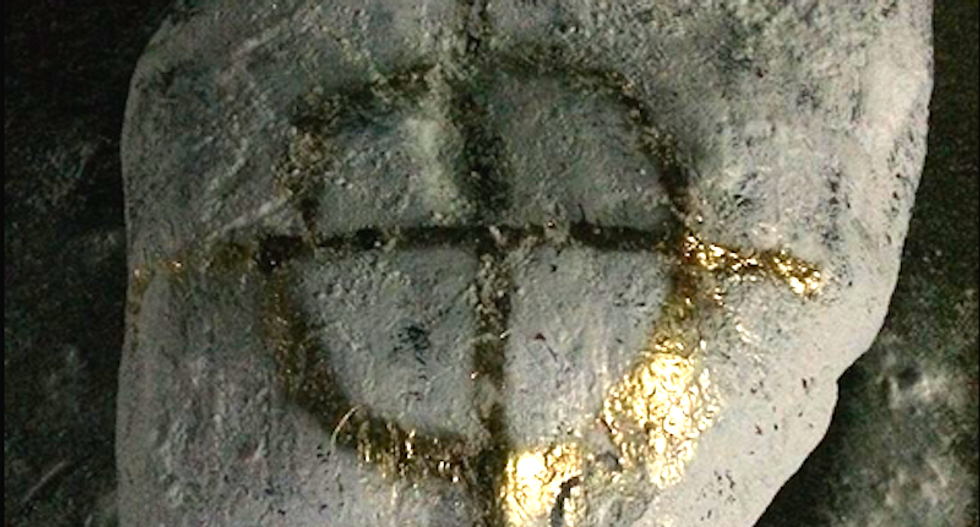 Vandals spray-painted a white supremacist symbol over a previously vandalized show of support outside a Michigan school for Ferguson protesters.

The rock was painted Nov. 25, the day after prosecutors announced that a Missouri grand jury declined to indict Darren Wilson in the fatal police shooting of Michael Brown.

The vandals painted a pair of hands and the words, “don’t shoot,” on one side of the rock near the school’s football stadium.

The other side was painted with the words, “We stand with you Ferguson.”

The rock was moved Thursday night to the school’s parking lot and repainted white, along with a Celtic cross – a symbol used by white supremacist groups.

"Even kids who don't agree with the Ferguson protestors are upset,” said senior Olivia Stier.

The newspaper reported that the rock was repainted its usual color, blue, sometime over the weekend, along with the words, “LN supports Ferguson.”

The rock was returned to its original spot Monday and repainted blue.

“The Loy Norrix Spirit Rock is intended to carry messages of school support,” said Alex Lee, spokesman for Kalamazoo Public Schools. “While we can certainly understand and sympathize with the emotions involved around the death of Michael Brown, we cannot and will not tolerate vandalism or messages that promote hate."