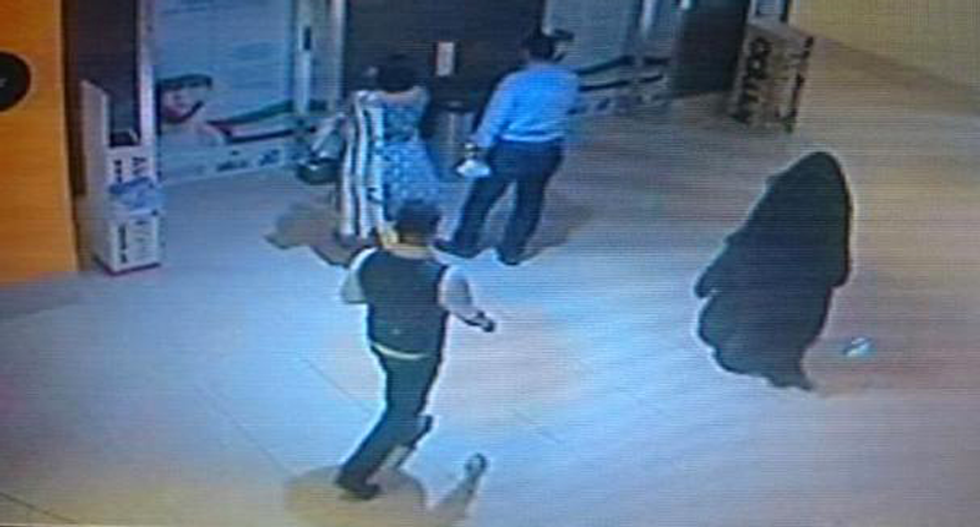 A CCTV image released by Abu Dhabi police on December 3, 2014 shows a fully veiled woman -- the chief suspect in the murder of a US teacher -- walking through a shopping mall in the Emirati capital (AFP)

A United Arab Emirates woman who killed an American teacher last week has been inspired by "terrorist ideology" acquired through the Internet but investigators have found no links to militant groups, the state news agency WAM reported on Sunday.

Attacks on Westerners are rare in the UAE, a wealthy western allied oil exporter and tourism hub, but concern has been rising following a spate of attacks in neighboring Saudi Arabia and after a warning in October about a jihadist web forum calling for attacks on American teachers in the region.

Police on Thursday said they had arrested the UAE national last week after the kindergarten teacher, identified as Romanian-born Ibolya Ryan, a mother of 11-year-old twins, was stabbed and killed in a toilet at an Abu Dhabi shopping mall.

The unidentified woman also placed a makeshift bomb outside the front door of an apartment of an Egyptian-American doctor living in the UAE less than two hours after Monday's killing, police said adding that the bomb was safely dismantled.

WAM, quoting a security source, said that investigation of the woman showed that the "crimes she had committed are the result of a personal instigation and a lone terrorist act."

"The suspect had been visiting some terrorist electronic websites, which are widespread on the Internet and which had enabled the detainee to acquire the terrorist ideology and to study bomb-making," the security source said, according to WAM.

It said explosives seized by police showed they are of the primitive kind.

WAM said the investigation also showed that the woman had not planned to kill an American but was looking for a foreigner to attack at random.

"As such, these crimes are considered to be of one's personal instigation and a lone terrorist act that is so far not linked to any terrorist organization," the agency said.

The suspect had been filmed on security cameras at the mall wearing a traditional black Arab robe and gloves.

A spate of attacks on Westerners in neighboring Saudi Arabia has raised concern there that the assaults may represent the start of a "lone wolf" campaign by jihadi militants.

Supporters of the Islamic State group in Iraq and Syria have urged Muslims to attack Western expatriates in retaliation for U.S.-led air strikes on its fighters. The UAE has participated in the air campaign and is a strong opponent of a variety of Islamist groups.