Young actor gets Robin Williams' help asking a girl to prom: 'The most awesome 3 minutes of my life' 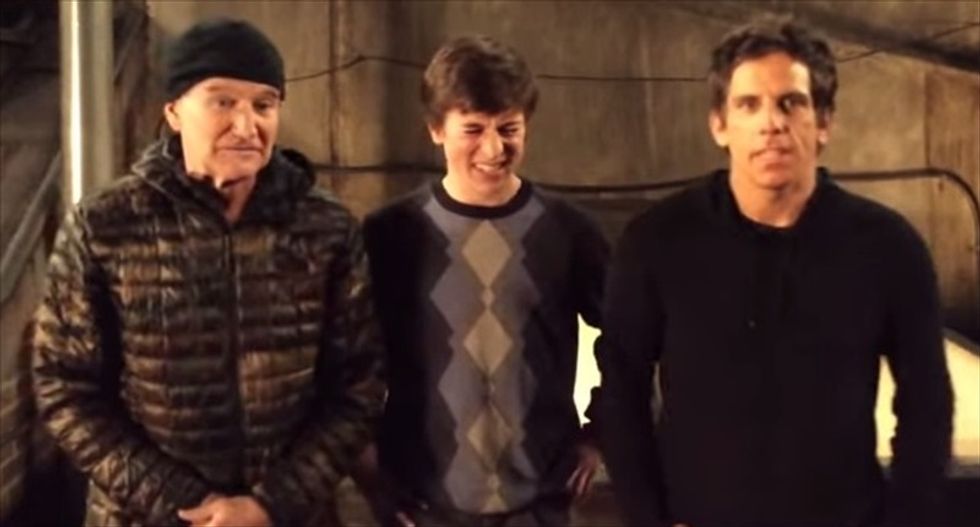 Robin Williams' brought the same energy to a 3-minute "Prom-posal" that he would to any other production, a young co-star recalled to The Hollywood Reporter.

"Robin was this bottomless reservoir of kindness and hilarity," 17-year-old Skyler Gisondo said. "It was just so special to work so closely with this guy who's movies I've grown up with and watch his preparedness and his kindness."

Gisondo enlisted Williams and Ben Stiller during the filming of Night at the Museum: Secret of the Tomb this past spring to help him film a video asking a girl, Hillary, to the prom. The film, which opened last weekend, features Williams reprising his role as former President Teddy Roosevelt, while Gisondo plays the son of Stiller's character, night watchman Larry Daley.

"Yo, Hillary, will you go to the prom with my man here, my man 'Sky-lar'?" Williams asks in the video.

About a minute into the video, Gisondo thanks the two stars for their help. Williams tells him, "Do your thing," then starts calling for dancers to enter the scene, saying, "Sell the dress!"

Seconds later, "Crystal," the monkey featured heavily in the film series, appears with a rose for Gisnodo and climbs on his shoulder.

"It's just so beautiful," Williams says. "A monkey and a rose, that's so Freudian."

Gisondo told THR Williams was pitching ideas leading up to the filming of the video.

"It turned into this three-minute, ridiculous thing. A prom-posal," he said. "I realized that was the most awesome three minutes of my life and I've accepted it will go downhill from there."

Entertainment Weekly reported that Williams, who died this past August, will also be featured posthumously in a voice-acting role in the British comedy Absolutely Anything, which is scheduled for release next year.