Anti-Muslim crimes soar in France in wake of Paris attacks 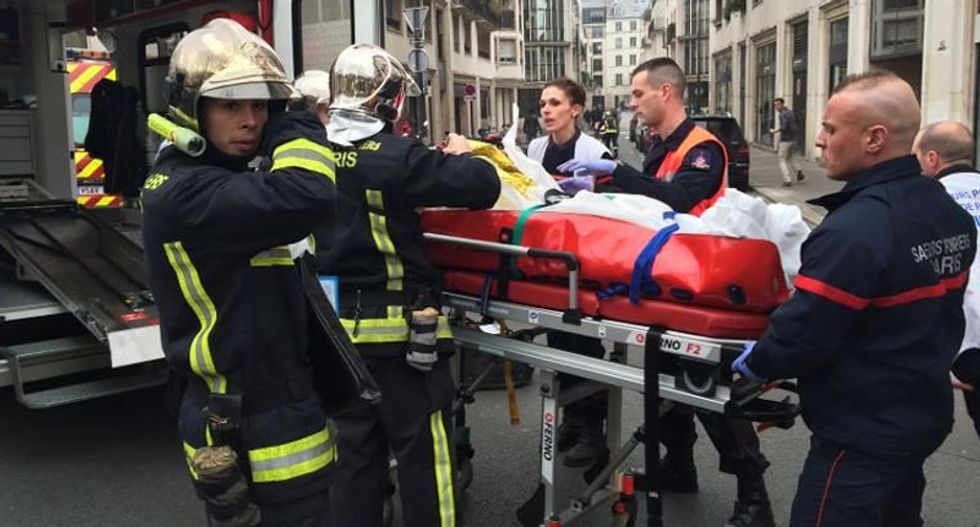 Firefighters carry an injured man on a stretcher in front of the offices of the French satirical newspaper Charlie Hebdo in Paris, on January 7, 2015 (AFP)

The number of anti-Muslim incidents in France has soared since the Islamist attacks in Paris two weeks ago, an organisation that tracks Islamophobia said Monday.

The National Observatory Against Islamophobia said 116 anti-Muslim incidents had been reported to authorities since the January 7-9 shooting spree by three French jihadists that killed 17.

The two-week tally was more than double the number of incidents recorded for the full month of January 2014, the observatory said, reporting 28 attacks on places of worship and 88 threats.

The observatory's president, Abdallah Zekri condemned the "acts of hatred towards French people of the Muslim faith, the immense majority of whom respect the values of the Republic and secularism."

"This situation is unacceptable and we're asking the authorities to go beyond the reassuring speeches and act to put an end to this scourge," he said.

Islam is France's second-biggest religion with an estimated 3,5-5 million followers.

Several mosques have been attacked since the Paris killings, which began with a massacre at Charlie Hebdo satirical weekly and ended with a bloody hostage taking in a Jewish supermarket.

In several towns shots have been fired at mosques and racist slogans daubed on their walls. In Corsica, a pig's head was hung on the door of a prayer hall.

President Francois Hollande and his government have repeatedly warned against tarring all Muslims with the extremist brush.

In a speech last week Hollande reiterated that "Muslims are the main victims of terrorism."

A portion of the 10,000 troops mobilised last week to boost security have been assigned to protecting mosques.

Some prominent political figures have, however, defied calls for unity, with remarks seen as fanning anti-Muslim sentiment.

A senior member of the far-right National Front (FN) representing the party in the European Parliament, Aymeric Chauprade, declared in a video last week that France was "at war with some Muslims".

"We're told a majority of Muslims are peaceful. But a majority of Germans were also (peaceful) before 1933 and national socialism," he said.

FN leader Marine Le Pen, who has joined mainstream political parties in warning against confusing Islam and fundamentalism, distanced herself from Chauprade's remarks.