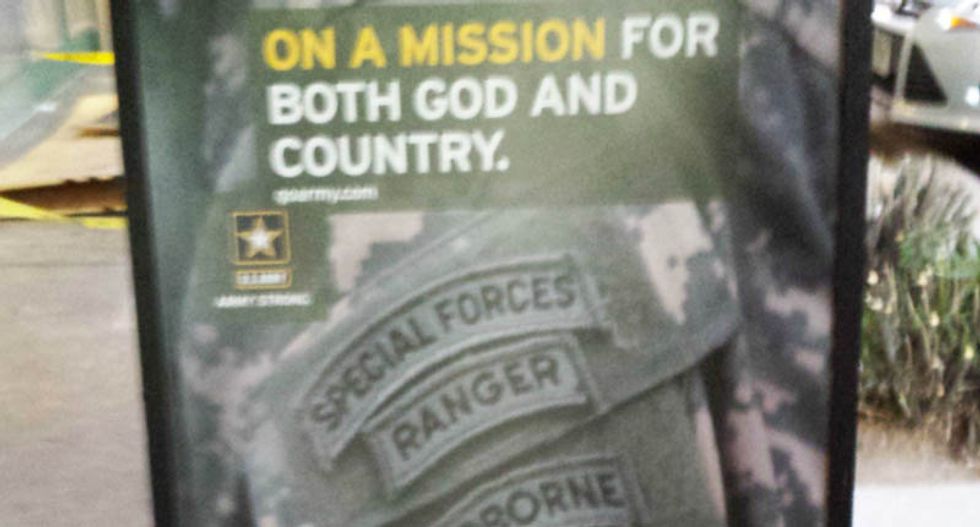 An unauthorized poster with the phrase "On a mission for both God and country" on display outside of a Phoenix Army recruiting center was removed Friday morning following complaints, reports The Army Times.

The poster -- which had been in use for months -- came to the attention to Army commanders following an uproar begun by a post by Mikey Weinstein, president and founder of the Military Religious Freedom Foundation, on the Daily Kos website.

In his post, Weinstein wrote, "WE at MRFF were hardly prepared for the stunning, unconstitutional disgrace we confirmed from client reports as recently as yesterday."

"There it was; an in-your-face, proselytizing, U.S. Army officially-approved (goarmy.com) recruiting poster on prominent display at an Armed Forces Career Center in Phoenix, Arizona," he continued. "That outrageously ghastly graphic encapsulates precisely that which we’ve been ceaselessly calling the attention of the American people to for all this time."

The poster features a stock image of an Army Special Forces patch along with Ranger, Airborne and Special Forces tags, that the Army makes available for local recruiters.

According to Army spokesperson Brian Lepley ," ... the text was changed by the local recruiting personnel" and had not cleared by command headquarters.

"Had the process been followed, the copy shown would not have been approved," Lepley said.

Lepley explained that local recruiting offices order display materials online and the orders are filled by Accessions Support Brigade. The ASB catalog shows a similar image available as signage, with the tagline reading: "We don't call for reinforcements. We make them."

The catalog also provided instructions for customizing the poster to suit a local audience, with 47 suggested taglines, none of them using the 'God and country" line.

In a statement, Weinstein praised the Army for responding so rapidly to complaints.

"The Military Religious Freedom Foundation is delighted that the Constitution has been adhered to by the U.S. Army Recruiting Command," Weinstein said . "But whoever, in any way, shape or form, allowed that poster to be designed, prepared and displayed, those individuals should be aggressively investigated and very visibly punished."

According to Lepley, the Army Recruiting Command is investigating who ordered and approved the display.