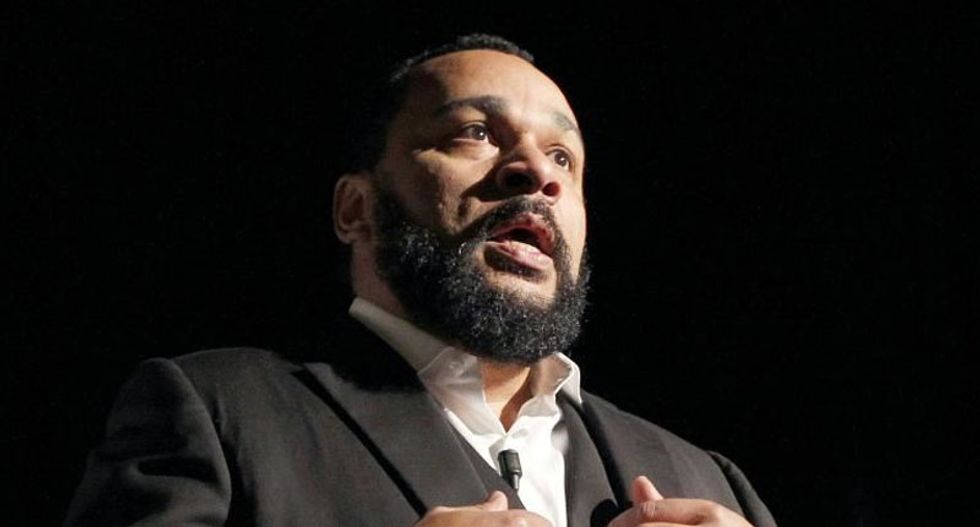 French comedian Dieudonne, seen here in 2012, is a controversial figure whose trademark 'quenelle' hand gesture looks like an inverted Nazi salute, a claim he denies (AFP)

Notorious French comedian Dieudonne was arrested Wednesday for condoning terrorism over a comment suggesting he sympathised with one of the Paris attacks gunmen, in a move that sparked a debate about free speech.

Prosecutors had opened the case against the comedian on Monday after he posted on his Facebook page "Tonight, as far as I'm concerned, I feel like Charlie Coulibaly" -- mixing the popular slogan "Je suis Charlie" used in homage to the slain Charlie Hebdo magazine journalists with a reference to Islamist gunman Amedy Coulibaly.

Coulibaly killed four Jews at a supermarket on Friday and a policewoman the day before.

Dieudonne's arrest is one of 54 cases that have been opened in France for "condoning terrorism" or "making threats to carry out terrorist acts" since last week's Islamist shootings that left 17 people dead.

His lawyer David de Stefano said his arrest was "shocking."

"We are in the land of freedom of expression? This morning, the government provided the demonstration of that," he said sarcastically.

Dieudonne is a controversial figure who has made headlines in the past, most notably with his trademark "quenelle" hand gesture that looks like an inverted Nazi salute, but that he insists is merely anti-establishment.

Last year, French footballer Nicolas Anelka was banned for five matches by English football authorities for using the hand gesture during a match.

Branded a "pedlar of hate" by the government, Dieudonne has also attracted controversy over sketches widely viewed as anti-Semitic that have occasionally prompted local authorities to ban his shows.

Nevertheless, the polemicist's arrest over his Facebook post has sparked huge debate over where freedom of expression starts and ends, particularly after France has for days vaunted the importance of free speech following killings that took aim at journalists among others.

The arrest has sparked all the more debate in light of the controversial nature of Charlie Hebdo itself, which has in the past provoked significant outrage.

One of the magazine's front covers that is circulating on social networks, for instance, dates from October 2012 and was titled "Mohamed Merah, come back! They've gone mad."

Merah is the Al-Qaeda militant who went on a killing spree in southwestern France in March 2012, murdering seven people including Jewish children and soldiers, and the magazine said it had purely wanted to mock the proliferation of ultra-radical Islamist networks.

"Freedom of expression and condoning terrorism, I'll let you be the judge," one Twitter user said, above a picture of the 2012 front cover.

Dieudonne made his Facebook post after attending Sunday's unity march against extremism that brought more than 1.5 million people onto the streets of Paris in the wake of the attacks.

He dismissed the march -- considered the biggest rally in modern French history -- as "a magical moment comparable to the big-bang".

Interior Minister Bernard Cazeneuve described the Charlie Hebdo remark as "contemptible" as he visited the heart of Paris' Jewish community on Monday, and Dieudonne has since removed it from his Facebook page.

But he has left his response to the interior minister's comment, accusing the government of trying to "ruin my life" when "I am only trying to make people laugh".

Since late last year, when a law aimed at fighting the threat of jihadism was adopted, condoning or inciting terrorism is subject to much harsher sanctions than it once was.