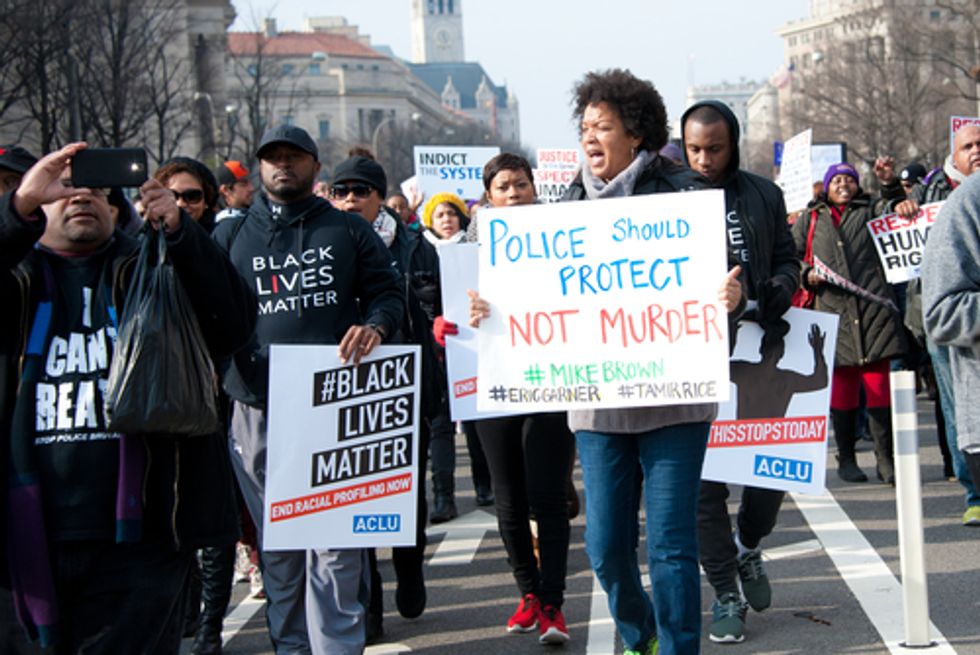 Man, we are getting ever closer to a situation where 100% of conservative arguments are naked bad faith. Take, for instance, this situation in Pittsburgh, where police chief Cameron McLay is being castigated for the most benign stand possible against racism.

Big deal, right? The only way you could actually be offended by this is if you're a straight-up racist and really, truly don't want anyone standing up against your, um, "values" system. But bigots tend also to be cowards and aren't going to come right out and say that they want racist cops on the force. So instead the bad faith arguments get trotted out. Howard McQuillan, the president of the Fraternal Order of Police in Pittsburgh, was all a-flutter with feigned outrage, writing an email that says, "Our current Chief of Police (is) insinuating that we are now racist, merely by the color of our skin and the nature of our profession. I say enough is enough!"

Is there any evidence that McLay, a white man who is a police officer, thinks that being a white police officer automatically makes you a racist? Asking the question demonstrates how only someone who is too dumb to operate a keyboard could actually think so, which means that McQuillan's pose was not one of genuine concern about anti-white racism, but a bad faith argument designed to protect racists from criticism.

Similarly, Tucker Carlson was on Fox News trying to silence anti-racists by playing the "being against racism is the real racism" card. Missouri state Sen. Maria Chappelle-Nada has the bigots all bent out of shape because she wrote a tweet saying, "When you exercise your #WhitePrivilege, don’t think I’m not going to remember. I will use it for the future. Uncomfortable?”

Carlson exploited this by posing about how the real racism is noticing when white people are racist. “It’s not just that she’s obviously an extremist, but she’s a race hater. She attacks people based on the color of their skin, that’s just not a good thing. That’s not moral. It’s wrong. It shouldn’t be allowed," he said, making actual demands to revoke a person's right to free speech, as opposed to the usual conservative whining about how merely criticizing them is an assault on free speech.

Look, I think Chappelle-Nada's tweet was poorly phrased. She makes a really common and irritating mistake that's all over lefty Twitter, which is treating "privilege" like it's a choice or a behavior, when in fact the whole idea of "privilege" was constructed by sociologists to describe automatic benefits accorded to people despite what choices they may make. She also makes the mistake of thinking that the privileges in question are inherently bad things, when in most cases, the problem isn't that they exist but that they aren't shared more equally. For instance, it's a white privilege to not have to worry about being shot by the cops for minding your own business. However, the way to rectify that problem is not to start shooting random white people, but to expand this privilege until it's a right that everyone enjoys, regardless of race.

But it's clear that, even though she used the word "privilege" in a way that doesn't really work, she was criticizing people for choices and behaviors, and not by the mere fact that they were born to a bunch of unearned privileges, as evidenced by her use of the word "exercise". The most you can say critically in good faith is that her tweet is an example of the limitations of the word "privilege" and the dangers in trying to use it outside of its original conception of a way to discuss unearned and often unconscious ways that social hierarchies play out. But it's clear that she was trying to convey a general disapproval of people who actively fight to preserve these social hierarchies, and that  is what offended Carlson. But instead of having the courage of his convictions and saying, hey, he thinks certain things---like being unafraid of police---should remain as privileges given to whites only, he busts out this disingenuous reverse racism crap.