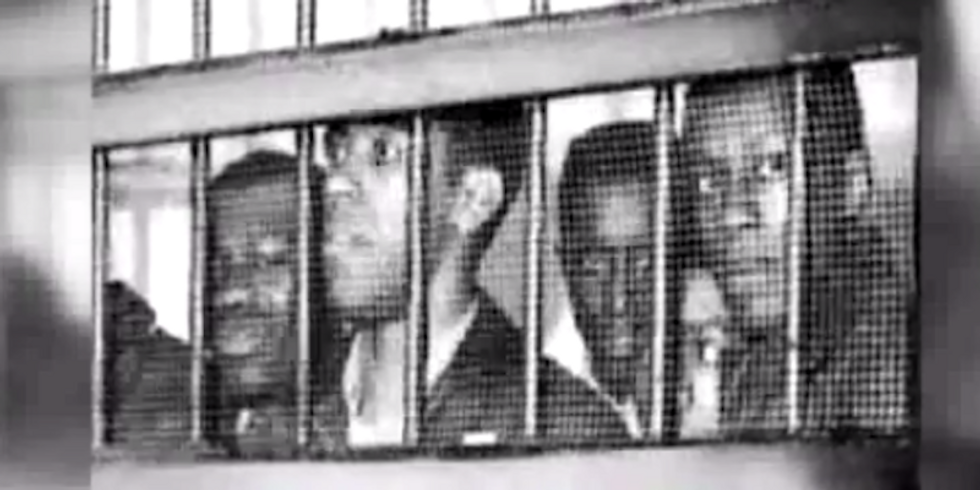 File these stories under "This week in Justice Delayed/ relative progress/ baby steps/ Black Lives Matter a Little" news: a Black woman who never should have been convicted for firing a warning shot to scare off an abusive husband is "allowed" to serve the rest of her sentence at home under house arrest. And a judge threw out the convictions of 9 Black men who had sat at an all white lunch counter in Rock Hill, South Carolina in 1961.

Marissa Alexander was sentenced to 20 years in jail for shooting a wall and harming nobody. She was attempting to scare off her abusive then-husband, Rico Gray, who had admitted to and against whom she had a restraining order. Thinking he was not at home, Alexander went to their former house to get some belongings. The two got into an argument and, according to Alexander, Gray threatened her. Gray corroborates Alexander’s story: “I was in a rage. I called her a whore and bitch and … I told her … if I can’t have you, nobody going to have you,” he said, in a deposition. When Alexander retreated into the bathroom, Gray tried to break the door. She ran into the garage, but couldn’t leave because it was locked. She came back with a registered gun, which she legally owned, and yelled at him to leave. Gray recalls, “I told her … I ain’t going nowhere, and so I started walking toward her … I was cursing and all that … and she shot in the air.” Gray himself understands why Alexander fired the warning shot:

Gray also admitted Alexander was acting in self-defense, intending to scare and stop but not harm him: “The gun was never actually pointed at me … The fact is, you know … she never been violent toward me. I was always the one starting it.” Ultimately nobody was hurt. Nobody died. On May 12, 2012, a jury took 12 minutes to find Alexander guilty of aggravated assault. She was sentenced to 20 years in prison.

In 2013, Alexander was granted a new trial because of erroneous jury instruction. The seemingly sadistic State Attorney, Angela Corey, who insisted Alexander was “angry" and "not in fear," when she shot the gun to scare off her abuser, was much more successful in convicting Alexander, who had no blood on her hands, than she was George Zimmerman or Michael Dunn, a white ban who shot and killed an unarmed Black teenager over the loudness of his music. So, it's not surprising that Corey was, once again, overzealous in her prosecution of Alexander and actually tried to triple the sentence to an unbelievable 60 years!

But this past November, Alexander plead guilty to three felony accounts, was sentenced to three years in jail, and had the 1,030 days she has already served deducted from her sentence. Tuesday, she wass allowed to go home, but will be forced to stay under house arrest and to wear an ankle monitor. She will only be able to leave the house to seek employment.

Of course, this is relatively good news, for a woman who was supposed to spend 20 years in jail. But it's absurd that Alexander was ever convicted in the first place and that her sentence hasn't been overturned.

Alexander's case highlights the racist double standard found in the way the "Stand Your Ground" defense is applied. When George Zimmerman fatally shot an unarmed teenager, the police decided not to arrest him because of the Stand Your Ground law. When Zimmerman was finally put on trial, his lawyers cited Stand Your Ground. Ultimately, he was acquitted. Alexander, who killed nobody and was being threatened by a large man with a record of abuse, was denied a Stand Your Ground defense and imprisoned.

This pattern is more than anecdotal. The Tampa Bay Times found that defendants claiming “stand your ground” are more successful if the victim is black. Seventy-three percent of those who killed a black person faced no penalty. Only 59 percent of those who killed a white person got off. The Urban Institute determined that in “stand your ground” states, when white shooters kill black victims, 34 percent of the resulting homicides are deemed justifiable. When black shooters kill white victims only 3 percent of the deaths are ruled justifiable.

The next story is far more straightforward, legally speaking. The "Friendship Nine" consist of eight then-students at the Friendship Junior College in  Rock Hill, South Carolina-- W.T. "Dub" Massey, Willie McCleod, Robert McCullough, James Wells, David Williamson Jr., John Gaines and Mack Workman-- as well an activist with the Congress of Racial Equality, Thomas Gaither. All of them were Black. On the morning of January 31, 1961, just after 11 a.m., the Friendship Nine arrived at McCrory's 5-10-25 Cent Variety Store in downtown Rock Hill, sat at the lunch counter and were arrested for trespassing. The nine men made history when they decided not to pay their bail. They became the first sit-in-protestors to serve out their sentence. In this case, 30 days of chain-gang labor. This strategy, of "jail, no bail," would become popular in the Civil Rights Movement. It not only saved the Civil Rights Movement the money they were spending on bails, but made undermined the legitimacy of Jim Crow laws. Professor Adolphus Belk, Jr., of Winthrop University, explained, "Rather than assuming the financial responsibility of paying that fine, it shifted it to the system. I suspect if the Friendship Nine didn't do what they did in January, 1961, the sit-in movement would have died."

On Wednesday, Ernest A. Finney, Jr., the same man who represented the Friendship Nine in 1961, entered the motion to have the sentences tossed out. The 83-year-old, who would become the first black Chief Justice of the South Carolina Supreme Court since Reconstruction, said,

would it please the court, today I'm honored and proud to move this honorable court to vacate the conviction of my clients. These courageous and determined South Carolinians have shown by their conduct and their faith that the relief that they seek should be granted. I move for the convictions entered in 1961 to be vacated.

Amazingly, the judge, Circuit Court Judge John C. Hayes III,  is the nephew of the judge who sentenced the "Friendship Nine" to jail in 1961. When the younger Hayes announced that the convictions and sentences were officially vacated, the 250 people in the courtroom broke into a 20-second standing ovation.

These are two examples of progress, but the progress is too slow and, in the case of Alexander, too little.