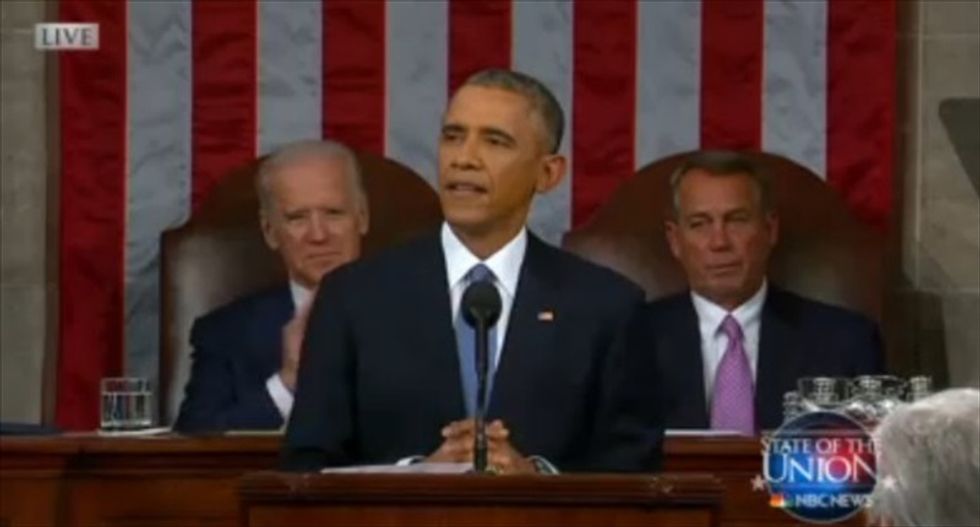 If President Barack Obama wanted to show Republicans on Tuesday he hopes to work with them this year, his aggressive body language and off-the-cuff gibes may have spoken louder than his words.

Obama gave his hour-long, annual State of the Union address on Tuesday night to the first fully Republican-controlled Congress of his presidency, and the mood was anything but conciliatory.

Pumping his arms, waving his index finger and gesturing with his hands, the president argued his policies had made the country stronger.

Although he admitted having flaws and promised to seek Republican ideas, he deliberately avoided giving the impression that the balance of power in Washington had shifted away from the Oval Office that he will occupy for two more years.

"I have no more campaigns to run," he said, causing a smattering of Republican applause, followed by laughter.

That did not sit well with the competitive president, who ad-libbed immediately: "I know 'cause I won both of 'em."

Obama won the White House in 2008 and 2012, but Republicans won a majority in both houses of Congress in 2014. The president acknowledged that with a host of veto threats in his speech.

He also spiced up his remarks with a wish that the government not "screw things up" on the economy. The phrase did not appear in his prepared remarks.

Obama's body language and verbal barbs were not the only theatrics on display.

Republican Speaker of the House of Representatives John Boehner, who sat behind Obama, kept a serious look on his face for much of the night.

Vice President Joe Biden, who sat beside Boehner, looked giddy, blowing a kiss to his wife, Jill, who sat in the balcony with first lady Michelle Obama.

Choreography played a key role in the speech and its long rollout. The White House began announcing the key policy proposals from the address two weeks ago, getting the "news" out in the open before the big night.

Then on Tuesday, some 15 minutes before Obama started speaking, the White House deliberately broke its own embargo, posting a copy of Obama's remarks online for all to see.

The White House website also featured a movie-like trailer complete with a soundtrack, hashtags and reference to Biden's infamous expletive when the president signed healthcare reform into law: "It's a BFD." Translation, minus the bad word: Big (freaking) deal.

Back in the chamber, lawmakers engaged in the obligatory ritual of standing and applauding when they agreed with the president's words, or sitting grim-faced when they did not.

Some waved pencils in solidarity with the victims of the recent shootings at a satirical newspaper in Paris. Alan Gross, recently freed from a Cuban jail, mouthed: "Thank you, thank you" to Obama when the president addressed him with "Welcome home, Alan."

Spots of color jazzed up the chamber, mostly via female lawmakers' outfits. But Obama wore a dark suit and signature blue tie, despite an adviser's joke on Twitter suggesting that he had donned the tan number that garnered immense attention when he wore it at a White House briefing last year.

No surprises in the duds at least.