Breadbaghazigate and other GOP 'rising star' State of the Union flameouts 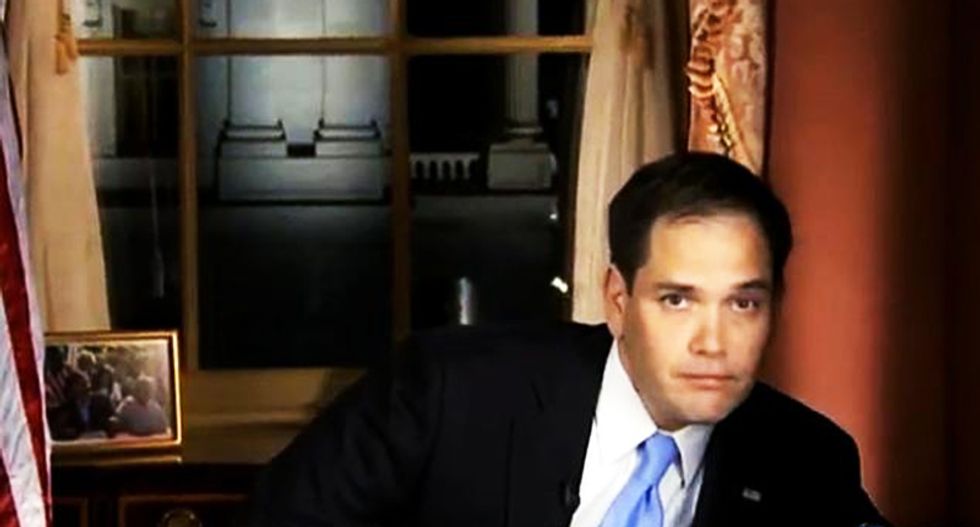 Because the Founding Fathers weren't sure if this whole Experiment in Liberty thing was going to pan out -- I give us a C+ so far, next time show work, America -- they required the President to "from time to time give to Congress information of the State of the Union," thereby giving Congress the option of 'going in another direction,' like they always say when an NFL coach gets fired. Since we always more or less do what the framers of the Constitution say -- with exception of 'well-regulating' fully automatic high-powered death-dealng muskets -- the President each year gives a State of the Union speech which is an exercise in theater and gamesmanship and little else.

The president doesn't have to go to Congress and actually speak; he could just as easily send them an email or post something on his Facebook page which they could either like, share, or even unfriend him after posting a picture of the White House lawn turned into a watermelon patch... if that person happens to be Steve Scalise.

What is even worse than the president's speech is the obligatory response from the opposing party generally delivered to dead air without even a laugh or applause track to liven it up and let Fox News viewers when something pithy has been uttered.

During the Obama administration-- or as it is known on Fox: "The Illegal Occupation of America by the Socialist Black Panther Muslim Homosexual Married To A Wookie, also too #Ebola #Benghazi #AmericanSniper #TCOT "--  the SOTU responses have run the gamut from forgettable to "Let's just pretend this never happened."

Much is made of the lucky guy or gal who is tabbed to give the address, although I'm beginning to think it has devolved into something along the lines of a frat hazing or possibly thrust upon the person who loses a drinking game. You have a choice: either give the response or we get to draw dicks on your face and then you have to go to the mall and hang out in front of the Victoria's Secret store on Friday night. Your choice.

Let's run down the memorable and not so memorable GOP SOTU responses and the people -- "rising stars," all of them --who have made them during these dark years that have led us to this horrible state of lower unemployment numbers, a rebounding economy, expanded healthcare, and $2 gas.

2009 presented us with Louisiana Governor Bobby Jindal, a "rising star" in the GOP, who proceeded to give a widely mocked "aw shucks, won't you be my neighbor" performance; speaking as if he was addressing a group of suspicious three-year-olds who couldn't figure out if he was white or black or what the hell. Immediately compared to 30 Rock's amiable goof Kenneth the page, Jindal saw his political stock plummet. Since that time Jindal, who is widely regarded as being smart, has retreated into bitterness and bile and stupidity and seems to be auditioning for a future gig as a Fox News idiot. If only he had blonde hair to toss...

In 2010 we were treated to blow-dried meat puppet Gov. Bob McDonnell of Virgina, another GOP "rising star" with presidential or vice-presidential aspirations.  So, how'd that go? Nobody remembers and it really doesn't matter now because he's going to prison and so is his wife.

2011 was the year of GOP "golden boy," blue-eyed granny-snuffing Rep. Paul Ryan. He ran as Romney's running mate in 2012, and couldn't even deliver his own hometown to the ticket, losing it by 25 points. Wah wah waaaaah -  sad trombone. Ryan is now the only Republican, living or dead,  not running for President in 2016.

Indiana Gov. Mitch Daniels landed the 2012 gig. Who? Mitch Daniels... D..a..n..i..e..l..s. Mitch. C'mon, man! Mitch Daniels.... him. That guy.  Okay, anyway, his response didn't launch Mitchmentum and the only thing he is president of these days is Purdue University. He is also the whitest white man in America and makes Mitt Romney look like Lil Wayne. Also, too:  Mitch was a former "rising star."

2013 really saw the GOP hit their stride when " rock star" Florida Senator Marco Rubio was picked because he's young, he's brown, and he's hungry. Well, actually he was thirsty. Very very thirsty, and the only thing people think about when they hear Rubio's name is a flop-sweaty over-his-head youngster nervously grabbing and gulping a bottle water during a bout of either stage fright or teleprompter panic or both.  The next day, that was all anyone talked about. What did Rubio say? Dunno, but dude was super thirsty.

2014 was the Republican Year of the Woman, and "rising star" Rep. Cathy McMorris Rodgers was selected from the GOP's slim binder of women. Not wishing to make it look like McMorris was  an awful mother who had abandoned her children to a Mexican maid while she went to work in an office, the GOP staged her in a living room that that can best be described as "grandma chic." She was pleasant enough in a "your mom is kind of cool, I guess" kind of way. But as she complimented America for trying so hard, you got the feeling viewers were waiting for her to break out the bowl of sliced oranges for everyone to nibble on while receiving their 'Democracy Participantion' ribbons. Okay, everyone in the van now and let's go to Hardees for ice cream shakes!

Pig-castrating, Hardee's biscuit-maker Sen. Joni Ernst of Iowa -- your new Michelle Bachmann with the crazy laugh in place of the crazy eyes -- gave it her best shot last night.  Ernst -- who is yet another  'rising star' --was an inspired choice because, as Charlie Pierce notes, she stays on script and doesn't go rogue and let her Agenda 21 "the UN is gonna grab our guns and golfcourses" off the leash in public. Get the loony laugh under control, and maybe we can call good enough, 'great enough.' But then whoever wrote her speech had to stray into "I was a poor white girl who had to ride the school bus wearing bread bags on my feet" territory and everyone was hunh, what? Redolent of tying onions on our belts  "which was the style at the time," bread bags has become Ernst's version of Rubio's watergate.

It's really a no-win and bridge to nowhere situation for anyone who gets picked to deliver the SOTU response because everyone is now hate-watching it like they do those terrible NBC live musicals, looking for something to mock and then the slightest derp moment gets magnified all  out of proportion and can become a defining moment in a politician's career.

Maybe next year, when someone loses at GOP SOTU duck-duck-goose and becomes 'it' they should laugh like this:

Escobar's lawyered-up hippos recognized as people by US court

In a first, a US court has recognized animals as legal persons -- specifically, the descendants of Pablo Escobar's hippopotamuses who have thrived in Colombia since the notorious drug lord was killed almost 30 years ago.

The ruling came after the nonprofit Animal Legal Defense Fund (ALDF) filed an application seeking to allow two experts in nonsurgical sterilization of wildlife to provide testimony supporting a Colombian lawsuit to stop a cull.

Campaign in US against 'stealthing,' secret removal of condom during sex

One day while having sex with a date, Brooke had a terrifying realization: "there was no longer a condom on."

"At that moment, my heart kind of sank," said Brooke, whose name has been changed for her privacy.