Cartoons and tears at funerals of Charlie Hebdo victims 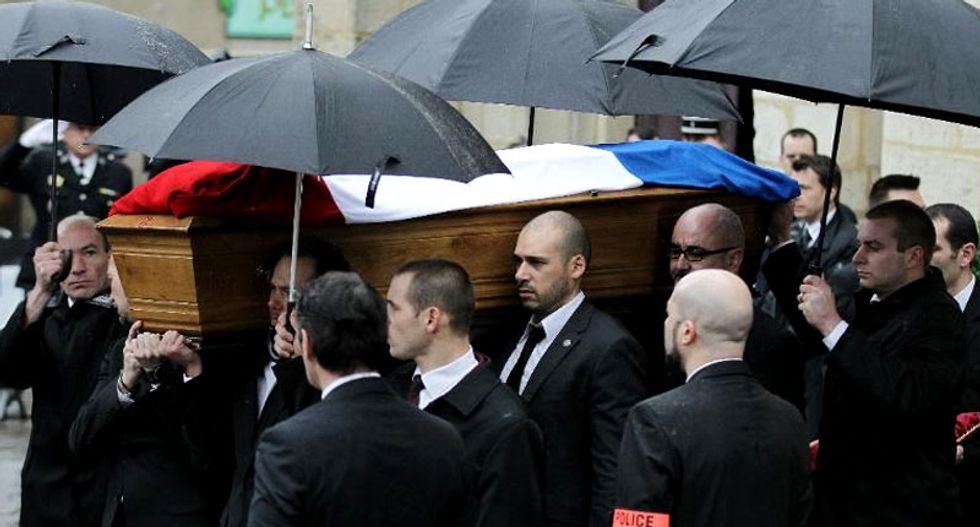 The coffin of Franck Brinsolaro, the police officer charged with protecting late Charlie Hebdo editor Stephane Charbonnier, is carried outside the Sainte-Croix Church during his funeral on January 15, 2015 in Bernay, France (AFP)

Both 80-year-old Wolinski and 57-year-old Verlhac, who signed his drawings Tignous, were buried in Pere Lachaise cemetery in Paris, final resting place of generations of artists, musicians and politicians.

At his funeral in the eastern Paris suburb of Montreuil, Verlhac's coffin was covered in messages and drawings, one of which depicted a "paradise survival kit".

A cartoonist friend of the comic strip author remembered him as a "very nice man" who would arrive to dinner in a restaurant with bundles of Charlie Hebdo issues for fellow patrons.

"We and our friends at Charlie will continue his quest for truth against stupidity, with his nobility and sense of fun," he vowed.

Cartoons also featured at the funeral of Wolinski, with one of the last drawings on which he was working before being gunned down by brothers Cherif and Said Kouachi hanging on the wall of the Pere Lachaise crematorium.

A fan of jazzman Miles Davis, whose music was played at the service, Wolinski was best known for his curvaceous female figures.

Cayat, the only woman killed in the attack by the Kouachi brothers, was buried in the capital's Montparnasse cemetery.

In the northern town of Bernay, over 1,000 people packed a church for the funeral of the 49-year-old officer shot dead while guarding the editor known as "Charb", who drew many of the cartoons of the Prophet Mohammed that sparked the ire of Islamists.

At the end of the ceremony, the mourners, led by teary police officers, burst into applause.

Emotions also ran high at the funeral in Montgiscard, close to the southwestern city of Toulouse, of leftist economist and radio commentator Bernard Maris, 68.

Known to fans of his Charlie Hebdo column and public radio slot as "Uncle Bernard" Maris was feted for his ability to put economics in layman's terms.

His friend, controversial novelist Michel Houllebecq, whose latest novel imagines France being ruled by a radical Muslim president, was among the mourners.

Charb is to be buried Friday in Pontoise, west of Paris.