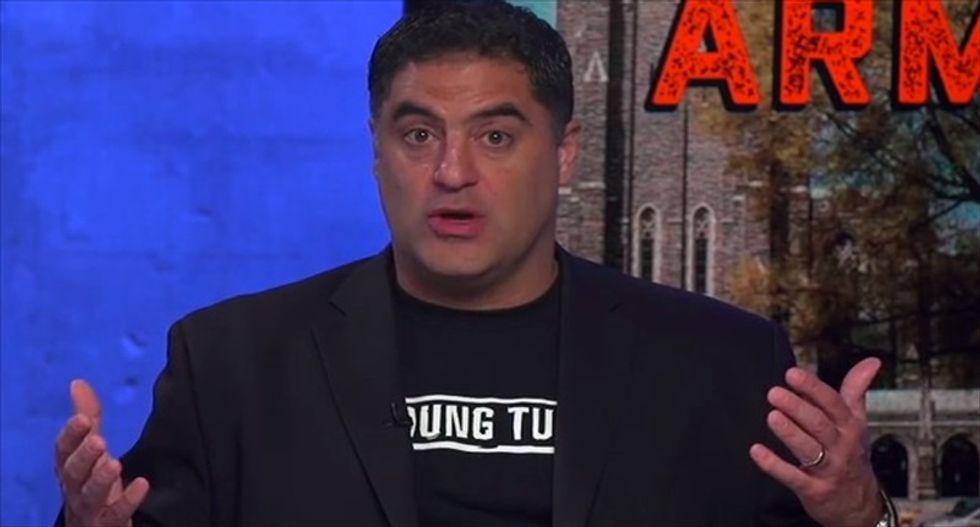 Young Turks host Cenk Uygur blasted the Rev. Franklin Graham on Friday for contributing to the cancellation of a planned Muslim prayer event at Duke University, accusing him of the kind of religious absolutism Graham claims to oppose.

"There's not a question about it. Franklin Graham is a grotesque bigot of the biggest variety," Uygur said. "He would feel really at home in things like the Taliban, ISIS, al-Qaeda."

The university had planned to allow the Muslim call to prayer to be "moderately amplified" from the bell tower inside the campus chapel. But Graham, as well as other religious conservatives, immediately berated the idea, with Graham saying on his Facebook page that Duke alumni and donors should stop giving the school money unless the event was scuttled.

"As Christianity is being excluded from the public square and followers of Islam are raping, butchering, and beheading Christians, Jews, and anyone who doesn't submit to their Sharia Islamic law, Duke is promoting this in the name of religious pluralism," Graham wrote.

The university subsequently announced on Thursday that it canceled the use of the chapel, citing safety concerns.

Co-host John Iadarola noted that Graham's post quickly amassed more than 70,000 "Likes," while Uygur admitted to feeling like the U.S. had reached a scary point.

"Or weren't defending them, in this case," Iadarola chimed in.

Co-host Maz Jobrani, who emigrated to the U.S. from Iran, pointed out that this type of Islamophobic sentiment flourishes in other parts of the country. Over the holidays last year, Jobrani said, his neighbor's young relative from Wisconsin was shocked to encounter a Sikh man for the first time at a movie theater.

"Six-year-old kid from Wisconsin, jaw drops," Jobrani said. "Turns to me and goes, 'That guy was ISIS.'"