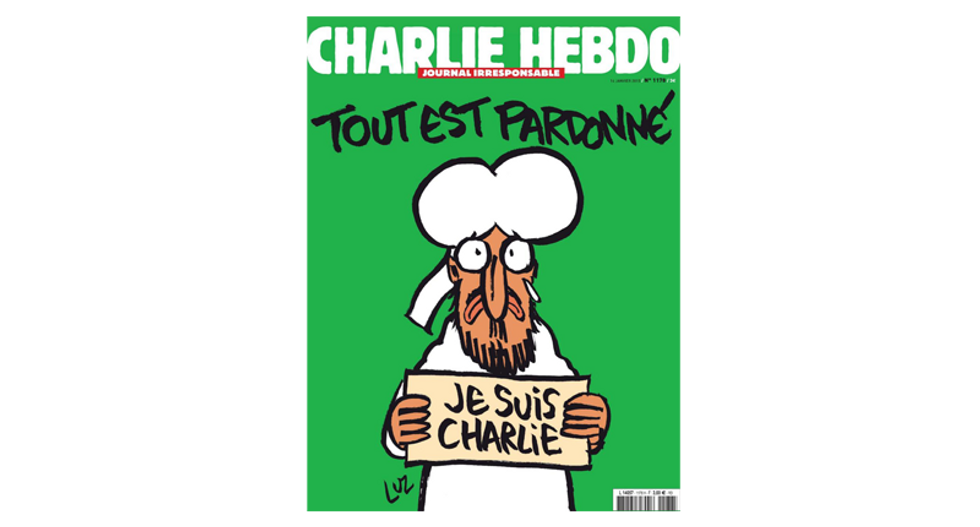 French satirical magazine Charlie Hebdo defied the attackers in last week's bloodbath by putting a cartoon of the Prophet Mohammed on its next cover, as the government on Monday announced the deployment of 10,000 soldiers to boost security.

The weekly released the front page of what it called the "survivors' issue", due out Wednesday, featuring a crying Mohammed in a white turban and holding a sign that reads "Je suis Charlie" under the words: "All is forgiven".

The issue will be the first since two Islamist gunmen stormed Charlie Hebdo's Paris office on January 7 and massacred 12 people, saying they were taking revenge for previous publications of Mohammed cartoons -- considered deeply offensive to many Muslims.

In a further show of defiance, the magazine announced it would print three million copies -- not the usual 60,000 -- when it reappears on newsstands this week.

Charlie Hebo has become an international symbol of free speech since the massacre and a second attack two days later at a Jewish supermarket. A total of 17 people were killed in the twin rampages.

Nearly four million people -- including 1.5 million in Paris in the biggest rally in French history -- demonstrated across France on Sunday to denounce the killings. Many carried signs with the now internationally familiar slogan "Je suis Charlie" (I am Charlie).

Seeking to reassure a jittery nation in the wake of the attacks, French officials announced the unprecedented deployment of thousands of soldiers to boost security, including at Jewish schools.

"We have decided... to mobilise 10,000 men to protect sensitive sites in the whole country from tomorrow (Tuesday) evening," Defence Minister Jean-Yves Le Drian said after an emergency security meeting.

"This is the first time that our troops have been mobilised to such an extent on our own soil," he added.

Another 5,000 security officers were also part of the reinforcements.

As investigators looked into possible intelligence failures that allowed the attacks to happen, a debate gathered pace over whether France's security bodies need greater powers to combat home-grown terrorism and the flow of jihadists back and forth from Syria.

Prime Minister Manuel Valls said one of the Islamists responsible for last week's attacks that rocked France -- Amedy Coulibaly who gunned down a policewoman and four Jewish shoppers at a kosher supermarket -- likely received help from others.

"We think there are in fact probably accomplices," Valls told French radio. "The hunt will go on."

But Le Monde newspaper warned against the "temptation" of enacting a French version of the US Patriot Act, rushed in after the September 11 2001 attacks to give security agencies sweeping new surveillance powers over US citizens.

Such was the secrecy around the US law that only the revelations of whistleblowing intelligence agent Edward Snowden 12 years later laid bare the extraordinary scope of government snooping.

Meanwhile, Washington acknowledged it made a diplomatic misstep when it failed to send a high-ranking official to join world leaders attending Sunday's mass march in Paris.

Only the ambassador to Paris was sent, a decision that provoked ire in France. "We should have sent someone with a higher profile to be there," White House press secretary Josh Earnest said.

New details emerged of the scene inside the Jewish supermarket where Coulibaly, who said he was working in concert with the two Charlie Hebdo killers, briefly took hostages on Friday before being killed in a police assault.

A woman who survived the siege told Europe 1 radio that she watched as a fellow hostage tried to snatch the weapon wielded by Coulibaly.

"A young man took the assault rifle and wanted to shoot him," but Coulibaly "was faster and he shot him in the throat. The poor young man just fell," said the woman, who gave her name only as Sophie.

She said Coulibaly dealt ruthlessly with another hostage.

"Someone wanted to leave -- he shot him in the back," she said.

Israeli Prime Minister Benjamin Netanyahu visited the scene of the hostage drama at the kosher supermarket in eastern Paris on Friday.

To cries of "Bibi, Bibi" -- his nickname -- and under extensive security protection, Netanyahu paid tribute to the four Jewish men who died at the store.

They were to be buried in Israel on Tuesday.

Interior Minister Bernard Cazeneuve said he was putting in place a "powerful and durable" system of protection for France's Jewish community, the largest in Europe.

Muslims are also coming under attack, with community leaders reporting more than 50 incidents recorded since the assault on Charlie Hebdo, including apparent arson at a mosque in Poitiers on Sunday.

In German cities on Monday, about 100,000 people demonstrated in support of the country's strongly held multicultural values and against an anti-Islamic movement that is gathering pace across an increasingly immigration-sceptic Europe.

At the same time, a record 25,000 people joined an anti-Islamic PEGIDA march in the eastern city of Dresden, claiming their stance was vindicated by last week's Paris jihadist attacks.

Chancellor Angela Merkel was set to attend a rally backing an "open and tolerant Germany" on Tuesday in Berlin, alongside the foreign minister and other top officials.

As well as Coulibaly, brothers Said and Cherif Kouachi, who carried out the Charlie Hebdo murders, were known to French intelligence for their extremist leanings.

Valls admitted there were "clear failings" after it emerged that the Kouachis had been on a US terror watch list "for years".

He told French radio on Monday he wanted to see an "improved" system of tapping phones.

Valls also said 1,400 people were known to have left to fight in Syria and Iraq, or were planning to do so, up from the 1,200 stated last month. Seventy French citizens have died there.

Said Kouachi, 34, was known to have travelled to Yemen in 2011, where he received weapons training from Al-Qaeda in the Arabian Peninsula. And 32-year-old Cherif was a known jihadist convicted in 2008 for involvement in a network sending fighters from France to Iraq.