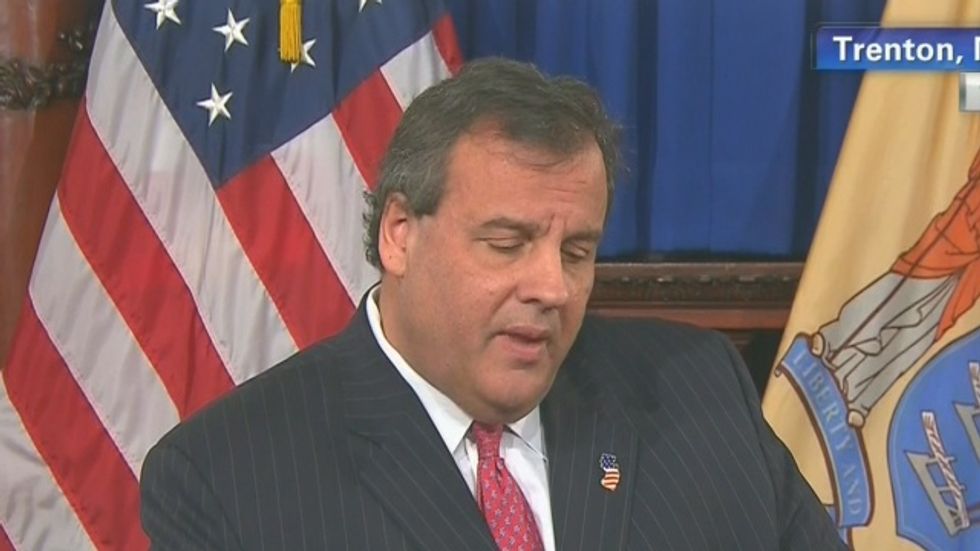 NEW YORK (Reuters) - New Jersey Governor Chris Christie, under pressure to decide whether to seek the Republican nomination for president in 2016, has a chance next week to reset his governorship after being stymied all year by national controversies and home-grown fiscal crises.

On Tuesday, Christie will deliver his state of the state address, potentially the biggest speech he'll make before announcing his presidential intentions, a decision that could come by the end of the month.

After a difficult year, Christie may "try to regain some momentum and frame his tenure, both for the New Jersey audience as well as the national audience," said Ben Dworkin, who heads a New Jersey politics institute at Rider University.

Christie has been hounded by the so-called Bridgegate scandal and related ongoing federal criminal probes, as well as controversy over whether he should have gone to Texas for a Jan. 4 Dallas Cowboys game, the trip paid for by team owner Jerry Jones.

The Cowboys are part owner of a company that does business with the Port Authority of New York and New Jersey, the transportation agency Christie's former aides are accused of abusing in order to engineer a traffic jam on the George Washington Bridge as an alleged act of political retribution against a local mayor.

The bridge scandal "effectively made 2014 a giant missed opportunity" for Christie, said Dworkin.

"Christie has cultivated an image of being the atypical politician," Dworkin said. "He is a reformer, he is able to get things done with Democrats but still be a strong conservative. He doesn’t look like or sound like anybody else out there.

"What issues like Bridgegate and the Jerry Jones gifts provide is an opportunity for Christie's opponents to paint him as the opposite, as a very typical politician.”

Polls have consistently shown former Florida Governor Jeb Bush ahead of Christie in a potential Republican presidential primary. Voters would also elect Democrat Hillary Clinton over Christie in the general election, according to the most recent polls.

Christie is likely to use his state address to recite his accomplishments last year, such as rebuilding after Hurricane Sandy.

His constituents may also listen to hear his plans on how to improve an underfunded pension system, a transportation funding crisis, sluggish economic growth and the fiscal meltdown of Atlantic City, the once-strong East Coast gambling hub.

New Jersey has recovered only about half of the jobs it lost during the recession, compared to well over 100 percent nationally and nearly 200 percent for neighboring New York. Matters got worse on Tuesday, when Mercedes-Benz announced that it would move its U.S. headquarters from northern New Jersey to Atlanta, affecting about 1,000 jobs.

That loss comes after a year that saw roughly 8,000 jobs vanish with the closing of four casinos in Atlantic City, an economic engine of southern New Jersey.

Also pressuring Christie will be the decision he made amid a revenue crisis last year to cancel nearly $2.5 billion of contributions to the state's already underfunded retirement system for public employees. New accounting methods in November showed the system funded at just 44 percent.

In last year's state of the state, Christie said bipartisan pension changes he won in 2011 didn't go far enough, setting the stage for his call a month later in his budget address for additional reforms. Yet even now, he hasn't detailed or endorsed any specific new proposals, like moving employees to a 401(k)-style plan, for example.

Christie formed a pension study commission last year, but so far it has produced one report without specific recommendations. Commission Chairman Thomas Healey did not return a call seeking comment.

Competing for attention, and money, is the state's nearly insolvent transportation fund. Currently, all of the gasoline taxes collected in New Jersey goes to pay existing debt service costs instead of funding new projects. The fund, which has nearly gone broke several times, will run out of money on July 1 unless lawmakers find additional funding.

One quick fix would be to raise the gas tax. At 14.5 cents a gallon, New Jersey's tax hasn't been raised since the late 1980s, making it one of the only low-tax bright spots for residents of a high-tax state. Long-term, raising the gas tax alone likely won't be enough to fix the problem.

"We're at a turning point," said Gordon MacInnes, president of the left-leaning think tank New Jersey Policy Perspective. "Our greatest economic asset, which is our location, is under threat because the [fund] that pays for modernizing, expanding and rehabilitating our transportation networks goes broke."