Cop who Tasered 76-year-old man during traffic stop wants job back: did 'nothing unreasonable' 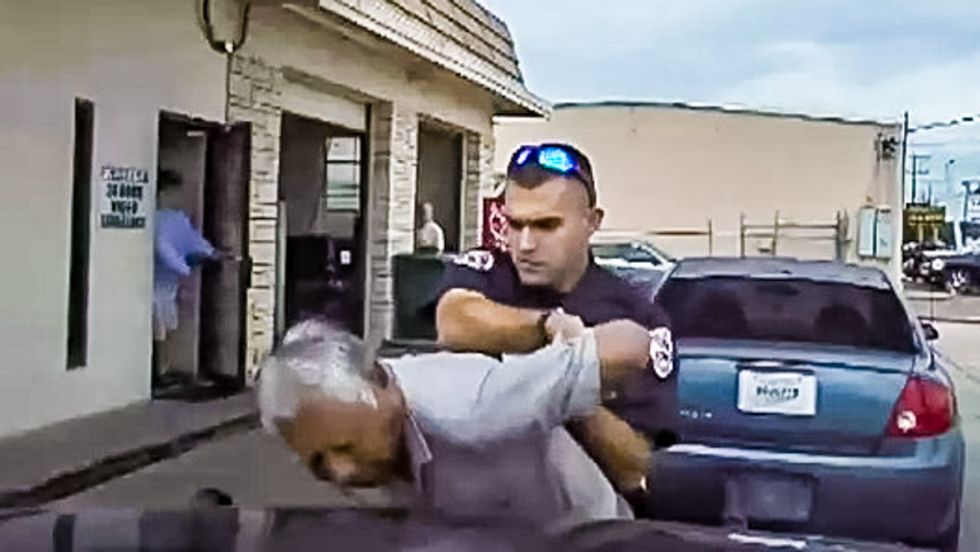 A Texas police officer who was fired after Tasering a 76-year-old man during a routine traffic stop is suing to get his job back, with his attorney saying "There's nothing unreasonable at all about that level of force," used during the incident, reports the Victoria Advocate.

Victoria police officer Nathanial Robinson was fired on Monday after an internal investigation found that he violated three department policies - conduct and performance, use of force, and arrest without warrant - during the Dec. 11 traffic stop.

The incident, captured by a dash-cam, showed Robinson slamming 76-year-old Pete Vasquez onto the hood of a patrol car before placing Vasquez in a hold and then forcing him to the ground where he used his Taser on the elderly man twice.

Vasquez was driving a work-owned vehicle back to his place of business when Robinson pulled him over for an expired inspection sticker.

After explaining that the car belonged to a car lot, and that the dealer tags made it exempt from having an inspection, Robinson grabbed Vasquez and attempted to arrest him.

“I told the officer, ‘What in the hell are you doing?’ This gentleman is 76 years old,” Urich said. “The cop told me to stand back, but I didn’t shut up. I told him he was a goddamned Nazi Stormtrooper.”

According to Greg Cagle -- a Texas Municipal Police Association lawyer hired to defend Robinson -- the 23-year-old cop did nothing wrong.

"I thought it was important for people to know he didn't do anything that was a violation of policy or law," Cagle said. "There may be some issues of law we need to talk about, and tactics that I don't think were considered."

According to Cagle, Vasquez kicked the officer while they were on the ground, saying the Vasquez's resistance was the reason for Robinson using the Taser.

"There's nothing unreasonable at all about that level of force," Cagle said. Vasquez "wasn't injured. He scratched his elbow and hurt his feelings, but those aren't injuries in the constitutional sense."

Following the altercation, Vasquez was taken to a local medical center and released without charges ever being filed.

Video of the arrest can be seen below:

With Hurricane Ian bearing down on Florida, it's completely understandable why the House committee investigating the January 6 insurrection postponed Wednesday's scheduled hearing. No new date has been scheduled, though it will be coming soon and is likely to be another doozy of a hearing. As Heather "Digby" Parton, notes, the word is that the committee will focus heavily on the role of long-time Donald Trump confidante Roger Stone, and the role he played in planning and executing the Capitol riot.

But even without the January 6 hearing to provoke Trump's ravings on social media, Trump has a lot of legal problems to sweat this week. That's because jury selection began for the trial of Oath Keepers head Stewart Rhodes and four other members of his far-right militia. The Oath Keepers, as with the Proud Boys, are both heavily linked to Stone and both were central to the Capitol insurrection.