Dating advice from Fox News gets even more obnoxious 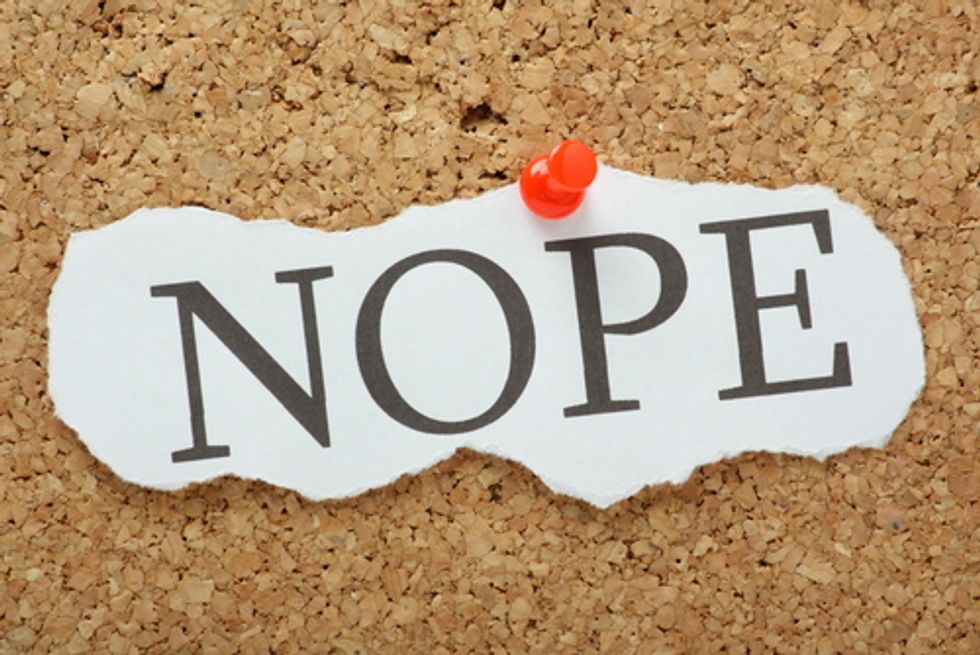 Fox News continues its march right past being conservative on gender issues and towards being overtly and grotesquely misogynist. As David Edwards at Raw Story reported, the show Fox & Friends did a New Year's Day bit praising one of those sexist dating guides that promises women they'll be able to "catch" a man while simultaneously and unintentionally arguing that men are wretched creatures that no woman should ever mess with. (To be clear, I disagree. There are plenty of men who don't need a woman to debase herself by acting like an unpaid servant in order to "earn" love, but these kinds of dating guides always assume men are such weak monsters that this is the only way to get one to like you.) The book is called Single Man, Married Man and it purports to be a guide to how to mold yourself to be what men really want. And apparently what men really want is a doorma, though one who pretends that waiting on you hand and foot and never standing up for yourself is a form of "strength".

Even co-host Peter Doocy seemed to be perplexed as he offered the first piece of advice: “No matter where a woman was in life, she should always be able to cater to her man’s needs.”

“Yeah, I do want to be a better wife,” co-host Ainsley Earhardt agreed.

“Well, how about this one?” Doocy continued. “When he gets his ego stroked, he’ll be more inclined to love you more.”

Doocy said that one way a woman could stroke a man’s ego would be to “prepare his meals, draw him a bath and massage his feet every now and then.”

“All in for foot massages,” Doocy added.

“We had a lady on earlier saying, give to give,” Earhardt explained. “And that’s the thing you have to remember. You’re giving to your husband because you want to, not because you’re expecting something in return.”

“My wife does cook, and she does give me foot massages,” Morris bragged.

But I looked at this summary of the book at DNAinfo and, if anything, it may be even worse than they were portraying it, because it portrays men as beings who are fundamentally incapable of caring about women as anything more than ego-fluffing meal cookers who have sex with you. There are "jokes" about how women are so beneath consideration that men you barely know matter more than your wife does:

I saw a joke that said, 'A man can cheat on his woman and sleep like a baby in the same bed next to her, but will feel bad about getting a haircut from someone other than his regular barber,' which I found to be hilariously funny and true.

It’s risky for men to be straightforward with women because the truth doesn’t always yield the results we are intending, and when we are being direct with our women, our messages can sometimes go in one ear and out the other. So lies are perpetuated to get our women to listen to us.

To be clear, I don't think a relationship is, to quote Dan Savage, a deposition. You are not required to share everything you think or do with your partner. Privacy within relationships can help keep the spark alive. But he's clearly not talking about privacy, but about lying to someone in order to manipulate them, which is a much different beast, and can quickly become abusive in the form of gas-lighting.

There's a justification for a man's unwillingness to listen to women, particularly if there's a disagreement:

It’s not in most men’s nature to argue. If your man doesn’t want to argue with you, this does not mean that he’s weak. It possibly alludes to the exact opposite, that he possesses an inner strength to make the intelligent decision to exit the situation.

You can call it "inner strength", but I call it bullshit. "I refuse to argue" is frequently a version of "it's my way or the highway", which is clearly what is going on here.

Then there's the inevitable portrayal of the choice to be a doormat as if it were "strong":

Putting up with someone who doesn't respect you enough to listen to you isn't strength and people who say otherwise are trying to manipulate you.

And here's the advice that got the Fox anchors all excited:

"Cater 2 U' [by Destiny's Child] should be on every woman’s playlist and kept on repeat… They knew that no matter where a woman was in life, she should always be able to cater to her man’s needs — prepare his meals, draw him a bath and massage his feet every now and then.