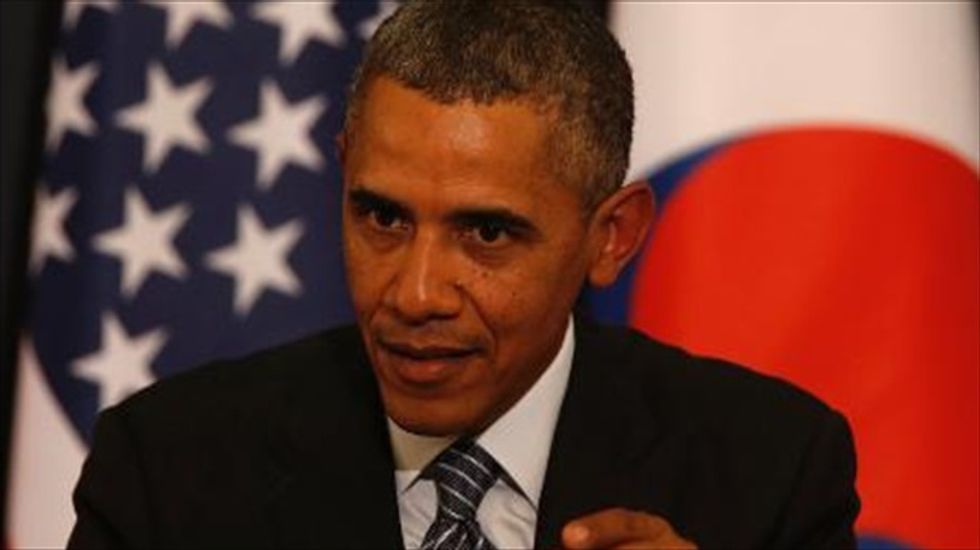 US President Barack Obama answers a question during a joint press conference with South Korean counterpart Geun-hye Park in Seoul, on April 25, 2014 [AFP]

Barack Obama enters the final two years of his presidency with a blemish on his legacy that looks impossible to erase: the decline of the middle class he has promised to rescue.

The revival of middle-class jobs has been one of Obama's mantras since he took office in 2009 fighting the worst economic crisis in generations. It was a major theme of his last State of the Union address and is expected to feature in the one scheduled for Tuesday.

Obama's administration can take credit for stabilizing the U.S. economy, which is growing again and last year added jobs at the fastest clip since 1999.

But for the middle class the scars of the recession still run deep. Federal Reserve survey data show families in the middle fifth of the income scale now earn less and their net worth is lower than when Obama took office.

In the six years through 2013, over the recession and recovery that have spanned Obama's tenure, jobs have been added at the top and bottom of the wage scale, a Reuters analysis of labor statistics shows. In the middle, the economy has shed positions - whether in traditional trades like machining or electrical work, white-collar jobs in human resources, or technical ones like computer operators.

The trend is in plain sight in Dalton, Georgia, a manufacturing hub 90 miles north of Atlanta. Massive factories that made it "the carpet capital of the world," were slammed by the collapse of the housing bubble. During the recession, with machines idle, they began investing heavily in new technology and are now laying plans to restore some lost jobs.

But the new positions are more skewed to the high and low end, and there will be fewer of them per dollar of output than before the recession, said Brian Anderson, president of the Greater Dalton Chamber of Commerce.

"We can produce a whole lot of new carpet with not a lot more people," Anderson said. Companies have spent between $1.5 and $2 billion on retooling and innovation, reducing demand for labor, while higher than average regional unemployment continued to hold down wages, he said.

Firms like flooring giant Shaw Industries pared jobs - dropping 5,000 from a pre-recession labor force of 28,000 - but with new technology have rebuilt revenue to near previous levels. The company is boosting wages for master mechanics to around $30 an hour, but feels no pressure to increase wages for the unskilled positions it retains.

The heavy investment in robotics and mechanization has raised expectations, said Paul Richard, Shaw's vice president of human resources. "It has put more emphasis on associates that can bring technical skills."

Ahead of Obama's annual address, the business community is expecting the president to press for passage of the Trans-Pacific trade treaty, though a debate rages within the Democratic Party over whether that would create more middle class jobs than would be lost to increased imports.

Obama has proposed expanded access to community college education and improved family leave policies, while some of his allies have called for an outright wealth transfer from the top to the middle.

For Obama's legacy none of that may matter.

The forces at work in the American economy appear so entrenched that Obama may be remembered as the president who pulled the nation from its worst downturn since the Great Depression, but failed to arrest deepening economic inequality.

The Federal Reserve, under Obama appointee Janet Yellen, has put money in almost all Americans' pockets with near zero interest rates that have held down mortgage payments, allowed companies to reinvest, and boosted job creation.

But the Fed's Survey of Consumer Finances shows how uneven the distribution of that stimulus has been. Between 2010 and 2013, as recovery took hold and stock markets soared, the average net worth of families in the top 40 percent of income earners grew. For all others average net worth shrank, declining 19 percent for the middle fifth.

Similarly, the average earnings for families in the top 10 percent grew more than 9 percent from 2010 through 2013, while those at other levels stagnated or shrank. For the middle fifth, average earnings fell 4.6 percent.

Obama "had a good start in ending the recession and a good start to recovery and then we were knocked off that trajectory," said Josh Bivens, an economist with the Economic Policy Institute, a left-leaning think tank that advocates higher minimum wages and other policies to boost incomes.

Bivens blamed the end of stimulus programs and a standoff in Congress over the federal debt ceiling that curbed government spending for the loss of initial momentum.

To a degree the administration has also been a captive of broad technological and global trends. Automation and the offshoring of manufacturing and service jobs continue to transform industries and communities such as Dalton.

Obama's changing rhetoric over time appears, increasingly, to acknowledge the magnitude of the challenge.

In 2011, he called the erosion of middle class jobs a "Sputnik moment" that should energize the country to out-produce and out-innovate the rest of the world. By last year, the tone was more tempered: "The cold, hard fact is that even in the midst of recovery, too many Americans are working more than ever just to get by – let alone get ahead. And too many still aren’t working at all," Obama said in last year's State of the Union address "Our job is to reverse these trends. It won’t happen right away."