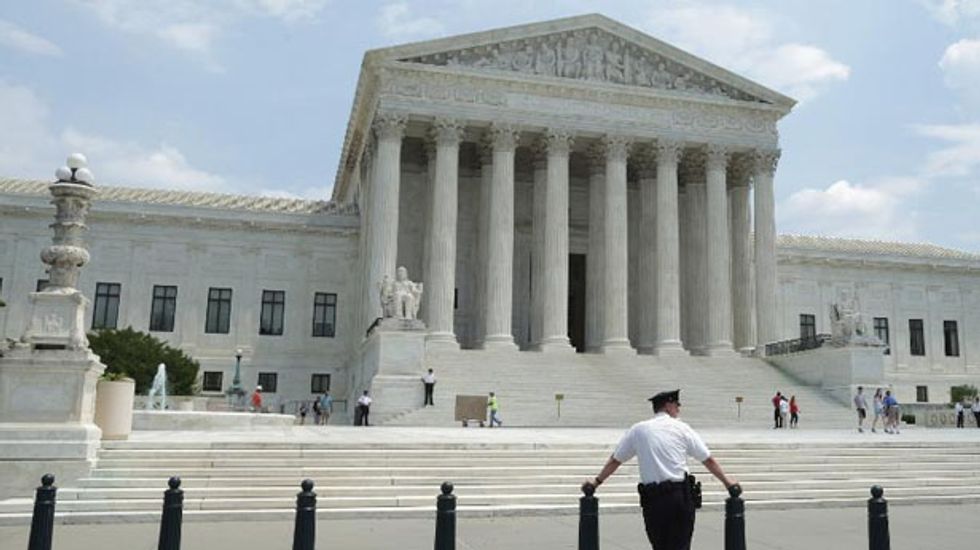 Several demonstrators disrupted the start of business at the U.S. Supreme Court on Wednesday on the fifth anniversary of the court's contentious ruling that lifted limits on corporate spending in federal election campaigns.

The usually tranquil Supreme Court chambers were jarred when one person stood up and denounced the 2010 Citizens United v. Federal Election Commission ruling just as the justices prepared to begin issuing decisions on cases argued earlier in the term.

As police were taking that person out of the chamber after wrestling the demonstrator to the ground, another protester started shouting "one person one vote" amid the clamor of chairs being knocked over. Another demonstrator began shouting about "the 99 percent," a reference to the majority of Americans as opposed to the richest 1 percent of the population.

The commotion lasted about a couple of minutes before police removed several protesters and the court got back to business, issuing rulings and hearing oral arguments in a closely watched housing discrimination case.

It was not the first disruption in the court chambers over the 2010 ruling. A Los Angeles man in February 2014 interrupted proceedings in a patent case by shouting slogans like "Money is not speech," "Corporations are not people" and "Overturn Citizens United."

The court's 5-4 decision in the Citizens United case dismantled restrictions on independent corporate and union expenditures in federal elections.

Critics argue that the ruling opened the floodgates for money from corporations and undisclosed donors to flow into American politics and further boosted the influence of the wealthy in the electoral process.

Since the Citizens United ruling, there has been an escalation in such spending in U.S. presidential and congressional elections.

The high court was sharply divided in the 2010 ruling. The conservative justices in the majority emphasized the free speech rights of corporations under the U.S. Constitution and found that the government had no right to regulate political speech. The court's liberals warned that such unfettered campaign spending would have a corrosive effect on democracy.

Outbursts in the Supreme Court are rare. The most high-profile incident took place in 1983, when Hustler magazine publisher Larry Flynt was ejected from the court for shouting obscenities at the justices during oral arguments in a libel case.