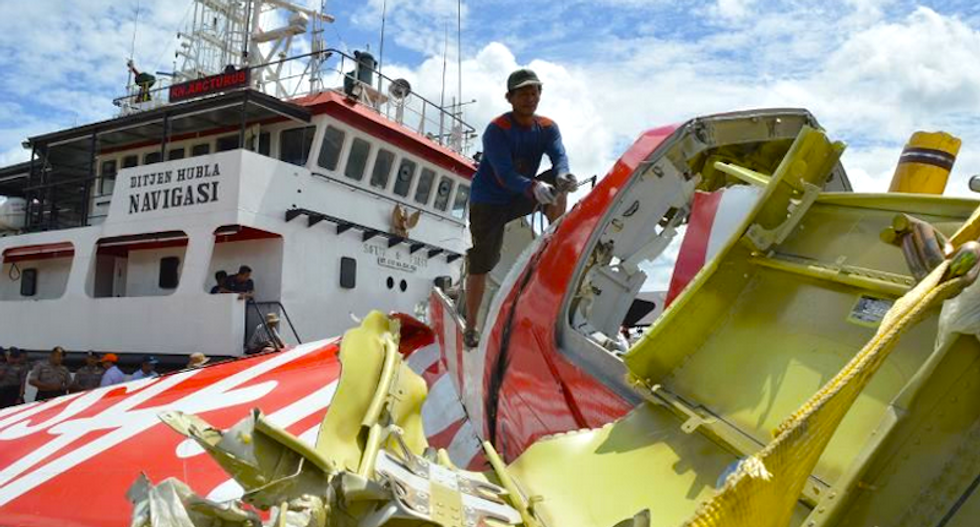 An Indonesian worker (top C) cuts the tail of the AirAsia flight QZ8501 in Kumai on January 12, 2015, after debris from the crash was retrieved from the Java sea (AFP)

Indonesian divers on Tuesday retrieved the cockpit voice recorder from beneath the wreckage of an AirAsia plane that crashed into the Java Sea as the airline's boss vowed to overcome the "toughest times" he has known.

It came a day after the plane's other black box, the flight data recorder, was recovered. The devices should give investigators vital information about what caused the accident.

Flight QZ8501 went down on Dec. 28 in stormy weather as it flew from the Indonesian city of Surabaya to Singapore with 162 people on board.

Just 48 bodies have so far been recovered, with many believed to be in the main section of the fuselage, which has not yet been found.

Indonesia's meteorological agency has said bad weather likely caused the Airbus A320-200 to crash but a definitive answer is impossible without the data recorders.

Rescuers have faced a lengthy, difficult search often hampered by bad weather but a breakthrough came at the weekend when they finally detected "ping" signals from the black boxes.

On Tuesday divers lifted the second black box to the surface and took it to the navy warship Banda Aceh, said Santoso Sayogo, an investigator from the National Transport Safety Committee.

"The CVR (cockpit voice recorder) has been lifted from the water and is in the ship," he told AFP, adding it would be flown to Jakarta later Tuesday.

The device had been about 32 metres (105 feet) under water, beneath a wing.

It was not far from the first black box but took longer to retrieve as it was trapped under heavy wreckage.

The flight data recorder monitors information such as airspeed, while the cockpit voice recorder stores radio transmissions and sounds in the cockpit.

Both are located near the rear of the plane and designed to survive underwater.

The accident is the first major setback for Malaysia-based AirAsia, which has enjoyed a 13-year run of success.

In a message to customers, flamboyant boss Tony Fernandes said that "the past few weeks have been the most difficult weeks of my life since starting AirAsia."

But he pledged to get through the crisis: "Even in our toughest times, we will continue to be the world's best and be better for you."

In another positive development for the investigation, divers on Tuesday spotted one of the aircraft's engines, which has a control unit that records data about performance, said Nurcahyo Utomo, from the transport committee.

"If something is wrong with the engine, or weird, it will be recorded," he said.

Authorities now say the focus is on finding the main body of the aircraft, although Utomo said he believed it had broken into pieces.

Officials have said the rapid change in pressure as the plane fell into the sea may have caused it to "explode" on impact with the water.

The flight data recorder, which officials have said is in good condition, was flown to Jakarta on Monday night.

The transport committee said the boxes would undergo a lengthy analysis in the capital after the data is downloaded, which would take about a week.

French experts from Airbus were in Jakarta to help with the analysis, and experts from other countries whose citizens were involved in the crash would also assist.

The committee has said a preliminary report on the accident will be produced within a month, and a final report after a year.

The tail of the plane, with its red AirAsia logo, was lifted out of the water on Saturday using giant balloons and a crane. It was brought by tugboat on Sunday to a port near Pangkalan Bun on Borneo island, the search headquarters.

All but seven of those on board the flight were Indonesian.

The bodies of a South Korean couple were identified at the weekend, but their 11-month-old baby remains unaccounted for.

The other foreigners were one Singaporean, one Malaysian, one Briton and a Frenchman -- co-pilot Remi Plesel. Their bodies have not been recovered.

While the cause of the crash is unknown, the disaster has once again placed Indonesia's chaotic aviation industry under scrutiny.