Eric Holder in Paris: US is at war with 'lone wolf' terrorists 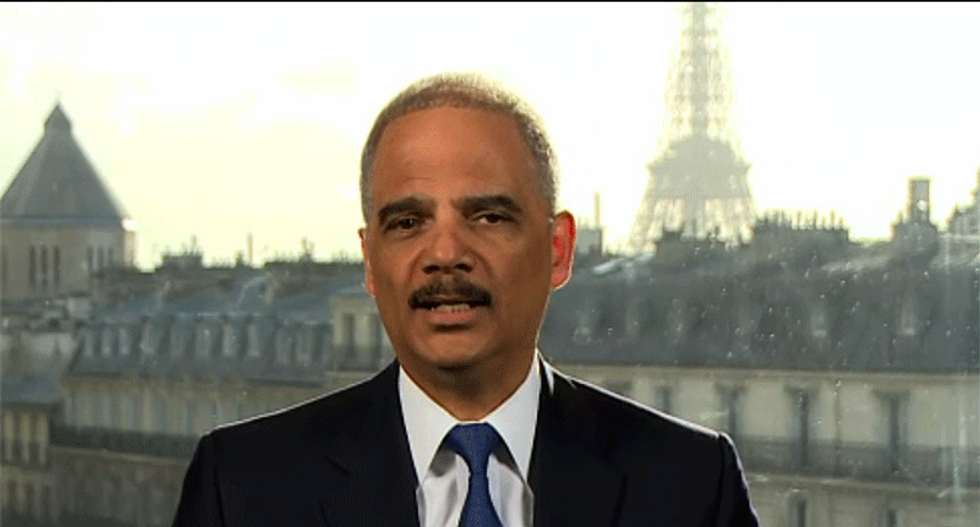 Eric Holder echoes sentiment that extremists ‘corrupt the Islamic faith’ to justify violence. US plans conference on anti-extremism on 18 February

As a million people gathered in Paris to march and express solidarity in the face of Islamist terror attacks that this week killed 17 people, attorney general Eric Holder said the US was “at war” with “lone wolf” terrorists.

Holder’s comments echoed those of the French prime minister, Manuel Valls, who said on Saturday his country was at war with radical Islam . “It is a war against terrorism,” Valls said, “against jihadism, against radical Islam, against everything that is aimed at breaking fraternity, freedom, solidarity.”

Speaking to NBC from Paris, where he was attending a counter-terrorism summit and the march, Holder said: “That is the thing that I think keeps me up most at night, this concern about the lone wolf who goes undetected.” Questioned by CNN about how the Paris attackers were known to authorities but still managed to act, he said such people “float under the radar screens”.

“I certainly think we are at war with those who would commit terrorist attacks and corrupt the Islamic faith to try to justify their terrorist actions,” he told ABC during a tour of Sunday talk shows as he led the Obama administration’s response to the attacks. “That’s who we are at war with and we are determined to take the fight to them.”

The White House said on Sunday it will host a conference on anti-extremism on 18 February. Holder said: “We will bring together all of our allies to discuss ways in which we can counteract this violent extremism that exists around the world.”

Speaking to CNN, Holder said: “We’re horrified by what happened and we express our condolences to the French people. What we saw in France over the course of this last week is unfortunately what we’re going to have to confront into the future.

On Sunday, a firebomb was thrown at the offices of a German newspaper which republished cartoons from Charlie Hebdo, the French satirical magazine at whose offices 12 people were killed this week. Two men were detained.

Holder deflected questions about the possible existence of “sleeper cells” of terrorists in the US, which the Senate intelligence committee member Dianne Feinstein earlier said existed “in France and in other countries and yes, even in our own”. He also refused to comment on alleged failures by French intelligence services which could have stopped the Paris attacks.

Asked if he believed the Yemen-based Al-Qaida in the Arabian Peninsula (AQAP) had “ordered, co-ordinated and paid for” the Paris attacks, the group having been linked to one of the attackers on Charlie Hebdo , Holder said: “We don’t have any credible information at least as yet to indicate who was responsible, who sponsored this act.

“I will say this: AQAP remains the most dangerous of the al-Qaida cells that we are constantly focused on.”

Responsibility for the Paris attacks is not yet clear. On Sunday, a video was released in which Amedy Coulibaly, who shot dead a policewoman and four hostages in apparent co-ordination with the Charlie Hebdo attackers, before being shot dead by French police, is described as a “soldier of the caliphate”. Coulibaly appears to swear allegiance to Abu Bakr al-Baghdadi, the leader of the Islamic State militants who have taken control of large parts of Iraq and Syria and against whom US-led air strikes continue.

The British prime minister, David Cameron, is due in Washington on Thursday for a two-day meeting with President Barack Obama. The Paris attack will be among the subjects discussed. Cameron, the German chancellor Angela Merkel and many other world leaders marched in Paris on Sunday.

Speaking to ABC on Sunday, the French ambassador to the US, Gérard Araud, said the White House conference was a good idea because “in a sense, France was not attacked as France. France was attacked as a western democracy, and it could have happened everywhere in Europe, and, unfortunately, I guess, also in the US.”

Watch video from Eric Holder's interview on ABC's This Week below: