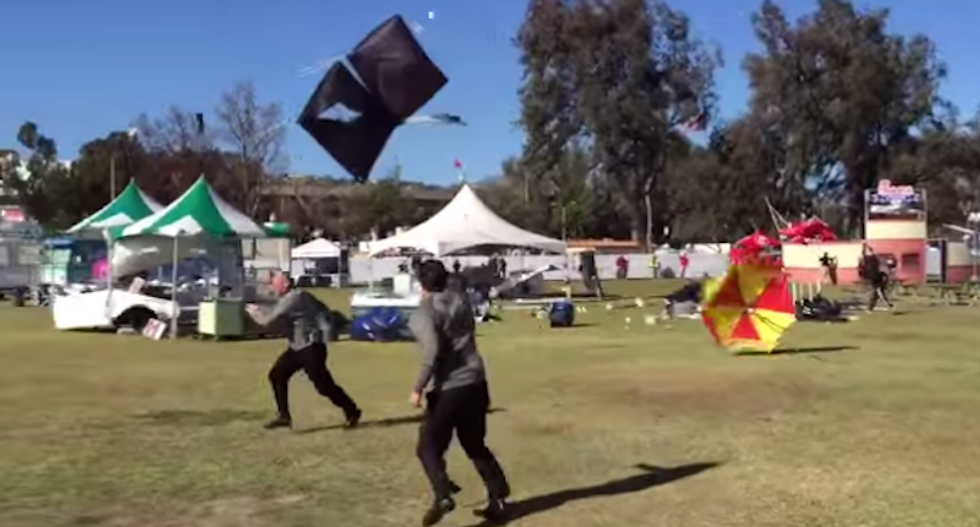 A freak funnel of wind struck a concession area outside the Rose Bowl stadium in Pasadena during a pregame event on Wednesday, tossing tents and canopies through the air and slightly injuring four people, a fire department official said.

The burst of wind, which a National Weather Service specialist called a "cold dust devil," was caught in a video clip posted on YouTube showing vendors and bystanders, including a person dressed in a cow costume, yelling and running for cover.

Four vendors, three men and a woman, were treated by emergency personnel at the scene for bumps and bruises and one drove himself to the hospital afterward, but none of the injuries was serious, Pasadena Fire Department spokeswoman Lisa Derderian said.

The mid-afternoon mishap occurred about an hour before closing time for the New Year's Eve event outside the stadium, where Oregon and Florida State are due to meet on Thursday in the Rose Bowl college football playoff semifinal. Authorities shut down the pregame festival early as a precaution, Derderian said.

The dust devil, a phenomenon caused by streams of wind that can form a swirling pattern when they encounter a large obstruction -- in this case, the stadium -- came during gusty weather that began buffeting Southern California late on Tuesday as unusually cool temperatures gripped the region.

The NWS warned thousands of people who began camping out late on Wednesday in Pasadena's Old Town along the route of the annual New Year's Day Tournament of Roses Parade to brace for a record freeze.

The temperature was expected to fall to 32 degrees F before sunrise on Thursday, tying a record low set in 1952. But the flower-petal-covered floats featured in the parade were not expected to be harmed by the cold snap.

Forecasters said the mercury should rise well into the 40s within an hour of the launch of the parade, which will be viewed by some 700,000 spectators along the 5-1/2-mile route of the procession and millions more on television, organizers said.

Watch video from the incident posted online by adsport: