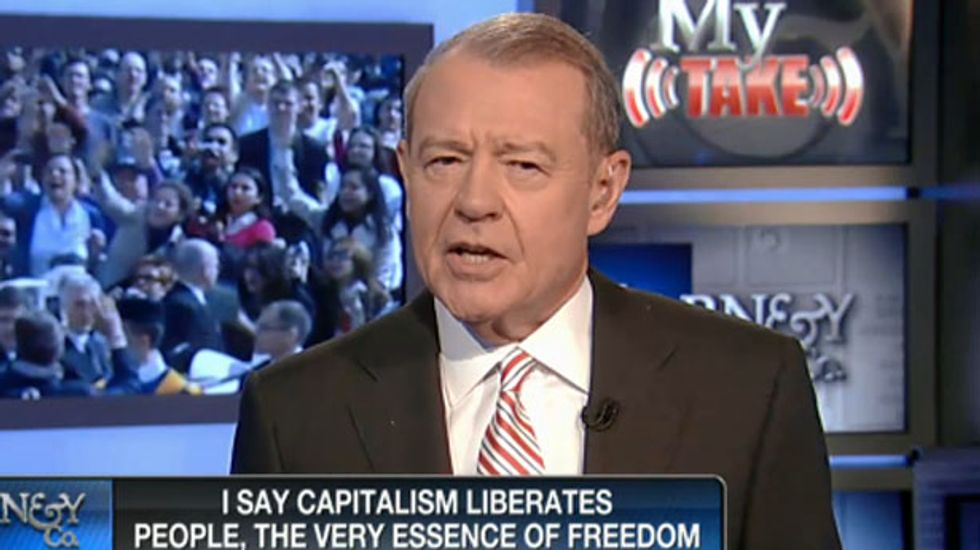 Responding to a push from the Obama White House encouraging the passing of measures guaranteeing workers one week of paid sick leave each year, a Fox Business News host called the proposal a "giveaway," reports Media Matters for America.

Appearing on America's Newsroom, Fox Business Network host Stuart Varney told Martha MacCallum, "This is all about politics. The president is lining up all of these giveaways, which he knows will not get through Congress. He knows the Republicans will say 'No, we're not going to do that.' He knows that will make them look bad. He looks good. He wins politically, even though he doesn't get the measures that he actually wanted."

In a speech on Thursday, President Barack Obama urged Congress, states, and cities to pass legislation providing workers up to a week of paid sick time per year. The president also said he would ask for more than $2 billion for states to create paid family and medical leave programs.

"Forty-three million Americans do not get paid sick leave. It's a pretty astonishing statistic." Obama said on Thursday, before adding, "The good news is that we can really do something about it."

Despite the president calling upon Congress and businesses to take action,  MacCallum introduced the segment saying, "How about this: President Obama taking new executive action and the cost could be coming out of your pocket," implying that the President was signing an executive order mandating the change with taxpayers bearing the burden.

"In the case of the extra one week of guaranteed sick leave for all workers, that will be paid by the employer," Varney explained to MacCallum.

"So they're going to enforce this on private companies? That they have to give a week's worth of paid sick days,"  MacCallum asked, before peppering a laughing Varney with more questions.

According to the Washington Post, a study last year of Connecticut's expanded paid sick leave law showed that employers saw little impact on their overall expenses, with 15 percent reporting increased productivity and 30 percent seeing a notable improvement in employee morale. A year and a half after the law went into effect, more than three quarters of employers were supportive of it.

Watch the video below Media Matters of America: