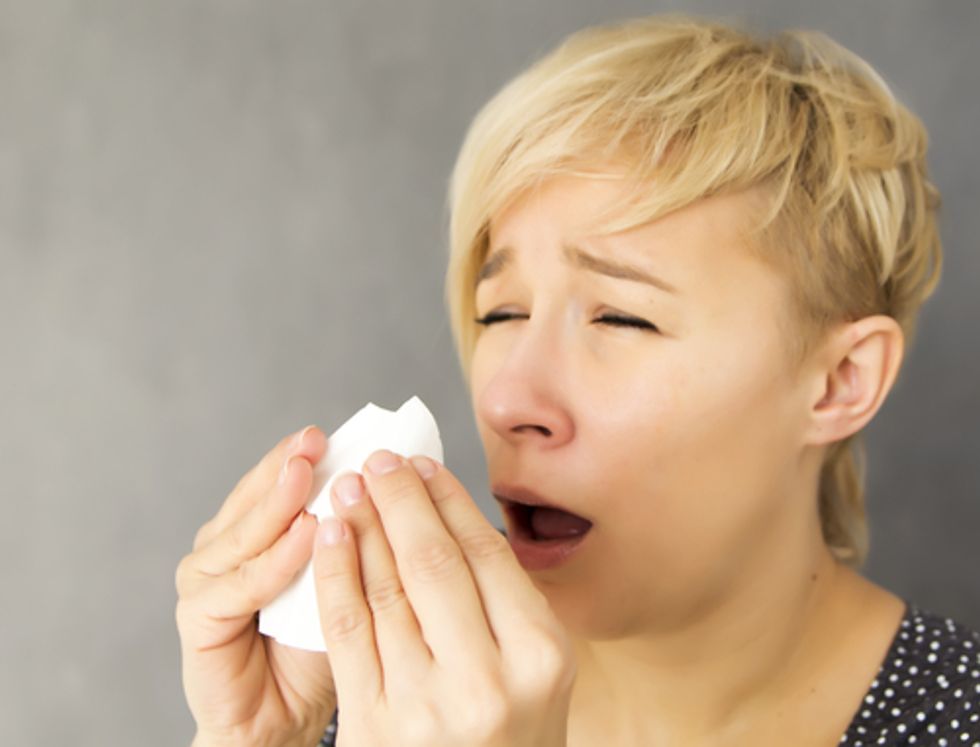 Sure, I'll make that sandwich for you. Coming right up!

Fox News wants sick people to sneeze in your food. That's the only conclusion I can draw after watching this clip, caught by Raw Story's Tom Boggioni and Media Matters, of Stuart Varney and Martha MacCallum pitching a fit over President Obama's announcement that the White House plans to push for expanded worker rights to parental leave and sick leave. The plan is a complex one, involving memos about federal workers and a bill  to expand parental leave and ensure that every American worker gets seven paid sick days a year. While it's not even remotely surprising that conservatives are going to gripe about the parental leave---many of them somehow both endorse compulsory motherhood while simultaneously telling women they shouldn't have kids unless they can afford to quit their jobs to raise them---but pitching a fit over sick days shocked even me. But here they are:

"This is all about politics. The president is lining up all of these giveaways, which he knows will not get through Congress. He knows the Republicans will say ‘No, we’re not going to do that.’ He knows that will make them look bad," Varney gripes. Sorry, Varney, but the reason Republicans look bad is not because Obama makes them look bad. They look bad because they oppose common sense regulations to keep sick people from going to work. If anything, Obama is offering them a chance at redemption. They can pass his bill and give everyone paid sick leave, after all. That they refuse to do so is on them, not on him.

Oh, and love the idea that having sick time is a "giveaway". Uh, no. People earn that sick time by working. I bet you a billion dollars Stuart Varney has sick time in his contract. Conservatives are inching ever closer to arguing that your fucking salary is "welfare". And by "your", I mean your. They think they work for their money but that other people get their paychecks for farting in the wind.

I cannot reiterate this enough. It would be nice if everyone supported universal sick days because we're decent people instead of empathy-free monsters, but I'm long past pinning my hopes on this. But even Selfish-Americans should support mandatory sick days. "As The Washington Post's Wonkblog pointed out, low-income workers are four times less likely to get paid sick leave than the top 10 percent of private sector wage earners," writes Rachel Calvert at Media Matters. Low income workers often work in the food industry, you brain dead morons. Because they don't get sick days, they have to come in to work. Where they are working with food. Food you eat.

In case this isn't registering, here's some fun examples! This Subway worker alleges that she was forced to work even though she was vomiting from a stomach bug. She even threw up on her shirt, but her boss just told her to change shirts. Eventually, an ambulance had to be called. Here's a Facebook post from someone who saw it all go down:

Jezebel collected some horror stories from restaurant workers about how a lack of sick days means they are showing up and breathing their gross germs all over your food:

Almost the exact thing happened to me. I was working at a cheap sushi restaurant and got food poisoning in the middle of my shift. I began vomiting over and over, about twice an hour. I was literally running in and out of the bathroom between taking orders because I couldn't stop, I was so ill. What did my manager say when I asked if I could go home? He said no, we were short staffed because he'd already let a girl go home because she'd stayed up too late the night before doing cocaine. It took 4 hours from the point I started vomiting for him to finally let me leave, and he demanded I apologize to all my coworkers for "making them work harder". Btw I didn't even make it the 6 block walk home without vomiting in the gutter. I didn't get fired right away, but I mysteriously stopped getting shifts about two weeks later despite being the oldest and most experienced server (at 20 years old, btw). Fuck the way restaurant workers are treated in this country.

I was once incredibly ill at my place of employment (I was 19 at the time). I'd been vomiting off and on and only keeping down yellow Powerade. I requested to go home and was not allowed. At one point I had to run to the bathroom to use the toilet (both ends were going at this point). While I was on the toilet, I felt the urge to vomit. Not being able to hold it down, I sprayed yellow Powerade all over the bathroom stall through my fingers. At that point, I just said "deuces" and left. Turns out I had a severe case of mono and had to be hospitalized for a week. The next day my mom tried to call them and let them know that I wouldn't be in since I was hospitalized. They told her I needed to call myself. She told them to get fucked.

There are so many like this. Granted, a lot of the time it's evil bosses who won't let you go home that are the problem, but mandatory sick days can help shake them out of that mentality somewhat. But it also makes it easier for a sick person to stay home. Will some people use it to nurse hangovers or skip work? Sure, but we're only talking 7 days a year, so it's not like it's going to ruin you. The small amount of slacking is more than made up for by the fact that we will have a lot fewer sick people sneezing into our food. Just consider that.