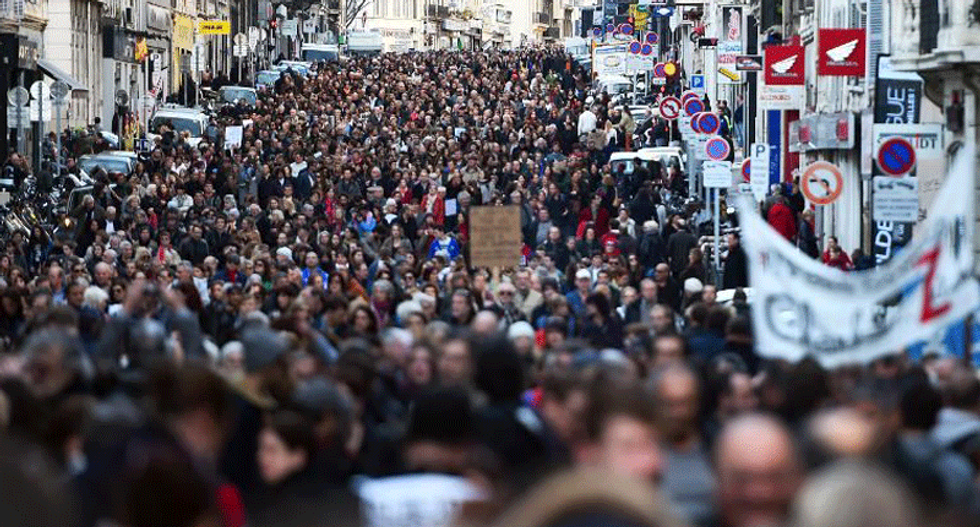 People march in the southeastern city of Marseille, on January 10, 2015 (AFP)

Hundreds of thousands of people defiantly rallied throughout France Saturday in solidarity with victims of this week's Islamist attacks, while the wanted girlfriend of one of the gunmen was said to have left the country.

The massive rallies came on the eve of a historic march set for Paris in tribute to the 17 victims of the three-day killing spree, and security forces were mapping out a major deployment aimed at preventing fresh violence.

Security levels were kept at France's highest level, with the girlfriend of one of three gunmen killed in a fiery climax to twin hostage dramas on Friday still on the loose.

But a police source revealed that 26-year-old Hayat Boumeddiene, the "armed and dangerous" partner of Amedy Coulibaly who took shoppers hostage in a Jewish supermarket, was not in France at the time of the killings.

Coulibaly shot dead a young policewoman on Thursday and then took the shoppers hostage Friday, and while police had suspected Boumeddiene may have had a role in her partner's violent acts, she was likely in Turkey then, the anonymous source said.

The source, who declined to be named, said investigators were checking whether she was now in Syria.

France deployed hundreds of troops around Paris Saturday, further beefing up security on the eve of the march expected to draw around a million.

Already, Saturday's rallies drew some 700,000 onto the streets in cities across France in poignantly silent marches after the nation's bloodiest week in more than half a century.

"The real battle is to defend freedom of thought," Yamina, a 40-year-old demonstrator in the city of Marseille, said with tears in her eyes, while marchers carried signs declaring "Not afraid!"

After Friday's dramatic events, Hollande warned grimly that the threats facing France were not over -- comments followed by a chilling new threat from the Yemen-based Al-Qaeda in the Arabian Peninsula group.

The three-day killing spree began Wednesday with an assault on the Charlie Hebdo satirical magazine in Paris that saw two brothers massacre 12 people including some of the country's best-known cartoonists and a day later, Coulibaly shot dead the policewoman.

The massive manhunt for the two Kouachi brothers developed into a car chase Friday and then a tense standoff as they took one person hostage in a printing firm northeast of Paris.

The small town of Dammartin-en-Goele was transformed into what looked like a war zone, with elite forces deploying snipers, helicopters and heavy-duty military equipment as they surrounded the pair.

With all eyes on the siege outside Paris, suddenly explosions and gunfire shook the City of Light itself as Coulibaly stormed a Jewish supermarket on the eastern fringes of the capital.

As the sun set, the brothers in Dammartin-en-Goele charged out of the building with guns blazing in a desperate last stand, before being cut down.

Within minutes, elite commando units moved in Paris against Coulibaly, who had threatened to execute his hostages unless the brothers were released.

He had just knelt for his evening prayer when the special forces struck. Explosions rocked the neighbourhood -- one lighting up the shopfront in a fireball -- and shooting erupted as the commandos burst in.

"It's war!" shouted a mother as she pulled her daughter away.

Up to five people -- including a three-year-old boy -- survived hidden inside a refrigerator for five hours, with police pinpointing their location using their mobile phones, prosecutors and relatives said.

In the printing firm, the brothers took the manager hostage, later releasing him after he helped Said with a neck wound, while a second man hid beneath a sink upstairs.

Leaders have urged the country to pull together in grief and determination, but questions are mounting over how the three men -- Cherif and Said Kouachi, and Coulibaly -- slipped through the security net after it emerged that all three were known to intelligence agencies.

As the drama reached its climax, links emerged showing the brothers and Coulibaly were close allies and had worked together.

All three had a radical past and were known to French intelligence.

Cherif Kouachi, 32, was a known jihadist who was convicted in 2008 for involvement in a network sending fighters to Iraq.

His brother Said, 34, was known to have travelled to Yemen in 2011, where he received weapons training from AQAP.

It also emerged that the brothers had been on a US terror watch list "for years".

Coulibaly, 32 -- who met Cherif Kouachi in prison -- was sentenced to five years in prison in 2013 for his role in a failed bid to break an Algerian Islamist, Smain Ait Ali Belkacem, out of jail.

Prime Minister Manuel Valls said the carnage they left in their wake showed there had been "clear failings" in intelligence.