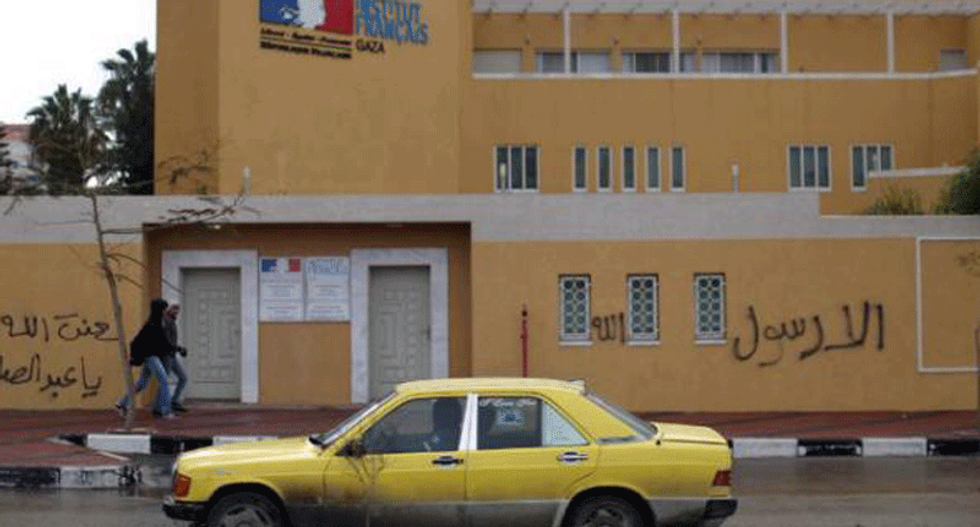 A picture taken on January 17, 2015 in Gaza City shows the walls of the French Cultural Center that were painted overnight with graffitti in reaction to a cartoon of the Prophet Mohammed published in French satirical weekly Charlie Hebdo (AFP)

Protest graffiti was sprayed outside the French cultural centre in Gaza before dawn Saturday following the publication of a new cartoon of the Prophet Mohammed by satirical magazine Charlie Hebdo.

"You will go to hell, French journalists," read one of the slogans daubed on the walls of the cultural centre compound, which has been closed since it was damaged in a fire last October.

"Anything but the prophet," read another.

Police were deployed outside the compound's main gate as well as on the adjacent main road, an AFP correspondent reported.

The cover cartoon of Mohammed carried by Charlie Hebdo on Wednesday, in its first edition since an attack on its Paris offices claimed by Al-Qaeda killed 12 people on January 7, has sparked angry protests across the Muslim world.

Most Muslims regard any depiction of the prophet as sacrilege.