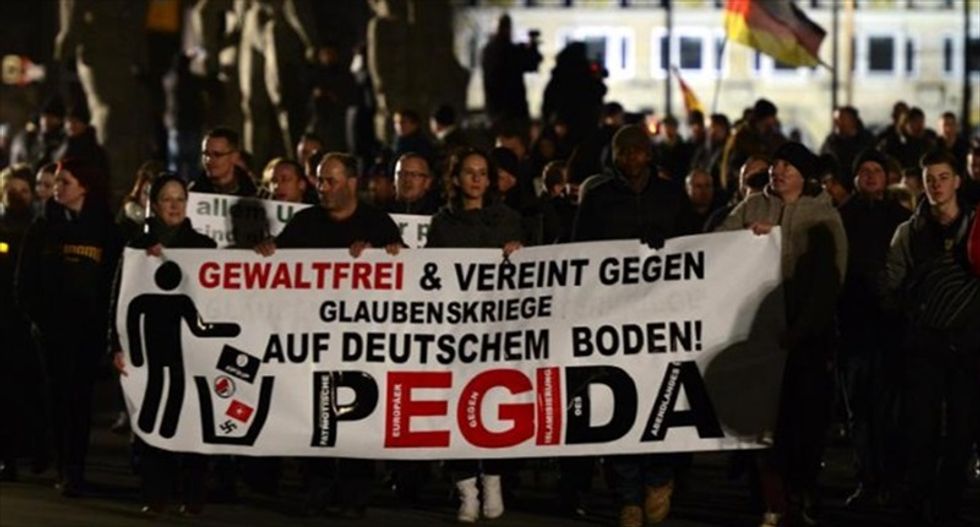 A record 25,000 people joined an anti-Islamic march in Germany on Monday, claiming their stance was vindicated by last week's Paris jihadist attacks.

However, the impressive turnout was dwarfed by 100,000 counter-demonstrators calling for tolerance nationwide.

Chancellor Angela Merkel earlier stressed that "Islam belongs to Germany" and announced she would on Tuesday join a Muslim community rally in Berlin against extremism, along with most of her cabinet ministers.

Undeterred, supporters of the self-styled Patriotic Europeans Against the Islamisation of the Occident, or PEGIDA, gathered for their 12th rally since October in their birthplace of Dresden in former communist east Germany.

The marchers waved the German national flag and held up placards that read "Fight Islamisation, stop the flood of foreigners now" and "Stop multiculturalism. My homeland will stay German".

Some carried French flags and signs that read "They can't kill our freedom" and "Je suis Charlie" (I am Charlie), claiming solidarity with those killed in the attack on the satirical weekly Charlie Hebdo.

These terrorist attacks "can happen everywhere," said protester Juta Starke, 70, who added that she immediately thought "it is Islam, it is the political ideology of Islam" when she learnt of the shootings.

Political leaders had urged PEGIDA to call off their latest rally, saying it had no right to whip up hatred against Muslims in the name of solidarity with terror victims.

"It is simply disgusting how the people behind these protests are trying to exploit the despicable crimes in Paris," said Justice Minister Heiko Maas.

Activists have also announced plans for PEGIDA-style protests in Switzerland and Austria, while other European far-right groups have voiced support for the movement.

Across Germany, however, revulsion with PEGIDA's xenophobic message has sparked growing counter demonstrations, which Monday dwarfed the anti-foreigner movement and its regional clones.

In Dresden, one PEGIDA protester carried a picture of Merkel wearing a Muslim facial veil, mocking the chancellor who has urged citizens to stay away from PEGIDA marches.

Merkel earlier Monday stressed that "Islam belongs to Germany", adding that: "I am the chancellor of all Germans".

She said she would attend a vigil at Berlin's iconic Brandenburg Gate, organised by the Central Council of Muslims in Germany under the banner "Let's be there for each other. Terror: not in our names!"

Merkel thanked leaders of Germany's four-million-strong Muslim community for quickly and clearly condemning the violence committed in the name of their faith in last week's bloody attacks in Paris.

"Germany wants peaceful coexistence of Muslims and members of other religions" and Tuesday's vigil would send "a very strong message", she said at a joint press conference with Turkish Prime Minister Ahmet Davutoglu.

Merkel and Davutoglu had on Sunday joined French President Francois Hollande and other world leaders at a huge Paris solidarity rally in the wake of the massacre of 17 people by Islamist gunmen.

She said there was still need for better inter-religious dialogue in Germany but expressed her gratitude to Muslim community leaders who "very quickly drew a very clear line and delivered a clear 'No' to the use of violence" following the attacks.

The latest PEGIDA demonstration came after a firebombing Sunday of the offices a tabloid in the northern city of Hamburg that had reprinted cartoons of the Prophet Mohammed from Charlie Hebdo.

German police were investigating whether there was a link between the show of support for the French weekly and the arson attack but let two suspects detained Sunday go for lack of evidence.

As a security precaution, Leipzig city, which saw its first PEGIDA-style demonstration on Monday with several hundred marchers, has banned displays of Mohammed cartoons.