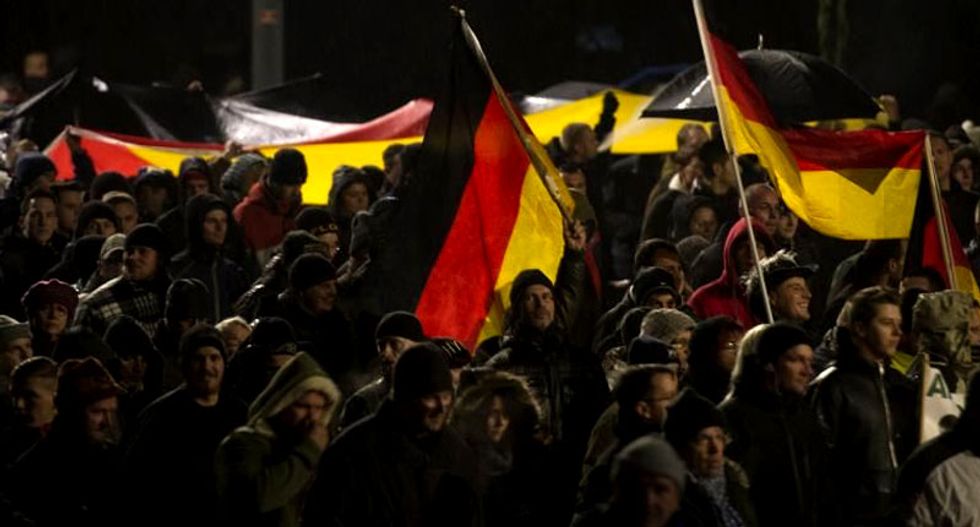 Demonstrators wave German national flags during a rally by the right-wing populist movement 'Patriotic Europeans Against the Islamisation of the Occident' (PEGIDA) on January 5, 2015 in Dresden, eastern Germany (AFP)

Germany's growing anti-Islamic movement is set to hold a new rally Monday, this time condemning the jihadist attacks in France, in a move slammed as an attempt to exploit the bloodshed.

Leaders of the so-called "Patriotic Europeans Against the Islamisation of the Occident" (PEGIDA) have asked participants to wear black armbands and observe a minute's silence for "the victims of terrorism in Paris".

Euphemistically dubbed "evening strolls" by the group, Monday's march in the eastern city of Dresden is expected to ride a wave of fear and revulsion at the killings of 17 people in France to beat last week's record attendance of 18,000.

However counterprotests are gaining momentum, with 35,000 people turning out Saturday in Dresden against the anti-Islamic group.

Several German Muslim groups have called for a silent march in Berlin on Tuesday to denounce violence and social division, which Chancellor Angela Merkel and several members of her cabinet plan to attend.

The latest PEGIDA demonstration comes after a firebombing early Sunday against a tabloid in the northern city of Hamburg that had reprinted cartoons of the Prophet Mohammed from the French satirical paper Charlie Hebdo.

It was at the Paris offices of Charlie Hebdo that gunmen first struck, kicking off France's three days of terror in which 17 people died. German police were investigating whether there was a link between the show of support for the French weekly and the arson attack.

As a security precaution, the eastern city of Leipzig, which will see its first PEGIDA-style demonstration on Monday, has banned marchers from displaying Mohammed cartoons, which have been seen at other events.

With tensions running high, political leaders even urged PEGIDA to call off the event, saying it had no right to whip up hatred against Muslims in the name of solidarity with terror victims.

"If the organisers had a shred of decency they would simply cancel these demonstrations," Justice Minister Heiko Maas told the mass-selling daily Bild.

"It is simply disgusting how the people behind these protests are trying to exploit the despicable crimes in Paris."

At a time "when the whole world is mourning and in shock over the events in Paris", PEGIDA leaders should at least "for the time being" cancel their rallies, Seehofer said.

The demonstrations, though largely limited to Dresden in former communist east Germany, have shaken the reunified country's hard-won reputation for openness and tolerance.

Merkel, who used a New Year's Eve address to call on Germans not to take part in the PEGIDA rallies and on Sunday attended a huge solidarity march in Paris, was to meet Turkish Prime Minister Ahmet Davutoglu in Berlin Monday.

Davutoglu is expected to ask Merkel to address growing anti-Muslim sentiment in Germany with concrete action, according to Turkish press reports.

Germany, Europe's most populous nation with around 80 million people, is home to about four million Muslims, three-quarters of Turkish origin.

In a survey conducted several weeks ago and released Thursday, 57 percent of non-Muslim Germans said they felt threatened by Islam, four points higher than in 2012.

And 61 percent said Islam had no place in the West, according to the study released by the Bertelsmann Foundation think-tank.

Meanwhile PEGIDA has said on its Facebook page that the killings at Charlie Hebdo in Paris confirmed its own views.

"The Islamists, which PEGIDA has been warning about for 12 weeks, showed France that they are not capable of democracy but rather look to violence and death as an answer," it said.

"Our politicians want us to believe the opposite. Must such a tragedy happen here in Germany first???"

Activists have announced plans for PEGIDA spin-offs in Austria and Scandinavia, while other European far-right groups have voiced support for the German movement.

However, even as copycat marches are planned Monday in other German cities, counterdemonstrations against PEGIDA are growing in strength.

Many of the 35,000 who hit the streets of Dresden Saturday carried signs reading "I am Charlie but not PEGIDA" borrowing from the solidarity slogan with the Paris victims.

And during offshoot PEGIDA marches last Monday, landmarks such as Cologne cathedral and Berlin's Brandenburg Gate dimmed their lights just as protesters gathered.

Late Friday, the Washington Post reported that Trump's lawyers are battling each other over legal strategy, with some wanting to present a more "aggressive" defense while attorney Christopher Kise, who scored a $3 million retainer to defend Trump against possible Espionage Act and obstruction charges wants to dial things down.