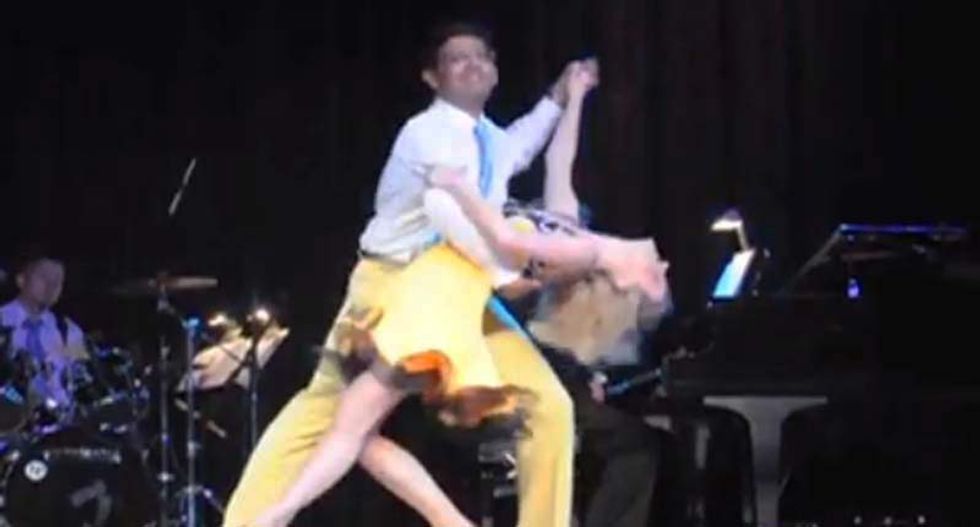 When we last saw Dinesh D'Souza, the Obama-hatin' former smart guy who has slowly descended into sub-Breitbartian wingnut lunacy after he lost his job  for putting his penis into a married lady who was not his wife during a Christian conference, he looked like he was headed off to the pokey [this is not a prison rape joke, so 'shut up'] of another kind.

As you may recall, up until his FELONY CONVICTION, Dinesh had led a fairly interesting and profitable life, working for Republican Jesus Ronald Reagan, writing policy stuff at wingnut halfway-houses like AEI and the Heritage Foundation, and living large in the rich-person San Diego suburb of Rancho Santa Fe with his blonde trophy wife, Dixie. Yes, Dixie.

Then his dick went rogue and faster than you can say, "Down boy!" he was out of work as president at a semi-fake Jesus school because he used his wang to 'thought experiment'  some adultery with that aforementioned lady at the aforementioned conference.  Dinesh zipped up and called his ouster, "a clear attempt to destroy my career and my ministry. This is viciousness masquerading as righteousness. And this is the behavior that is truly worthy of Christian condemnation."

God-bothering Maggie Gallagher took time out from her homo-hating ways to do some "Christian condemnation," calling it  "adultery," so we will defer to her because she's really good at being judgey and slut-shamey and stuff.

Fast forward a bit and Dinesh got himself busted for making illegal campaign contributions to a GOP nominee for a Senate seat in New York -- always a sure bet. When first charged, Dinesh claimed innocence, political witch-hunt! No way, Jose. Totally didn't do it!

Then the husband of the lady D'Souza was slipping his d'ick to presented tapes to the government of Dinesh telling his not-so-secret love poodle, "if he were charged he might plead guilty, but would initially plead not guilty because that 'gives him a window of opportunity to get his story out there'."

Whoopsie-doodle! or , in his case: D'oh!

This came as a bit of a surprise -- but not entirely -- to conservatives who had Dinesh's back. Ole Cap'n Ed at Hot Air wrote:

At the very least, the report raises a few questions. The race, although not specified, appears to be the Senate election between Kirsten Gillibrand and Wendy Long in New York, in which Long lost to Gillibrand by forty-five points (72% to 27%). Why would D’Souza try to push illegal contributions in the low five figures and risk criminal prosecution in a race where tens of millions of dollars were spent, and where the challenger was utterly doomed? For that matter, why use straw men when D’Souza could have just bundled for Long instead, or set up a PAC?

The answer to that is, of course: because D'Souza's an idiot.

On the criminality scale, dropping an illegal $20K into a dead-on-arrival political campaign where millions are going to be spent, is like blowing millions of dollars to set up a counterfeit penny operation. Neither one is going to get you into the Evil Genius Hall of Fame.

In the end, Dinesh rolled over like a puppy and peed on his belly, and pleaded guilty and got sent to another half-way house instead of a prison where he rightfully belongs for being both a criminal and criminally stupid.

"It was a crazy idea, it was a bad idea," D'Souza told Berman before being sentenced. "I regret breaking the law."

So here we are at the end of the year and Dinesh is celebrating America tolerating his criminal thug-life ways by posting a video of himself dancing to Johnny B. Goode with a woman who may or may not be his wife -- who can keep up with this sex machine? -- because dancing to Jailhouse Rock would have been too ironic, even for 2014.