If you're worried about censorship or bullying, conservatives are the bigger problem 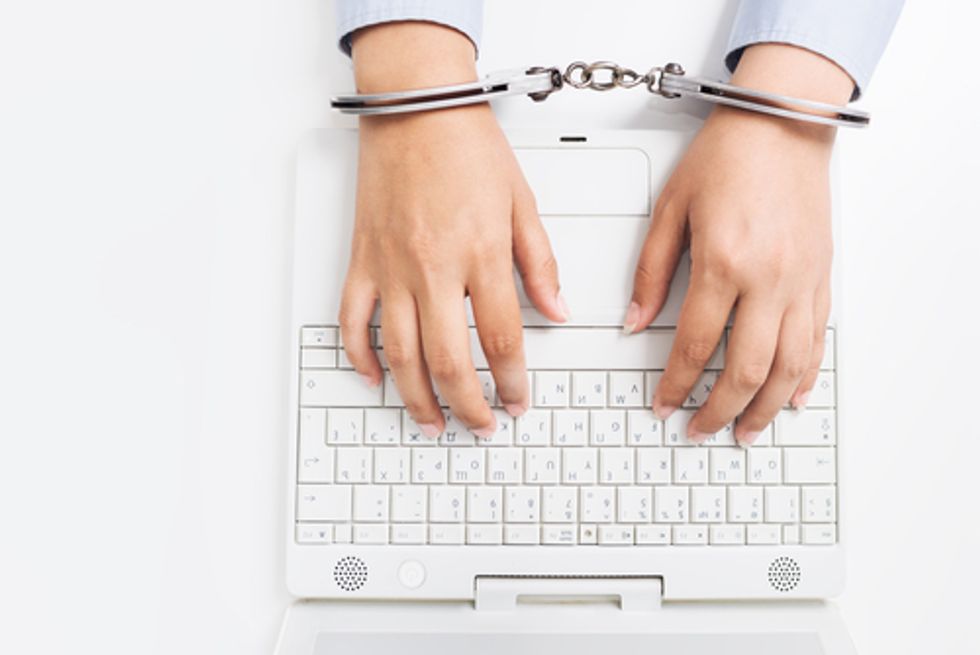 For those who are following the drama of Jonathan Chait's sloppily argued piece against "political correctness", I wrote a piece rebutting at Talking Points Memo. Since the discussions around these things tend to get flattened out with people assuming there are two completely opposing "camps", I had a lot of people trying to convince me that there are people out there who use a leftier-than-thou attitude as a cudgel to bully and control other people. There is no need to try to convince me of that. I've seen it. But I don't think Chait made that case, because he was too busy trying to silence and shame people whose main crime is talking about stuff that makes him uncomfortable. So my piece was on the irony of that, but I'll say no more as you should read it.

But it was a short piece and I overlooked a point that I think PZ Myers really lays out well: How Chait subtly implies that censorious attitudes are strictly a problem of the left.

But don’t call it “P.C.” That’s a term that raises my hackles straight from the onset: it’s the disparaging phrase used solely against liberals, judging them not by their actions but their purpose. Vandalism and harassment are not ideologically-specific tools, used only by the left; let’s deplore the tactics no matter who employs them, but as soon as you attach the P.C. label, I know right away that you are trying to target liberals only.

And that's intellectually dishonest, because the vast majority of outright censorship efforts in America today come from the right. It's not even a contest. Myers has a few examples:

I knew immmediately what specific recent events he was going to complain about. It wasn’t going to be about the Florida students who picketed a talk I gave several years ago, or the administrators who lobbied to have me ejected; those were conservative and anti-choice people, no one would call them “P.C.”, and besides, I’m just a relatively unknown college professor. It wasn’t going to be about a wealthy donor to St. John’s College getting a liberal faculty member’s contract denied; that’s definitely not politically correct, to fire liberals, but that’s perfectly OK. It’s not about teachers who proselytize in the classroom, because while they’ll moan that they’re being persecuted for being not-P.C., they’re also part of the dominant religion. Complaining about religious intrusions into secular institutions is very P.C., and therefore bad, while not being politically correct is supposed to be good.

I'll point out that the attacks on free speech that I see in covering the anti-choice movement are hair-curling. Multiple states have laws requiring doctors to lie to their patients if they want an abortion, by requiring doctors to read a script that often has false information about mental health and cancer risks of abortion, all designed to make the abortion experience as terrifying as possible. In terms of a free speech issue, having to think twice before you spout off on Twitter isn't even in the same ballpark.

But, you may object, his piece was about this problem as it pertains to the left. To which I say exactly. I'm not opposed to pointing out when liberals act in an illiberal manner, of course, but you have to be careful about not just holding liberals to a higher standard but using that higher standard to basically forgive it when conservatives do the same or worse. And make no mistake, Chait does exactly that:

It is true that liberals and leftists both want to make society more economically and socially egalitarian. But liberals still hold to the classic Enlightenment political tradition that cherishes individuals rights, freedom of expression, and the protection of a kind of free political marketplace. (So, for that matter, do most conservatives.)

So, in his estimation, liberals and conservatives stand together on one side of the line, the pro-free speech side, and only The Left, which he takes great pains to distinguish from liberalism*, is on the side of evil. It's an equation that is fundamentally dishonest in the extreme, as demonstrated by his piss-poor examples. Sure, there are some leftist bullies out there, but percentage-wise, I can tell you right now a lot smaller percentage of leftists are comfortable with the idea of censorship as a political weapon than conservatives are. It's just that we expect conservatives to stifle dissent and so it's not notable when they do. But this shouldn't be rolled up into assuming they're generally liberal on the free speech question.

On the contrary, when it comes to the bullying tactics Chait claims he opposes but whiffs when coming up with substantial evidence of, conservatives are the absolute masters. The entire point of that website Twitchy is to round up mobs of people on Twitter not to argue with liberals but to overwhelm them in harassment in hopes that they give up writing. There's nothing even like it on the left. While there have been some campaigns to get people fired on the left that have employed lies and bad faith, there's nothing on the level of the character assassination campaign that was aimed at climate scientist Michael Mann, which has even led to attempts to legally harass him based on a bunch of lies about his work. And let's not talk about what's happened to Anita Sarkeesian for daring to say video games can be kind of sexist sometimes.

Reinforcing this double standard, where a few outlier situations of leftist bullying, beefed up with examples that were actually of people just expressing themselves and not trying to silence anyone, are treated like the worst thing possible while the right's ongoing use of harassment and bullying and outright censorship is ignored? Pathetic, it truly is. Just because conservative harassment of liberals isn't novel and just because they seem beyond shame doesn't mean we should let them get away with being held to a much lower standard.

*Probably in part because this distinction is breaking down as some traditional "leftist" concerns like income inequality, racism and sexism and the like are becoming more mainstream.

There are many inane rituals that take place in the U.S. Capitol, but none that rival the tiresome conventions around the annual funding of the government known as "raising of the debt ceiling."

It's like Groundhog Gay, with Republicans balking at participating and everyone else running around in circles trying to cajole them into getting onboard so the United States doesn't crash the world economy. It is no way to run a country. This year the issues are more acute than usual because the Democratic majority is concurrently trying to pass two very large programs — the bipartisan physical infrastructure bill and the reconciliation bill that contains the vital human infrastructure program that Joe Biden and the party ran on in 2020. It's all coming to a head at the same time.