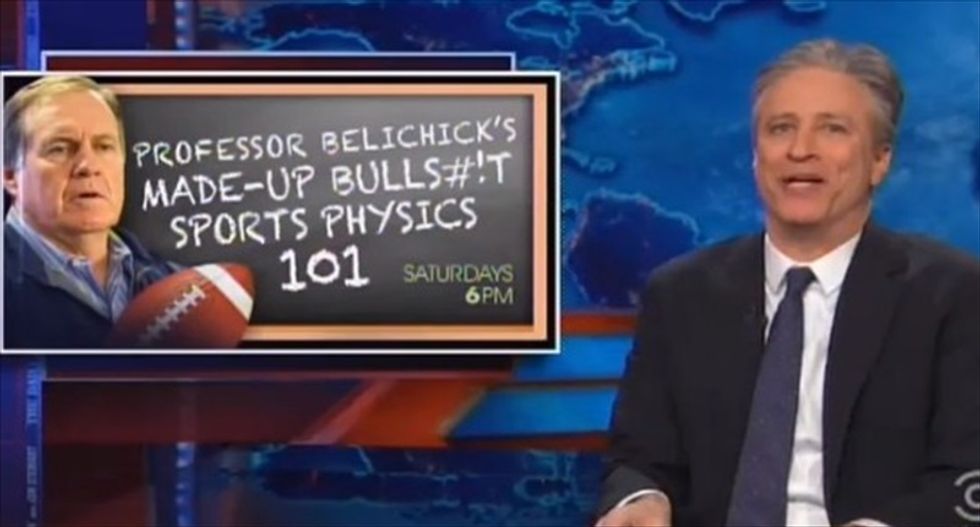 Daily Show host Jon Stewart tore into the National Football League on Thursday for worrying about deflated balls and $500,000 penalties for players who won't speak to the media instead of more serious issues.

"Are you f*cking kidding me? That's 'my company poured dioxin in a river' money," Stewart said of the fine Seattle Seahawks running back Marshawn Lynch risked incurring this week. "How is it that this guy's facing international drug cartel penalty money, but the owners and commissioner of the league have no obligation to address stadium financing shenanigans, or concussions, or domestic violence policies? Please tell me this is the stupidest iteration of the NFL's f*cked up priorities."

Not only was Lynch under pressure to attend Super Bowl media day on Tuesday -- where he brushed off every question by saying, "I'm just here so I won't get fined" -- but the league was also threatening to discipline him for wearing the wrong type of hat.

"It's just classic NFL to be more worried about what happens on top of the player's head than the damage that's going on inside it," Stewart argued. "It explains their slogan: 'The National Football League -- worrying about the wrong sh*t since 1920.'"

Instead of addressing concerns that have plagued the league all season, Stewart observed, both NFL officials and reporters covering Sunday's championship game between Seattle and New England had allowed coverage to hinge around "deflategate," the allegations surrounding the Patriots' use of under-inflated balls during the AFC championship game against Indianapolis.

After mockingly describing Patriots head coach Bill Belichick's attempt to use "bullsh*t sports physics" to explain what happened, Stewart surmised that a New England locker room attendant, "drunk on his own power," tampered with the balls.

As "proof," Stewart showed video of the attendant that was quite similar to the footage of former Baltimore Ravens running back Ray Rice dragging his then-fiancee out of an elevator last year after knocking her out.

"Those balls do not appear to be in a playable state," Stewart said. "That's just awful. The worst part is even with the tape, you know this is just gonna end with a press conference where the balls have to apologize for their role in being deflated. And [Tom] Brady walks away scot-free."