Jon Stewart clashes with Mike Huckabee: 'You don't approve of Beyoncé because she seems alien to you' 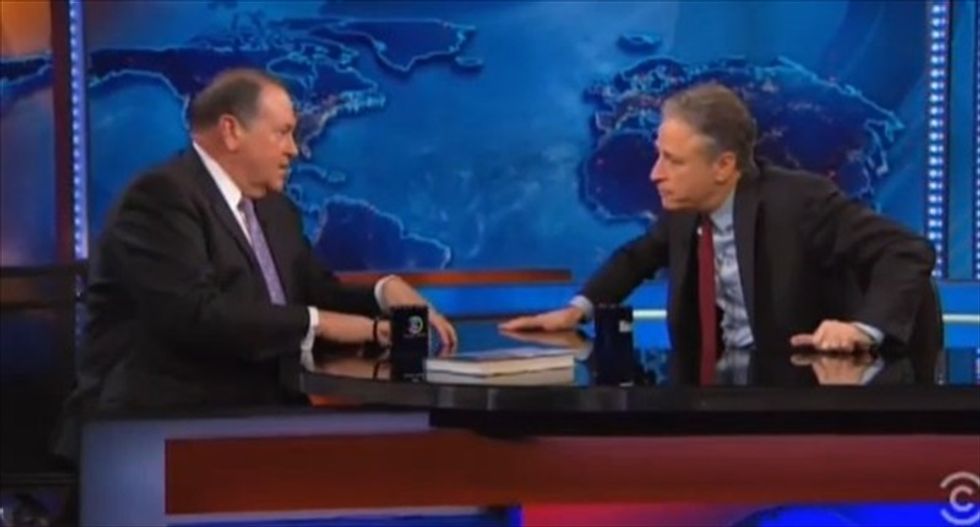 "You excuse that type of crudeness because you agree with his stance on firearms," Stewart said. "You don't approve of Beyoncé because she seems alien to you. Johnny Cash shot a man just to watch him die."

Huckabee responded by saying Nugent did not get nominated for a Grammy for the song, nor did he perform it live on national television at the time.

"My point is, that song is an adult song, geared for adults," the possible GOP presidential candidate argued. "But today, we have a very different kind of depiction and things that are considered perfectly OK for kids."

"My point is, you can't single out a corrosive culture, and ignore the one that you live in because you're used to it," Stewart countered.

Huckabee attacked the singer in his new book, speculating that her husband, rapper Jay-Z, is "arguably crossing the line from husband to pimp" in regards to her career. On Tuesday, he told Stewart that she did not need to "be vulgar" to be considered a trend-setter.

"Do you know any parent who has a daughter that says, 'Honey, if you make really good grades, someday when you're 12 or 13, we'll get you your own stripper pole,'?" Huckabee said. "I mean, come on Jon, we don't do that in our culture."

When Huckabee challenged him to read the book, Stewart quickly noted that he had.

"It ain't Shakespeare," he said, before laughing. Huckabee responded that he did not write it with the "Harvard faculty" in mind.

"The way you use 'Harvard' as a derogative blows my mind," Stewart told him.