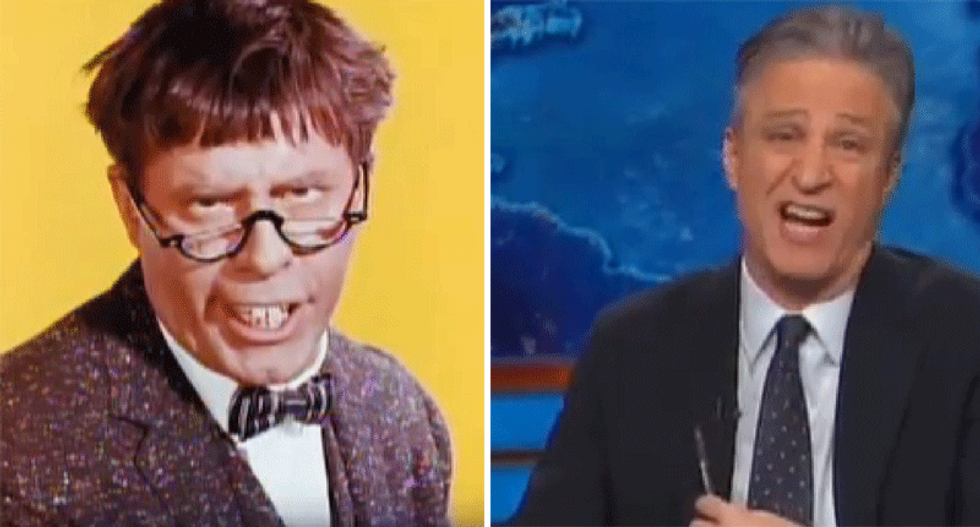 "We have similar speech issues here in America, generally erring on the side of the government allowing sh*tty people to say sh*tty things," Stewart explained. "As long as we can't see their boobs."

While France embraced the value of freedom of expression in response to the massacre against Charlie Hebdo last week, Stewart said, it was "weird" for authorities there to arrest comedian Dieudonne after he expressed sympathy online for the attackers.

"Don't get me wrong. That is a despicable Facebook post that that guy did," Stewart said. "But isn't that what the Unfriend button is for? No, France, you don't just hide them from their timeline -- that's the coward's way."

Fifty-four people in all have been arrested since the attack on charges of "defending terrorism," a situation that had Stewart admitting, "Je suis confused."

"I'm beginning to think comedy isn't France's thing," he said. "It's nothing to be ashamed of, France. You've still got painting, kissing, and food that's hard on the outside but soft on the inside -- you're the best at it. Stick to that. Stick to your bries, your baguettes, your broulez creme. Just stay away from comedy. That's our thing."

To get the point across, Stewart told the story of "The Anguished Pencil," a pencil trying to reconcile his freedom of speech with the meaning of his existence.

"Make love to me," his pencil lover asked. "Subsume your hypocrisy in the ecstasy of orgasm."

"But is not love itself speech?" the titular pencil asked her. "When speech is restricted, is love, then, not violence against the state?"

Watch the melodrama -- and Stewart's commentary -- as posted on Thursday, below.