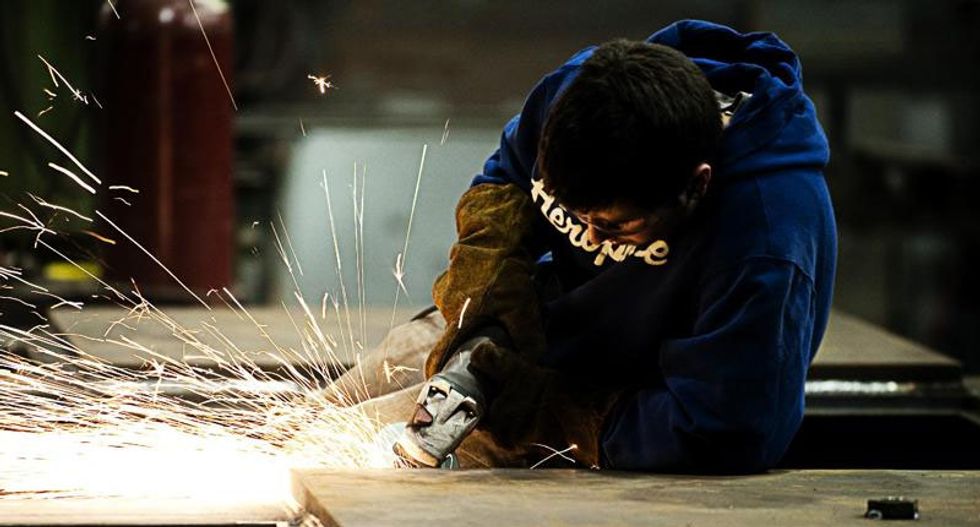 An employee of a steel manufacturer (AFP Photo/Jim Watson)

The suit comes just a day after Kentucky's Hardin County became the fifth in the state in less than a month to pass a local ordinance that prohibits unions from requiring members to pay dues in exchange for representation.

The lawsuit only covers Hardin County, but plaintiffs' attorney Irwin Cutler said the suit could expand to cover challenges to laws passed in Warren, Simpson, Fulton and Todd counties.

Proponents of right-to-work laws say they can be a tool to attract new businesses. Officials in Warren County said their community, 20 miles (32 km) north of Tennessee, has lost several opportunities to its neighbor, which is a right-to-work state.

But United Auto Workers’ Local 3047 President Renard Duvall, whose chapter is one of the plaintiffs in the suit, said he fears unions would lose power in collective bargaining negotiations, leading to reduced wages that could impact the communities where workers live.

"We have never tried to price our wages so high they run the company out of business," said Duvall, 48, who has worked 16 years as a tool-and-die maker at Metalsa’s Elizabethtown plant in Hardin County. "We want our company to be profitable."

Cutler said that federal law only allows states or territories to enact such legislation. Allowing the decision to be made at a county level could produce "an administrative nightmare" for companies with operations across a state, he said.

However, Brent Yessin, an attorney who has offered to represent Kentucky counties that pass a right-to-work ordinance called the argument simplistic and misplaced.

Since the Labor Relations Act became law, courts have ruled that counties are considered subdivisions of states and have the right to pass such ordinances, Yessin said.

Right-to-work laws exist in 24 states, but efforts to pass similar legislation in Kentucky have failed on pushback from the state's Democratic-controlled House of Representatives.

Warren County, which is home to General Motors’ Chevrolet Corvette plant, became the first county in the state to pass the ordinance on Dec. 19.

Opinions regarding the legality of county-based right-to-work laws are mixed.

Kentucky's Attorney General's office issued an opinion prior to the Warren County vote saying counties did not have the proper authority, while two former Kentucky state Supreme Court justices issued a statement in support of the counties' right to pass such laws.

Matt Laslo
WASHINGTON — Democrats won. Donald Trump lost. But, when it comes to the former president’s tax returns, it’s still unclear if this epic, nearly four-year-long battle will end in a draw, fines, or someone going to prison.

Of late, Trump and his lawyers have been on defense—battling allegations of felony tax fraud and, separately, defamation, along with suits brought by numerous police officers over Trump’s role in the Jan. 6, 2021 insurrection—but this time, it’s House Democrats who are treading lightly out of fear of fines or imprisonment if they overstep and divulge the former president’s personal financial information without legal justification.

U.S. Senator-elect John Fetterman on Friday announced two key staff hires for his office on Friday, including tapping the author of a book calling for the abolishment of the arcane Senate filibuster to be his next chief of staff.

The Pennsylvania Democrat said in a statement that he has hired Adam Jentleson to oversee his D.C. office as chief of staff and that longtime party operative and labor organizer Joseph Pierce will be his state director.