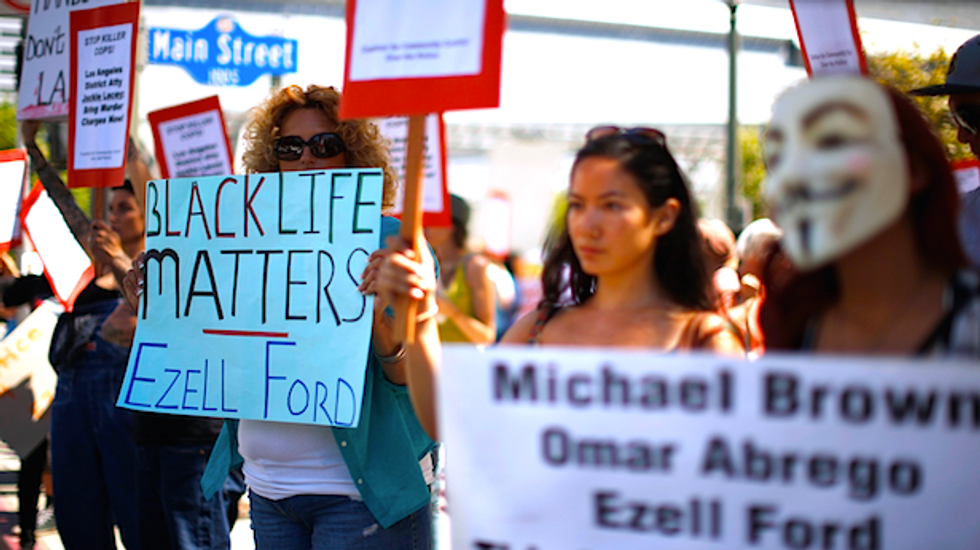 A Los Angeles police officer involved in a high-profile shooting death of an unarmed black man in August had arrested him six years earlier for marijuana possession, but the officer did not recognize him, a police spokesman said on Friday.

The Aug. 11 shooting death of Ezell Ford, 25, who according to a family lawyer had mental issues, in mostly poor South Los Angeles has raised tensions between police and some people in the city's African-American community.

Members of the Black Lives Matter movement, which began as a response to the 2012 shooting of a teenager by a Florida neighborhood watchman, have called for the two officers who shot Ford to be fired and criminally charged.

The two officers have been pulled from field duty while the shooting is under review.

The 2008 arrest of Ford was first reported by the Los Angeles Times.

Ford family attorney Steven Lerman, who has sued the city over the death, has said the officers knew Ford and that he was harmless. Lerman previously represented the late Rodney King, a black motorist whose beating by police two decades ago sparked riots after a jury acquitted the officers of assault and other charges.

But an investigation has not revealed the two officers who shot Ford recognized him when they approached him that day, said Los Angeles police spokesman Lieutenant Andy Neiman.

Police have said Officer Sharlton Wampler and Officer Antonio Villegas shot Ford after he struggled with one of them and tried to grab that officer's holstered gun. Wampler is Asian-American and Villegas is Latino, police said.

In 2008, Wampler arrested Ford for marijuana possession, but it is understandable he would not have recognized him six years later, Neiman said.

"People change, a lot happens. I don't think it's that unusual that someone wouldn't recognize somebody," Neiman said.

Ford's death came just two days after the fatal shooting of 18-year-old Michael Brown by a white police officer in Ferguson, Missouri, which gained international attention that intensified after a grand jury declined to charge the officer.

The Los Angeles Times, which obtained a police report in Ford's marijuana possession arrest, said Wampler and his patrol partner in 2008 approached a car because they smelled pot. They discovered marijuana and also arrested Ford's father and his brother at the scene, the paper reported.

Ford was later convicted of drug possession and sentenced to 180 days in jail and three years probation, according to the paper.