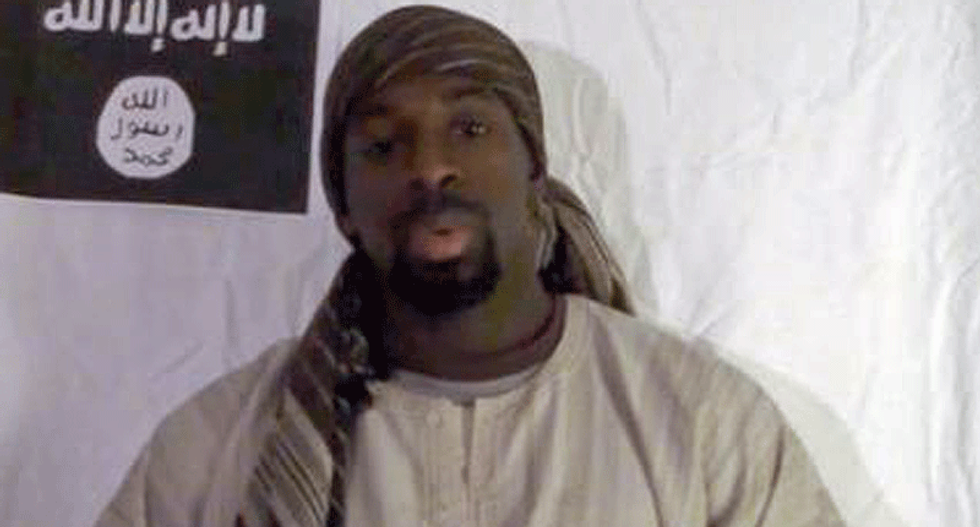 This screengrab taken on January 11, 2015 from a video released on Islamist social networks shows a man allegedly claiming to be Amedy Coulibaly (AFP)

A man resembling Amedy Coulibaly, who shot a policewoman and took hostages at a Jewish supermarket in the Paris attacks, claimed to be a member of the Islamic State group in a posthumous video released online on Sunday.

Speaking into the camera, the man says he coordinated with the two gunmen who attacked the Charlie Hebdo magazine on Wednesday, killing 12.

"I am addressing myself first of all to the Caliph of Muslims Abu Bakr al-Baghdadi," he says, referring to the leader of IS.

"I have declared allegiance to the Caliph," he says in broken, stuttering Arabic, wearing Islamic white dress and headgear.

A text that runs at the start of the video says the man is Coulibaly, and that he was responsible for the killing of a policewoman in southern Paris on Thursday and the attack on the supermarket the following day, as well as a car blown up in a Paris street that authorities have not so far linked to the attacks.

"The brothers of our team, they did Charlie Hebdo," the man says.

"I also went out a bit against the police so that it has more impact. We managed to synchronise to come out at the same time," he says, wearing a camouflage army vest in this section.

"What we have done is completely legitimate given what they have done. If you attack the caliphate, we will attack you."

The video starts with shots of the man doing press-ups in sports gear. An automatic rifle leans against the wall beside him in a later section.

Coulibaly died when police launched an assault on the Jewish supermarket in eastern Paris, where four hostages were killed.