Memo to Joni Ernst: Most Americans want more than one pair of shoes 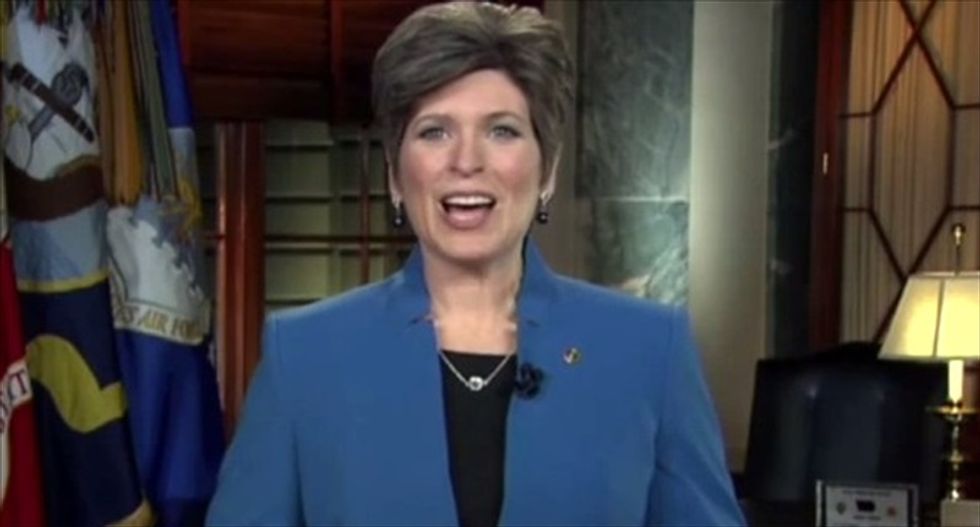 Sen. Joni Ernst (R-IA) delivers the GOP response to the State of the Union address [YouTube]

Look, I realize that the whole narrative about starting from the bottom and working your way up is a huge deal for politicians. (And Drake.) It's a classic for a reason, a way to identify both as the underdog and as a winner, so basically every sports movie ever made except for politics. Clinton did it. Obama did it. Even Romney tried and failed miserably to do it. But there was something about Joni Ernst's paean last night to deprivation in childhood that felt like it crossed the line to me.

As a young girl, I plowed the fields of our family farm. I worked construction with my dad. To save for college, I worked the morning biscuit line at Hardees.

We were raised to live simply, not to waste. It was a lesson my mother taught me every rainy morning.

You see, growing up, I had only one good pair of shoes. So on rainy school days, my mom would slip plastic bread bags over them to keep them dry.

But I was never embarrassed. Because the school bus would be filled with rows and rows of young Iowans with bread bags slipped over their feet.

Our parents may not have had much, but they worked hard for what they did have.

She does pay lip service to the idea that people should be getting paid more for the work they do, but overall, the theme of the speech was that there's something ennobling about working hard and not having much to show for it.

Or maybe it just felt that way because President Obama's speech was so very clear about how people who work hard should have more to show for it. He wasn't abstract about it, either, but laid out specific things people who work hard should be able to see in return: Child care, education, equal pay, something a little nicer than "pizza night" for a treat, that sort of thing. Sadly, he didn't have the text of Ernst's response ahead of time, or I suspect he would have said something about how important it is for someone who works full time to be able to afford more than one pair of shoes.

There's a subtle difference, is all I'm saying, in how Democrats and Republicans tell the tales of hard work and deprivation. Obama, in particular, is good about laying out concrete things that people who work hard should expect in return. Ernst's speech, however, was really vague about the relationship of hard work to getting ahead---probably because Republican policies are about making sure that most people who work hard cannot get ahead, no matter how hard they try. It makes a rough sort of sense for Republicans to push the idea that working hard to starve is rewarding because you can sit around feeling virtuous, since there's not much else they are willing to offer you in exchange for hard work. But it also seems that the romanticization of deprivation is not the greatest campaign strategy. People want a better life, and that's going to be hard for Republicans to work around.