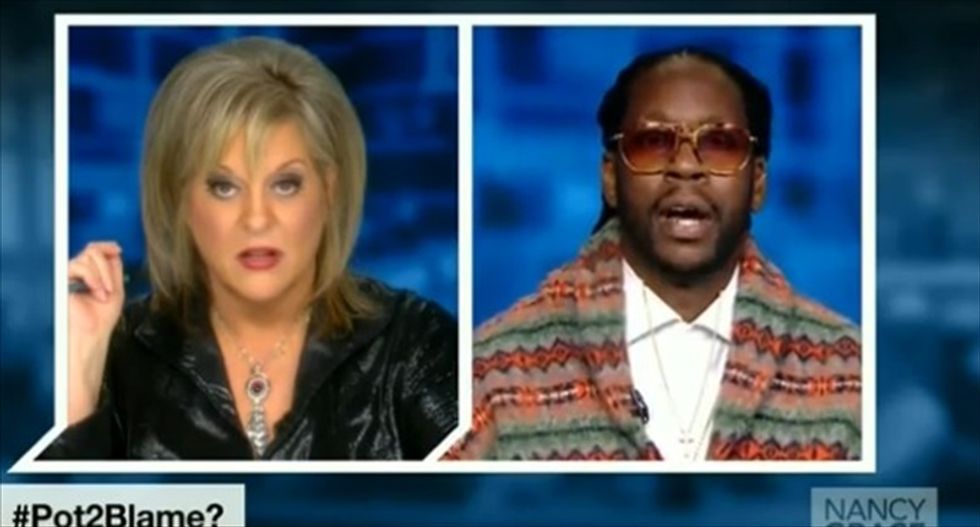 Rapper Tauheed Epps, better known in the music industry as 2 Chainz, rebuked HLN host Nancy Grace's argument against marijuana legalization on Tuesday, despite her attempts to sway him with footage from pot-related crimes involving minors.

"Do you have children?" Grace demanded at one point.

"I have two beautiful little girls, and I'm a great father," Epps replied. "I feel like everybody should take care of their own. You have kids, too, right? So it's about governing your own household. It's about taking care of your own property. It's about having some kind of structure, in anything."

Grace showed footage during the interview of local news stories involving parents accused of letting their infant children use the drug, but Epps was skeptical of her reasoning.

"I don't think that you can put a whole umbrella on the community off these two incidents that you just named," he said.

"What community is that, potheads?" She asked.

"The stoners community," Epps said. "I just feel like you can't use these particular stories to define everybody that has recreational use."

"I'm not defining everybody, so don't throw me in that pot and stew me," Grace responded, arguing that she did not understand how Epps, who has amassed a large fanbase through his work, could support making the drug legal.

"What I'm trying to say to you is, if this is legalized, then everybody is gonna have unlimited access to pot," she said. "And unlike other people that are responsible, irresponsible child abusers are going to have free access."

Epps countered by noting that the drug is already readily available, regardless of its legality. Legalizing marijuana, he said, would reduce prison overcrowding and allow more people to potentially qualify for financial or home loans without a drug-related blemish on their criminal record.

"Here's my answer to that: If you want to qualify for a home, then why don't you just not smoke pot?" she asked. "Why not just not get arrested?"

Grace also seemed disappointed that Epps would rap about smoking marijuana, among other topics, in his music, given that he graduated at the top of his high school class and attended Alabama State University on a basketball scholarship.

"Were you using pot then?" Grace asked about his high school playing days. When Epps told her he was selling marijuana then, she asked, "And would you want your children to do that?"

"Why don't you want your children to do it, man?" Grace asked loudly, seemingly tapping her finger on her desk.

"Because I did it for them," he told her. "I sacrificed that so they won't have to do that."

Epps followed up on the discussion on his Twitter account, saying he wanted to appear on Fox News' Bill O'Reilly's show.