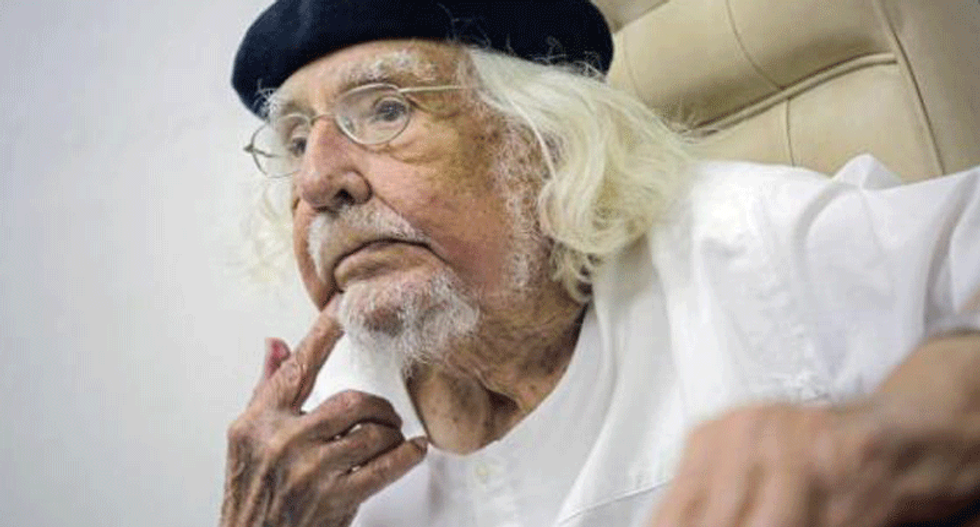 Nicaraguan priest and poet Ernesto Cardenal, pictured at his office in Managua on January 19, 2015, on the eve of his 90th birthday (AFP)

On the eve of his 90th birthday, storied Nicaraguan poet and priest Ernesto Cardenal laments what he calls the betrayal of the Sandinista revolution by President Daniel Ortega.

Ordained a Catholic priest in 1965, Cardenal left a mainly farming community he founded on the Solentiname Islands to join Sandinista rebels fighting against the Somoza family regime, which had ruled the country for nearly half a century.

"It was a beautiful revolution. But what happened is that it was betrayed," said Cardenal, who turns 90 on Tuesday, in an interview at the Nicaraguan Writers Center in Managua.

"There is now the family dictatorship of Daniel Ortega. That's not what we fought for."

Cardenal insisted he does not regret having supported the revolution, but minces no words when it comes to Ortega, who first came to power with the Sandinista National Liberation Front in the 1979 revolution.

Ortega ruled until 1990 and then returned in 2007 for a second stint as president, amassing "all the powers of the country" and "fabulously enriching himself," Cardenal said.

Hunched over and walking with the help of a cane, his thick white mane covered in part by a trademark beret, Cardenal speaks ardently of a long life of accomplishments as a politician, priest, sculptor, translator, poet and author of numerous works that have been translated into some 20 languages.

Cardenal, who made international headlines in 1983 when the late Pope John Paul II publicly reprimanded him during a visit to Managua for supporting the revolution, no longer has the same boundless energy as before. But he remains in good health.

Adamant that religion "cannot be oblivious to political struggles," Cardenal celebrated Mass in the guerrilla camps, helped create an international network of solidarity with the fighters, served as Sandinista spokesman when guerrilla leaders were in hiding and participated with Ortega in the Sandinistas' triumphant entry into Managua in July 1979.

"It was the feast of a people who had never seen anything like it in their 500-year history," Cardenal recalled in his book "The Lost Revolution" (2004).

His political poems such as "Time Zero," which he dedicated to Sandinista namesake and anti-imperialist hero Augusto Cesar Sandino, were the basis of songs that inspired the revolutionary struggle of the time.

"They form the most vigorous and effective political poetry that Latin America has produced," said Uruguayan writer Mario Benedetti.

Cardenal's disagreements with Ortega's political leadership led him to resign from the FSLN in the 1990s and join Sandinista dissenters.

"There is no FSLN," said Cardenal, only an "electioneering party that has put Ortega in power once again."

The poet also opposes the government's plans to build an interoceanic canal across Nicaragua that would rival the Panama Canal.

Led by a Chinese company HKND, the canal would go through Lake Nicaragua, the largest source of fresh water in Central America.

It is also home to the Solentiname Islands, where Cardenal recalls he once was "very happy" in the community he founded.

The canal "will be the end of the archipelago, The lake and finally of Nicaragua" he warned.

Considered one of the foremost proponents of Liberation theology, Cardenal fused his literary life with the struggle for social justice, pursuing both with dedication and simplicity.

He was awarded the French Legion of Honor -- France's most distinguished award -- in 2013, the Reina Sofia Prize for Latin American Poetry in 2012, the Pablo Neruda Prize for Poetry in 2009, and has been nominated for the Nobel Prize for literature.

Cardenal still writes but has withdrawn from public life.