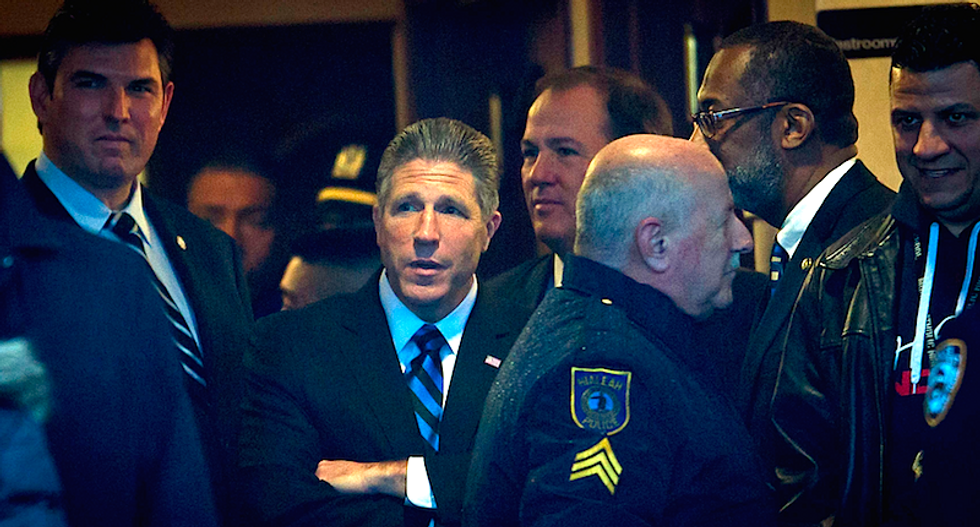 Hours after two New York policemen were shot dead in their patrol car last month, police union boss Pat Lynch accused the mayor of having "blood on his hands." Lynch's attack was prompted by what many police officers saw as the mayor's failure to defend them against criticism that overly aggressive tactics had caused the death of a black suspect.

In the weeks that followed, Lynch was the face of an extraordinary revolt by many officers against Mayor Bill de Blasio. It led to officers turning their backs on de Blasio at police funerals and a sharp slowdown in arrests and court summonses. The mayor has struggled to combat the perception he has lost control over his police force, the largest in the United States.

But now it’s Lynch who is under siege – from within his own ranks.

Lynch’s union, the Patrolmen’s Benevolent Association (PBA), is in turmoil, beset by infighting, according to interviews with more than 40 police officers and union insiders. His support among the rank-and-file is slipping, they said.

On Tuesday, a group of union insiders is set to announce a campaign to unseat him in the upcoming June election, several PBA trustees said. Since being elected in 1999, Lynch, who rose to power on a promise of term limits and reforming a union riven by corruption, has faced scant opposition.

"Pat Lynch has lost the membership,” said police veteran and union delegate Sean Guzerian. "The bosses don’t respect him, and the cops are tired of him. They look at him as a politician, not a police officer."

Lynch denies rank and file members are deserting him. "I’ve turned the old, corrupt, ineffective PBA into a member service organization where the members' needs are always first and foremost," he told Reuters in an email interview.

In fact, for most of his four consecutive four-year terms he had strong support as he brawled with mayors and police commissioners alike.

With his gelled-back hair, fiery temper, and biting Queens wit, Lynch was credited with cleaning up the union and securing the NYPD a 56 percent cumulative pay rise since 1999.

But union concessions, coupled with Lynch’s failure to negotiate a new labor contract with the department for the past five years, has stoked resentment, critics say.

Lynch blamed the lack of a contract on the "insistence on a period of zero raises" by De Blasio's administration and that of the previous mayor, Michael Bloomberg. He said the PBA was now pursuing binding arbitration. That settlement is expected to unfold in July.

The current tensions within the PBA intensified about three years ago, when the NYPD became embroiled in a ticket-fixing scandal in which hundreds of officers were accused of destroying tickets for friends and family. Lynch and other NYPD defenders called ticket fixing a longtime department norm indulged in by practically everyone.

Eventually the inquiry centered on indictments of just 10 Bronx officers. As soon as the media attention disappeared, two of the officers said, Lynch did, too.

"These officers are sacrificial lambs," Lynch said. "We have supplied them with the very best legal counsel in the country to win their acquittal, and we will continue to do that."

In a meeting in late 2011, more than 50 angry union delegates asked for Lynch to resign for not sufficiently supporting the officers swept up in the scandal. After Lynch rebuffed them, they stormed out.

“Paddy’s become like a dictator,” said union delegate Robert Andersen. “It’s his way or the highway. And that’s the end of it.”

Disputing this characterization, Lynch said he had cultivated a culture of openness.

Recently, Lynch further angered some board members when, without seeking board counsel or a vote, he circulated a petition for police officers to sign asking that De Blasio not attend their funerals if they were killed while on duty. So far, an estimated 800 PBA members, out of 23,000, have signed the petition.

De Blasio attended the funerals of the two policemen, who were shot dead by an assailant who said he was seeking revenge for the police killing of an unarmed black man, Eric Garner. A grand jury decision not to indict the policeman involved in Garner's death sparked protests and sharp criticism of the department’s practices.

At a catering hall in the borough of Queens on Tuesday, a meeting of roughly 400 PBA delegates devolved into an expletive-filled shouting match as delegates shoved and pushed one another.

On one side were Lynch’s supporters, who gave him two standing ovations during the 2-1/2 hour meeting. On the other were more than 100 delegates who were standing with the anti-Lynch insurgents, who questioned Lynch at the microphone during the question-and-answer portion of the meeting.

Lynch dismissed the altercation and said many of those opposing him at the meeting were not actually PBA members. "It actually did our members an incredible disservice, because now those who have been seeking to undermine our union and police officers in general believe that they have succeeded in dividing us against ourselves.”

Normally after such a meeting, Lynch is mobbed by members, sources said. But at Tuesday’s meeting he was a much more isolated figure, with only a handful of members approaching him, shaking his hand and then walking away.

Dissidents organizing the run against Lynch gathered at a midtown sports bar on Wednesday to talk about recent fundraising efforts and campaign strategy.

They painted a picture of a leader they used to be friends with, someone they genuinely liked and often socialized with. But they said Lynch had lost touch with his union roots and was now in denial about the scale of the revolt they say he will soon face.

Lynch said he was unruffled about the prospect of a challenge. "Elections are good things," he said.