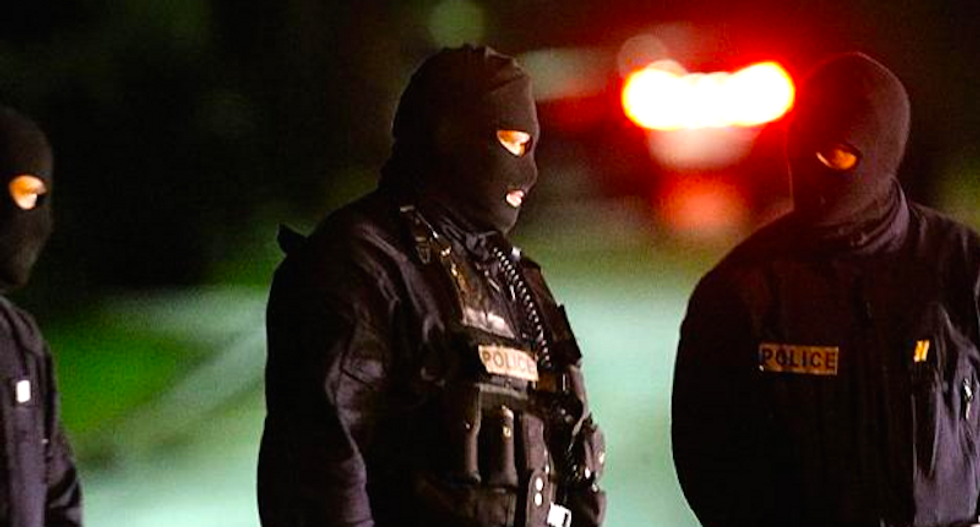 Two brothers suspected of slaughtering 12 people in an Islamist attack on French satirical magazine Charlie Hebdo held one person hostage Friday as police cornered the gunmen northeast of the capital.

Interior Minister Bernard Cazeneuve confirmed that an operation was under way to "neutralize" the suspects as the massive manhunt appeared to be reaching a dramatic climax with helicopters buzzing overhead and a huge deployment of security forces.

"An operation is under way which is set to neutralize the perpetrators of the cowardly attack carried out two days ago," Cazeneuve said in a televised statement.

Police had already exchanged fire with the pair in a high-speed car chase. Prosecutors told AFP there had been "no casualties reported" in the immediate aftermath of the shoot-out.

Prior to the standoff, the suspects had hijacked a Peugeot 206 nearby from a woman who said she recognised them as the brothers, Cherif and Said Kouachi, accused of killing 12 people in Wednesday's attack on the satirical weekly Charlie Hebdo, which repeatedly lampooned the Prophet Mohammed.

President Francois Hollande rushed to the interior meeting to be briefed on the situation as Prime Minister Manuel Valls declared that France was at "war" with terrorism, but "not in a war against religion."

"It will without doubt be necessary to take measures" to respond to the terrorist "threat," he said.

Two Air France planes were forced to abort their landing at Paris's main Charles-de-Gaulle airport and go round again 'due to the presence of helicopters... flying over the zone at low-altitude," the airline said.

The spectacular endgame came as it emerged the brothers had been on a US terror watch list "for years."

And as fears spread in the wake of the attack, the head of Britain's domestic spy agency MI5 warned that Islamist militants were planning other "mass casualty attacks against the West" and that intelligence services may be powerless to stop them.

Wednesday's bloodbath at the satirical magazine Charlie Hebdo in Paris has sparked a global chorus of outrage, with impromptu and poignant rallies around the world in support of press freedom under the banner "jesuischarlie" (I am Charlie).

U.S. President Barack Obama was the latest to sign a book of condolence in Washington with the message "Vive la France!" as thousands gathered in Paris on a day of national mourning Thursday, and the Eiffel Tower dimmed its lights to honour the dead.

And as a politically divided and crisis-hit France sought to pull together in the wake of the tragedy, the head of the country's Muslim community -- the largest in Europe -- urged imams to condemn terrorism at Friday prayers.

In a highly unusual step, President Francois Hollande was due to meet far-right leader Marine Le Pen at the Elysee Palace later Friday, as France geared up for a "Republican march" on Sunday expected to draw hundreds of thousands.

French authorities raised the security alert to the highest possible level in the region of Picardy, to the northeast of Paris, as forces tightened their noose on the brothers, Cherif Kouachi, 32 and Said, 34.

Around 24 hours into the manhunt, the brothers were identified after holding up a petrol station 80 kilometers (50 miles) from Paris.

Helicopters buzzed overhead during the night and paramilitary forces were preparing to step up their house-to-house searches.

"I don't understand: the police are dressed like Robocops in the streets, but they let us move about freely. What if we came face-to-face with them, what do we do?" asked one woman, who gave her name as Carole.

French Interior Minister Bernard Cazeneuve announced that a total of 88,000 security forces were mobilised across the country and that an international meeting on terrorism would take place in Paris on Sunday.

'Stupidity will not win'

Nine people had already been detained as part of the operation, Cazeneuve said.

And in an uneasy French capital, isolated incidents on Thursday ratcheted the tension higher, and the shooter of a policewoman, apparently unrelated to the Charlie Hebdo attacks, was still on the run.

The suspect in this case "has been identified. Two people very close to him have been taken into custody," a source close to the investigation said.

Meanwhile, questions mounted as to how a pair well-known for jihadist views could have slipped through the net and attack Charlie Hebdo, apparently in revenge for the weekly's repeated publication of cartoons mocking the Prophet Mohammed.

Cherif Kouachi was a known jihadist convicted in 2008 for involvement in a network sending fighters to Iraq.

Said, his brother, has been "formally identified" as the main attacker in Wednesday's bloodbath. Both brothers were born in Paris to Algerian parents.

A senior US administration official told AFP that one of the two brothers was believed to have trained with Al-Qaeda in Yemen, while another source said that the pair had been on a U.S. terror watch list "for years."

The brothers were both flagged in a U.S. database as terror suspects, and also on the no-fly list, meaning they were barred from flying into the United States, the officials said.

The Islamic State group's radio praised them as "heroes" and Somalia's Shebab militants, Al-Qaeda's main affiliate in Africa, praised the massacre as a "heroic" act.

In chilling testimony, one witness said a masked gunman burst into the Charlie Hebdo editorial meeting screaming "Allahu akbar" ("God is greatest"), called out "Charb!", the name of famous cartoonist Stephane Charbonnier, and fired off a hail of bullets at random.

"By chance I threw myself behind the table and he didn't see me ... a few seconds, and everyone was on the ground," said journalist Laurent Leger.