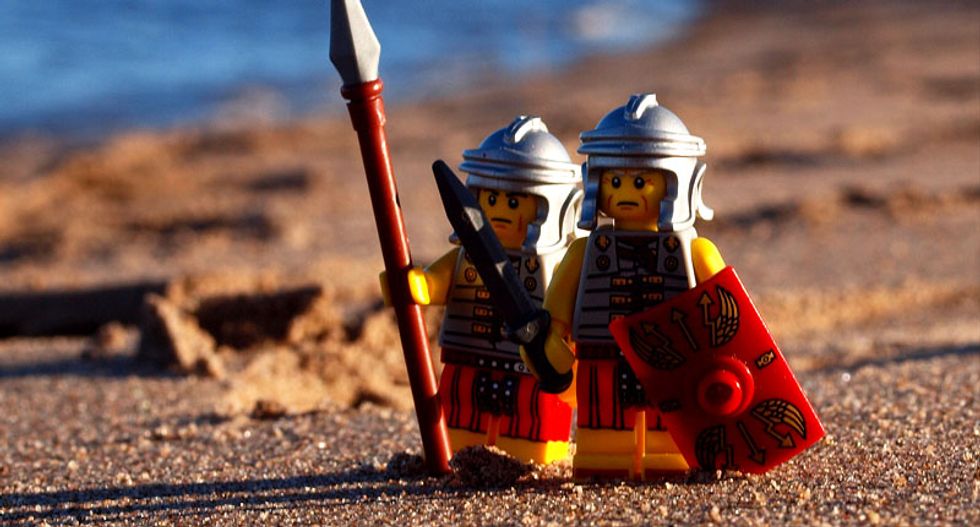 Lego Pompeii was painstakingly recreated from more than 190,000 individual blocks across 470 hours for Sydney University’s Nicholson Museum – it’s the largest model of the ancient city ever constructed out of Lego blocks. There is a mix of ancient and modern elements within the model’s narrative; displaying Pompeii as it was at the moment of destruction by the volcano Vesuvius in 79AD, as it was when rediscovered in the 1700s, and as it is today.

The historical model is the exhibition centrepiece in an archaeological museum where, until recently, displays of Lego would have been unthinkable.

The Nicholson Museum, with collections of artefacts from the Mediterranean region, Egypt and the Middle East, is a place where visitors can expect to see Greek vases, Egyptian sculpture and ceramic sherds from Jericho.

Yet since 2012, the museum has commissioned professional Lego builder Ryan “The Brickman” McNaught to recreate three ancient sites made from Lego. Together these models represent an interesting experiment; attracting a new audience to the museum space and demonstrating the importance of fun in a museum context.

The first Nicholson Lego scale model was a replica of the Colosseum in Rome.

The joy of the model was its ability to contrast the old with the new. Half the model featured the amphitheatre in antiquity; the other half featured the building in ruins with Lego modern tourists.

The model proved such a success it subsequently toured several regional NSW galleries and museums. It is currently displayed at the Albury Regional Art Gallery along with Roman artefacts from the Nicholson Museum’s collection.

The second model, opened in 2013, was the Lego Acropolis, which featured buildings of ancient Athens peopled with historical Greek figures. It is now displayed at the Acropolis Museum in Athens.

McNaught’s latest and most ambitious construction, Lego Pompeii, as with previous creations, also sits firmly at the centre of the museum’s educational aspirations.

The study of the cities of Vesuvius is central to the Higher School Certificate (HSC) Ancient History syllabus, with more than 13,000 students annually sitting HSC exams with questions on the archaeological site.

Likewise the city forms the basis of undergraduate courses on Roman history. The model provides a means of introducing students to issues of Roman daily life, architecture and the history of the excavations in a visual way, different from their classroom experience.

Educators can explore with their students features of the ancient city such as bakeries and bars, temples and marketplaces or they can examine the modern history of excavating pointing out archaeologists such as Fiorelli, Spinazzola or Maiuri all of whom are replicated along with modern investigators.

The legacy of Pompeii in popular culture is also depicted: from Bulwer-Lytton’s famous novel The Last Days of Pompeii (1834) to more recent Hollywood movies, such as Pompeii (2014). All are topics in the school syllabus and are depicted in Lego in order to stimulate both discussion and entertainment.

The Nicholson Museum is not the only museum to have used Lego and other “non-traditional” materials for displays. The Museum of Sydney’s current exhibition Towers of Tomorrow features Lego models of iconic buildings.

These and other international exhibitions such as Hampton Roads Naval Museum in he US with its program of Lego shipbuilding, form part of a much larger debate within the museum sector about how to excite audiences and the use of “non-traditional” displays is gaining popularity.

The use of a popular medium such as Lego enabled the museum to present the ancient world in a way that captures new audiences who may not necessarily be museum-goers and ensure that fun is a central component of the museum visit.

From personal experience I have seen children engrossed in the Lego display, but then actually spend far longer exploring the collection as a whole. Education and entertainment need not be mutually exclusive in a museum.

In recent times, there has been much debate on museum visitor engagement and reassessment of the concept that museums must be exclusively reserved for the “real” or the “genuine”.

I argue that the idea of a museum of exclusively “genuine” material is a relatively recent invention. Since the 18th century European museums have been filled with corkboard models of Classical architecture. There were even precedents for Lego Pompeii: Sir John Soane’s House in London has a cork model of Pompeii, while the famous 1:100 model of the city in the National Museum of Naples has been wowing visitors since the 1870s.

Plaster casts of classical sculpture were popular in collections in an era when international travel was expensive and reproduction images (either photography or illustrations) were rare.

Natural history museums and war memorials used diorama models in the early part of the 20th century. Modelling and reproductions were designed to take visitors on a journey of discovery. But by the late 20th century, models were often removed from display and sold off.

The Nicholson Museum gave most of its plaster casts of sculpture to schools in the 1960s, highlighting the thinking of the era which saw copies as suitable for education, but museums were to be reserved for genuine historical material only.

This mindset has changed again over the past decade as museums have become central to educational philosophy again. Subsequently, a number of European museums who retained their collection of casts, such as the Museum of Classical Archaeology at the University of Cambridge, and the recently revamped plaster cast courts at the V&A, are now seeing increases in popularity as the artistic, historic and aesthetic value of the casts are reassessed by a modern audience.

The use of Lego in a museum context is a 21st-century continuity of this much older tradition of displaying interpretive models. Lego Pompeii and other models of this ilk are a fun and engaging tool for reaching audiences in an exciting new way.

The Lego Pompeii exhibition at the Nicholson Museum runs until December 31, 2015.

By Craig Barker, University of Sydney