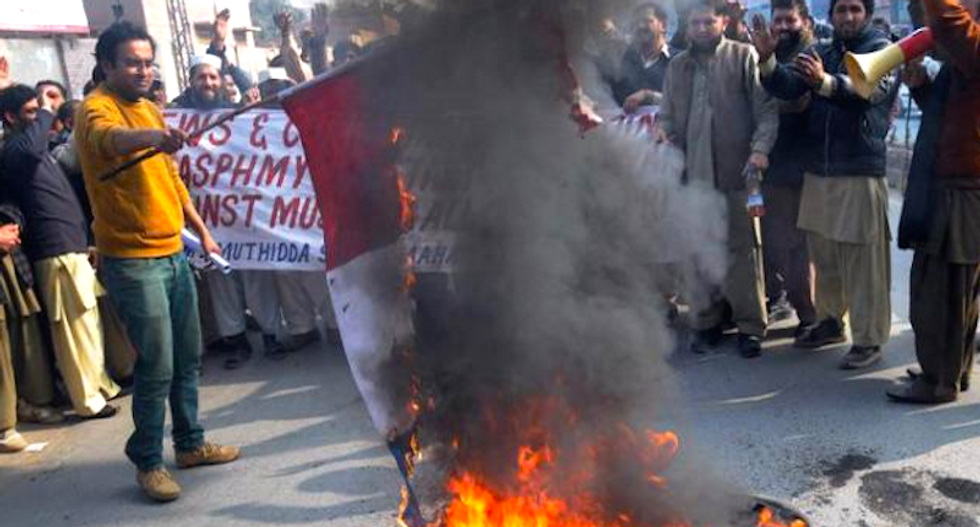 One person was shot and another injured in clashes between anti-Charlie Hebdo protesters and police outside the French consulate in Pakistan's Karachi on Friday, an AFP correspondent at the city's main hospital said.

Police fired water cannon and tear gas into the air as they clashed with protesters from the student wing of the Jamaat-e-Islami religious party, which is holding nationwide rallies against the depiction of the Prophet Mohammed by the French satirical weekly.

An AFP correspondent at the port city's Jinnah Hospital said at least two people were injured.

The rallies come a day after Prime Minister Nawaz Sharif led parliament in condemning the cartoons, regarded by many Muslims as offensive, in Charlie Hebdo, whose offices were attacked last week leaving 12 people dead.

Thousands of religious party activists are expected to turn out nationwide, including followers of Jamaat-ud-Dawa, the charitable wing of the banned Lashkar-e-Taiba militant group which masterminded attacks on Mumbai in 2008.

The Jamat-ul-Ahrar faction of the Pakistani Taliban meanwhile issued a statement lauding the two brothers who carried out the Charlie Hebdo assault, saying "they freed the earth from the existence of filthy blasphemers."

"O enemies of Islam beware! Every youth of this Ummah (Muslim community) is willing to sacrifice himself on the honour of (the) Prophet," said the statement, which was sent via email by spokesman Ehsanullan Ehsan.

Protesters in the northwest city of Peshawar and central Multan have burnt French flags on the streets.

Rallies are also being carried out in the capital Islamabad and the eastern city of Lahore.

In addition to rallies held by religious parties, lawyers have vowed to boycott court proceedings to show their displeasure over the sketches.

Rights groups say they are used to persecute minorities and wage personal vendettas.

Mobs often take matters into their own hands and lynch those accused of blasphemy, and such killers are widely feted.