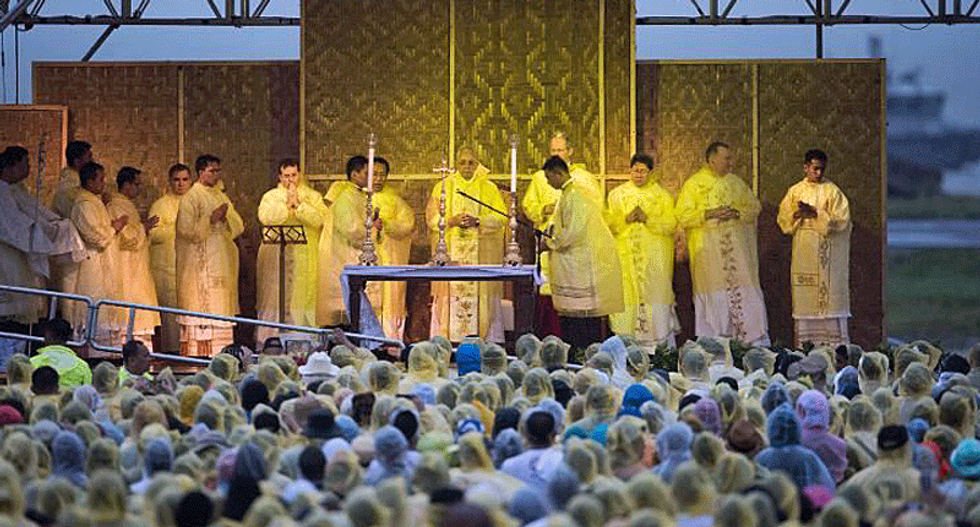 Pope Francis was forced Saturday to flee a fierce storm in the Philippines that killed a papal volunteer, cutting short a mercy mission to weeping survivors of a catastrophic super typhoon.

Wearing a yellow plastic poncho to protect him from intense rain, Francis delivered an emotional mass to about 200,000 people in the typhoon-ravaged central Philippine city of Tacloban.

However, plans to spend the entire day in Tacloban and nearby areas that were devastated by Super Typhoon Haiyan 14 months ago were ruined by another storm, forcing him to fly back to Manila at lunchtime.

"So I apologise to you all. I'm sad about this, truly saddened," the 78-year-old pontiff told thousands of people who had gathered at one church shortly before he raced back to the airport.

The pope's plane made the 90-minute flight back to the Philippine capital of Manila safely.

But highlighting the dangers of the storm, a papal volunteer at the morning mass died as steel scaffolding collapsed on her, a church spokesman said.

A plane carrying three of President Benigno Aquino's aides then overshot the runway on take-off at Tacloban and nosedived into mud, 30 minutes after Pope Francis's plane flew back to Manila. No-one was badly injured.

Philippine aviation authorities confirmed that the storm's strong crosswinds had blown the plane off the tarmac.

The trip to Tacloban and surrounding areas was one of the top reasons for the pope making a five-day visit to the Philippines, the Catholic Church's Asian stronghold, where he is a highly revered figure.

Haiyan, the most powerful storm ever recorded on land, left 7,350 people dead or missing in November 2013 as it devastated fishing and farming towns that were already among the Philippines' poorest.

The pope celebrated a truncated but still deeply emotional mass for survivors at Tacloban's airport, after receiving a joyous welcome from a crowd that police estimated at about 200,000 people.

"Long live the pope," the crowd chanted as he walked off the plane to be immediately buffeted by strong winds and heavy rain.

His welcome echoed the rapturous reception that millions gave the pontiff during the first two days of his trip to the Philippines.

Most of the people in the crowd at Tacloban wore thin plastic ponchos handed out by organisers, and the pope also put one on before walking on to a nearby stage to celebrate mass in heavy rain.

"I would like to tell you something close to my heart," the pope said as many in the crowd clutched crucifixes and cried.

"When I saw in Rome that catastrophe, I felt I had to be here. And on those very days, I decided to come here. I'm here to be with you."

He acknowledged the enduring pain experienced by the survivors.

"Some of you have lost part of your families. All I can do is keep silent. And I walk with you all with my silent heart," he said.

The pope declared Jesus would never let them down, and many in the crowd said the pontiff's words had indeed lifted their spirits.

"I can't explain how I feel. I am filled with gratitude. Never in my life did I think that I'd see a pope," 68-year-old housewife Virginia Torres told AFP, wiping tears and raindrops from her face after the pontiff left the mass venue.

Torres, whose house two hours' drive from Tacloban was wiped out by tsunami-like storm surges, said the pope's address had given her "renewed hope" even while filling her again with pain.

The Philippines endures an average of about 20 major storms or typhoons a year, many of them deadly.

But Haiyan was the strongest ever recorded on land, with winds of 315 kilometres (195 miles) per hour.

Tropical Storm Mekkhala, with gusts of up to 130 kilometres (80 miles) per hour, was the first this year.

The eye of the storm was just 50 kilometres away when the pope's plane took off for Manila, a local weather agency forecaster told AFP.

The storm is forecast to follow the pope west across the Philippines and hit Manila on Sunday, when a crowd of up to six million people is expected to hear him celebrate mass at a park.

"Those banners and tarpaulins on the road may go flying, umbrellas will be blown away, scaffolding could be blown down," Mendoza said.

If as big as expected, the crowd would surpass the previous record for a papal gathering of five million during a mass by John Paul II at the same venue in 1995.

The Philippines has long been the Church's bastion in Asia, with Catholics accounting for 80 percent of the former Spanish colony's population.