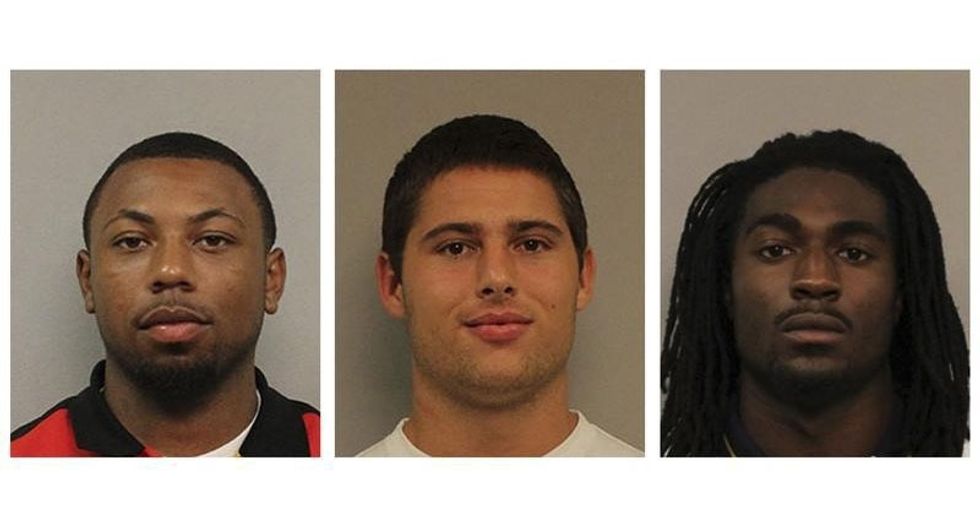 Prosecutors recounted graphic crime details on Tuesday at the opening of a trial of two former Vanderbilt University football players charged with raping a female student at the school in 2013.

The woman was raped and sodomized by Brandon Vandenburg and Cory Batey while unconscious in Vandenburg's dorm room on the morning of June 23, 2013, Deputy District Attorney General Tom Thurman told the jury.

Thurman added that Batey urinated on the victim while using racial slurs and the rape was recorded on a cell phone.

Defense attorneys countered that the two men, who both pleaded not guilty, should not be convicted because Batey was too drunk to make a conscious decision at the time and that Vandenburg did not do anything.

Batey's attorney, Worrick Robinson, sought a mistrial, saying, "I don’t know if we can recover," following Thurman's almost minute-by-minute description, and pointing particularly to the details of the urination and the slurs.

Thurman said the woman was totally incapacitated after a night of drinking, much of it with Vandenburg, and she was taken back to his dorm room.

"Within two minutes of her being in the room she is sexually assaulted," Thurman told the jury.

Batey's attorney said the football player from Nashville was influenced by a campus culture of sexual freedom, promiscuity and excessive alcohol consumption that contrasted with the manner of his upbringing.

The atmosphere "changed the rest of his life," and Batey was too drunk at the time to deliberately commit a crime, he added.

Both lawyers warned the jury to be wary of the testimony of the two, because of deals they may get in exchange for speaking.

All four men were kicked off the football team and banned from campus after the charges were leveled.

A fifth Vanderbilt football player, Chris Boyd, had faced up to two years in prison on a felony charge of allegedly helping to cover up the crime, but was placed on probation for a year in exchange for his testimony against his former teammates.

He, too, was kicked off the football team but was allowed to finish his undergraduate work at Vanderbilt.