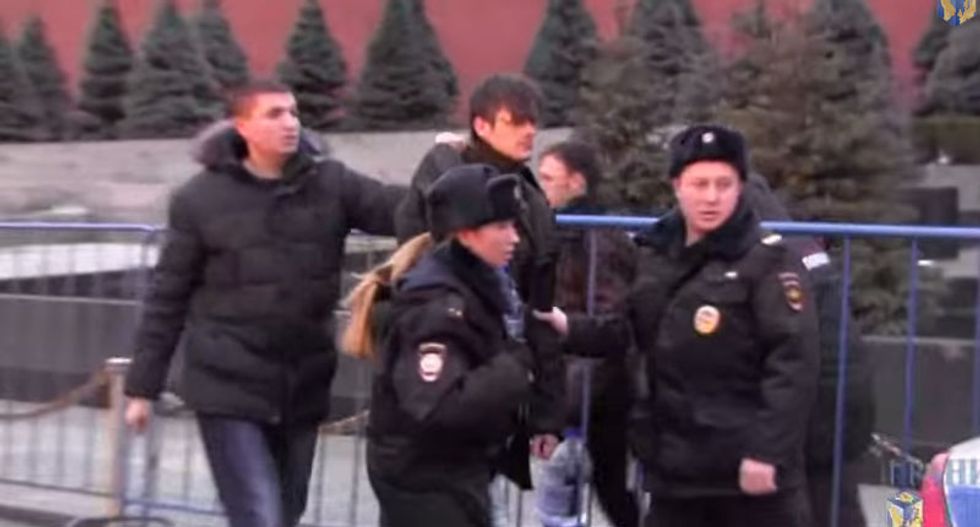 Two Russian performance artists were being held by police on Tuesday after throwing holy water at the Lenin Mausoleum on Red Square and shouting "Rise up and leave!"

The men were held overnight in a police station and were awaiting a court hearing after the protest they carried out on Monday, an Orthodox holiday, a spokeswoman for OVD Info, a website that monitors detentions of activists, told AFP.

The men were being charged with petty hooliganism, which carries a punishment of up to 15 days in police detention, the site said.

A Moscow police spokeswoman said she had no information on the case.

In a video of the performance posted on YouTube, the two young men are shown carrying 5-litre bottles of holy water marked with a cross from a church across the square.

They move aside barriers in front of the mausoleum and throw the water at the doors and steps, shouting "Rise up and leave!" several times before being detained.

On Monday, Orthodox Christians celebrated Epiphany, a holiday marking the baptism of Jesus in the Jordan river that people commemorate by immersing themselves in icy rivers and lakes.

A spokeswoman for the Blue Rider group, Irina Dumitskaya, quoted by OVD Info, said that the aim of the performance was "to demolish the myth that Lenin lives forever by attempting to resurrect him on the Epiphany holiday just as Lazarus was raised from the dead."

She referred to a Biblical story in which Jesus performed a miracle to raise Lazarus from the dead.

Red Square, closely monitored by police, saw Pussy Riot perform a protest song against President Vladimir Putin in 2012 while in 2013 performance artist Pyotr Pavlensky nailed his scrotum to the ground to protest against police control.

The continued display of the Bolshevik leader's body in the Mausoleum divides Russians. While most back the removal of his body, many Communists ardently oppose this.

A 2012 poll by independent polling centre Levada found that 25 percent thought Lenin's body should remain in the Mausoleum, while 53 percent thought he should be buried.

A poll last year by Levada found that 51 percent of Russians assessed Lenin's role in history as positive.

A video of the performance can be seen below: