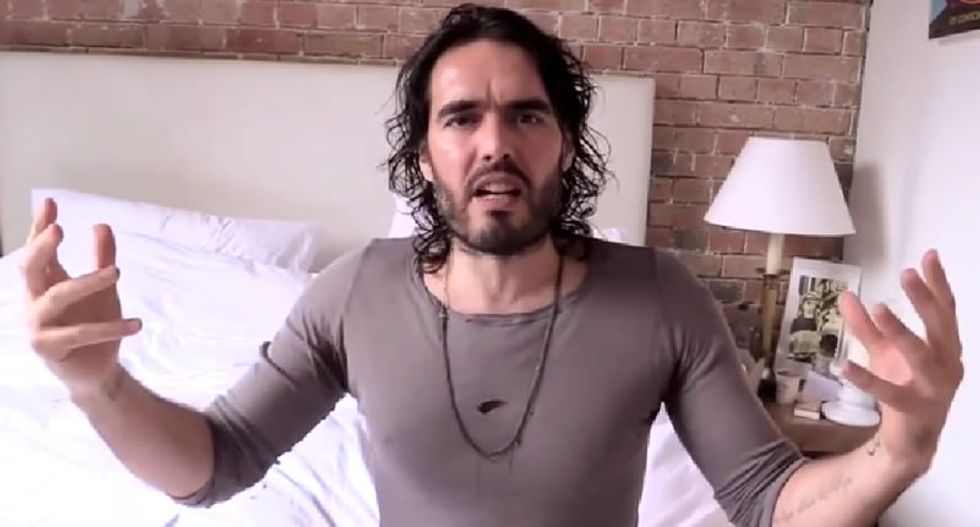 On the latest episode of The Trews, British comedian and activist Russell Brand attacked American media outlets for their baseless and insulting speculation about former Olympian Bruce Jenner and the possibility that he is undergoing gender reassignment.

"For certain sections of the media," he began, "transphobia seems to be the most recent accepted and encouraged form of prejudice now that racism and homophobia are not tolerated."

"It's interesting, isn't it? How as we sort of grow and accumulate more information, we can't really be homophobic anymore because being gay is not really an issue, and we can't really be racist -- but we can still be transphobic, can't we?"

Brand then cuts to a clip of an entertainment journalist saying that "Bruce Jenner is counting down the hours until Halloween so he can throw on a dress, carry around a purse, and not have so many people answer questions!"

"Doesn't this seem like Blade Runner or some dystopian film in which you see a bit of television and everything's a bit 'Hello, we're evil now!' When it's a celebration of the worst aspects of values?"

He then cuts to a clip from TMZ, in which a staffer asked, "What the Hell is wrong with Bruce Jenner? It looks like he has boobs!"

"'He looks like he has boobs!'" Brand repeated, mockingly, adding that "it's like he's laid out on a mortician's slab to be judged. Like in life we're already subject to this kind of scrutiny, and to what end?"

"What this does," he continued, "is it sanctions people to be judgmental and cruel towards transgender folk -- and this is mainstream media. Mainstream media -- it's the stream, and it's the most main stream that there is. So when people see someone in the street who looks transgender, they say, 'What's my opinion on transgender again? It's to point and judge!'"

Brand returns to the TMZ "roundtable" in which the participants are critiquing Jenner's nails.

"The level of scrutiny," Brand responded, "like, I suppose one day these artifacts will be strewn in some wasteland, like Egyptian and Greek civilization ended, and in the ashes -- these are the artifacts that we'll leave. Extraterrestrials will pick through it wondering what kind of people we were -- bullies!"

After playing a clip in which another entertainment reporter said that he believed Jenner was being bullied until he saw "the evidence," Brand replied, "like bullying is an evidence-based discipline!"

"You know, you're right," he said in the voice of a bully, "the evidence is insurmountable -- you are a four-eyed black gay Muslim Jew!" and then he mimed the bully beating his victim.

"This climate of violence and judgment and bullying is violent -- is a violence in its own nature -- and all of these things are real, like ripples in a lake or heat disrupting the air on a hot day."

Watch the entire episode of The Trews below.